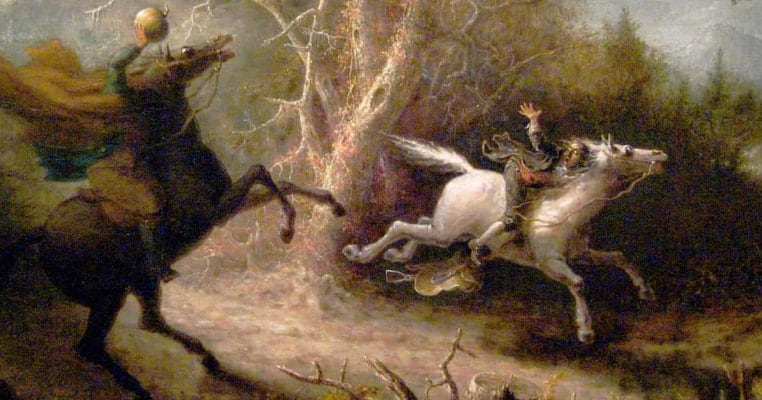 The story of Ichabod Crane in The Legend of Sleepy Hollow has inspired the minds of many for over a hundred years. Washington Irving’s short story inspired films and a recent TV series, Sleepy Hollow. Ichabod was obsessed with Cotton Mather’s stories about ghosts and witchcraft, which Crane firmly believed to be real. Let’s look at the connections of Irving and Crane’s obsession with witchcraft, as well as the supernatural presence and homosexuality.

Ichabod Crane’s story is told through the papers of Diedrech Knickerbocker. Ichabod is from Connecticut, and is the head schoolmaster of Sleepy Hollow. He is described as a tall, skinny man and very stern when it comes to the schoolchildren. He falls in love and vies for the attention of Katrina Van Tassel, the daughter of a rich Dutch farmer. Brom Bones, the town hero, is also after her affections and beloved by the town even though he is a ruffian. Ichabod longs for the rich game land Katrina will inherit with succulent pigs, ducks, and other animals.

Ichabod attends a party at the Van Tassel home, where he proposes to Katrina after seemingly courting her, though Brom Bones was also trying to court her. Katrina turns Ichabod down, and he is sent home sullen and depressed when he hears a strange sound. At the party, many men told of ghost stories and the story of the Hessian Headless Horseman, a soldier in the Revolutionary War who lost his head due to a cannonball. Ichabod firmly believes the horseman is following him when the Hessian appears and chases Ichabod.

Ichabod believes that if he crosses the bridge by the church, the Hessian will disappear in a puff of fire and brimstone, just like the stories say. The Headless Horseman did stop at the bridge but threw his head at Ichabod causing him to blackout. The next day, after Ichabod didn’t show for school, the town went looking for him. The town found his hat and a smashed pumpkin head at the bridge lying in the water. He was never to be heard from again, though stories and myths floated down to Tarry Town that he was alive and became a politician, among other professions.

Society today, and in the past, believed women were the cause of supernatural happenings and witchcraft. Most literary texts that critics evaluate are the texts of the famous Salem Witch Trials in 1692. Vetere states that “The textuality of witchcraft is evidenced uncannily in writings on the Salem witch trials. Bernard Rosenthal writes that regardless of writers’ skepticism about witchcraft, its motifs, its literary conventions, if you will, draw them in inevitably.” (Vetere 123) Vetere is speaking about the gender ideologies that are present in these texts as well as other pre-19th-century literary texts. Literary texts that inspire ideologies of witchcraft invoke the reader, and can firmly enthrall them. These works are meant, as Rosenthal says, to draw them in.

How Does Witchcraft Come Into Play In “Sleepy Hollow”?

Sleepy Hollow remains thoroughly female-dominated, meant to eradicate the weaker men like Ichabod. The tales circulated in Sleepy Hollow revolve around the masculine Headless Horseman, which haunts Ichabod on his ride home. Because of his belief in witchcraft from Cotton Mather’s works, he begins to see the Headless Horseman in his mind and tortures his body. In this way, The Legend of Sleepy Hollow turns its audience into Ichabod Crane, eradicating the weak men and women, making them firmly believe in witchcraft or not believe.

Vetere also states “In ‘Sleepy Hollow’ for instance, the narrator acknowledges the maleficia of the matrons’ storytelling, but attempts to limit it strictly to the home and even to label it a form of nurturing. Ichabod always listens to the tales of ‘the Old Dutch wives’ inside a cozy domestic space: by the hearth, ‘as they sat spinning by the fire, with a row of apples roasting and sputtering along the hearth” (Vetere 137). With this statement, it was to show that the women of Tarrytown had the power over men, that they did not want the Old Dutch ways to die because of men who were not of that descent marrying their daughters.

Witchcraft plays a huge role in the short story, for Tarry Town is “a colonial American ‘bewitched’ rural community” (Vetere 131). The town is fascinated by stories of ghosts, spirits, witches, and hauntings which stoke the fires of the Galloping Hessian of the Hollow tale. Irving writes that Tarry Town is “under the sway of some witching power that holds a spell over the minds of the good people.” When Ichabod sits at the fire with the Old Dutch wives he listens “to their marvelous tales of ghosts and goblins, and haunted fields, and haunted brooks, and haunted bridges, and haunted houses, and particularly the headless horseman, or Galloping Hessian of the Hollow.”

Women carry on the folktales of the town more so than the men, and because of the masculinity of the headless Hessian, the wives use his tale to eradicate men who of course threaten their way of life. Ichabod’s own belief of the folklore around the town caused him to be expelled from Tarry Town, which is what many townsfolk were hoping for, including Brom Bones. Though the headless horseman is seen as the elite male figure, Brom Bones is that physical force behind the verbal maleficia. The verbal maleficia is carried on by the women, the folktales they pass on to others through the generations. They are the “best judges” on the matters of history, for they are the ones who pass their history and tales verbally to others.

What Makes Witchcraft So Horrifying, and How Does It Work?

Stories of witchcraft and magic have been written down and verbally passed on for hundreds of years. A reader is enthralled by it, for it is mysterious and foreign to them for those who do not practice the Craft. From Shakespearian age to today, readers enjoy books and films about witchcraft. Witchcraft is an unknown concept to most readers, and the majority is frightened by it which further enhances their curiosity. Authors, such as Irving, write stories about magic and witchcraft because people enjoy the mystery, learning about something they know nothing about, or try to get over their fear of something they don’t need to be afraid of.

What makes witchcraft so successful is the fact that people believe in it. If readers and practitioners of the Craft believe in magic, then magic comes to life and really works. When someone doesn’t believe in witchcraft or magic, it doesn’t work. Because Ichabod believed in the Craft and the stories of the Old Dutch, it made his fear come alive and the headless horseman appears and comes after him. When it comes to witchcraft, it is all about believing in it which makes the reader so enthralled by it, gaining interesting responses out of the readers.

Ichabod is described as a man who isn’t very masculine or good looking. Many other mediums have changed Irving’s description, making it more appealing to the audience. Irving describes him as a gangly type, and quite ridiculous looking. In the 1999 film adaptation, director Tim Burton cast “quirky hunk Johnny Depp as Ichabod Crane,” which changed the audience’s view of Ichabod. Johnny Depp is now viewed as one of the sexiest men in Hollywood, which gave the audience something pleasant to view while watching a gruesome horror film.

With film adaptations of literary works, the goal is to please the audience rather than be a purist and stick strictly to the text. The new TV show adaptation aptly named Sleepy Hollow has Ichabod in the present day, back to stop the Headless Horseman’s serial killing spree along with the help of the town’s Lt. Abbie Mills. The show involves magic, the Hessian having been brought back from the dead by an Occult dealing with dark magic. Ichabod was also resurrected since he has the blood of the Hessian mixed with his from the beheading during the war.

The TV show itself is also geared to appeal to the audience today, through television media since over the years books have lost their appeal. The original storyline has also been changed for audience response. Ichabod has killed the Hessian in battle during the Revolutionary War when originally Ichabod was never in the war and his story takes place many years after the Hessian’s death. He is also portrayed by a good-looking actor in the series, which appeals to the audience and the storyline is also appealing for anyone who isn’t a literary purist.

Since the original storyline from the novel is changed, the TV series adds a lot more elements of magic than before. In Tarry Town, there are two Occult groups, one for the forces of evil and the other for good. Ichabod is forced to join forces against the dark Occult to stop them and the headless horseman. Witchcraft has come a long way from the Middle Ages where people were burned for the belief in magic and herbalism, to being more accepted and seen as a normal way of life and often intrigues others. There are rare cases in other 3rd world countries where witches are burned for their beliefs and still ridiculed.

Plummer, Laura. “Girls can Take Care of Themselves”: Gender and Storytelling in Washington Irving’s “The Legend of Sleepy Hollow.” Studies in Short Fiction 30.2 (1993): 175. Print.