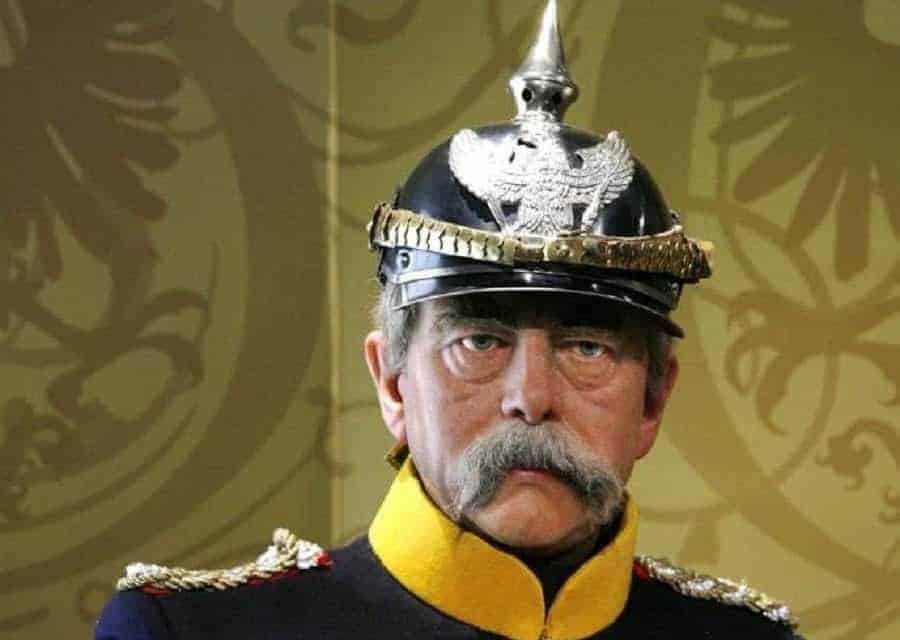 Bismarck has forged a reputation for being a diplomatic genius but he certainly wasn’t afraid of sending Prussia to war. Wilhelm I became emperor in 1861 and within a year, he named Bismarck as his chief minister. The duo was to forge a great partnership as the Kaiser was content to sit back and allow Bismarck to have things his way; which is all the Iron Chancellor ever wanted.

Throughout his life, Bismarck tried to cultivate the image of belonging to the Prussian Junker class; wearing military outfits was one way of doing this. However, he only served in the army for a brief period of time before returning home and establishing a career as a diplomat. Yet for all the negotiating skills he showed later in his career, he began by initiating a series of wars to expand the Prussian Empire.

The three short wars he waged from 1864-1870 is where the term ‘blitzkrieg’ comes from. By 1871, Prussia had established the Second Reich which lasted until 1918. The Second Schleswig war between Prussia and Denmark began on February 1, 1864. It was part of Bismarck’s grand plan for German reunification. He knew Austria was the greatest obstacle so he engineered the conflict as a means of weakening Austrian power in Europe.

Bismarck formed an alliance with Russia after refusing to get involved in its fight with Poland. He promised to help France in its invasion of Belgium and struck a deal with Italy whereby the Italians would help Prussia if it was invaded by Austria in return for possession of Venezia. In 1863, the King of Denmark declared Schleswig and Holstein to be part of his country. Despite being rivals, Bismarck forged an uneasy alliance with Austria and defeated Denmark easily.

He then crafted the Treaty of Gastein with Austria; Prussia would take Schleswig while Austria would control Holstein. Bismarck knew it was an unworkable treaty as Austrians needed to travel through hostile Prussian territory just to reach Holstein. Austria appealed to the German Bund and it backed the Austrians in the dispute. Bismarck announced that the Bund was invalid and declared war on Austria in 1866.

The Austro-Prussian War, also known as the Seven Weeks’ War, began in June and ended in August 1866. It was an easy Prussian victory as the previous alliance with Italy came in handy. At the end of the war, Prussia kept all the territory it has captured, it set up a North German Confederation with a federal parliament (called a Diet), received compensation from Austria and received a guarantee that Austria would stay out of German affairs.

Bismarck wasn’t done with his warmongering just yet. France was the last major hurdle to German unification so the Iron Chancellor began the process of weakening his enemy before starting a war. He used diplomatic skill to keep Russia, Italy and Britain neutral and received his excuse for conflict when a relative of Wilhelm I was offered the vacant crown of Spain. The French demanded that the relative reject the offer, but Wilhelm refused on his behalf. Bismarck published The Ems Telegram to provoke the French who subsequently declared war on Prussia.

Once again, Prussia easily won the war and France lost its territory in Alsace-Lorraine. It also had to pay compensation of £200 million to Prussia. The French never forget this humiliation and it was one of the many factors surrounding the outbreak of WWI. Bismarck now had his Prussian empire and his fill of war; the next step was to keep it intact without the need for conflict.

3 – He Managed a Remarkable Balancing Act

Bismarck faced two challenges in his role as Chancellor of the new German Empire. First, he needed to keep the empire strong by handling domestic issues and improving the economy. Second, he had to retain the balance of power in Europe and prevent Germany’s enemies from seeking revenge for the defeats they suffered.

On the domestic front, he spent much of the 1870s in the cultural struggle (Kulturkampf) against the Catholic population who made up over one-third of Germany’s population. He placed parochial schools under state control and expelled the Jesuits from the country. Bismarck was clever enough to see the threat of socialism and decided to become allies with the Catholics to fight against the bigger danger.

By the time of unification in 1871, the German Empire was in excellent shape. It possessed an organized society, large domestic workforce and enormous natural resources. Germany was now the economic powerhouse of Europe and Bismarck looked to consolidate its power by getting the government to subsidize industrialization. The result was a huge increase in steel, iron and coal production. He also understood the need for improved worker welfare which is why a range of benefits were introduced in the 1880s which I covered in the Pensions section.

Although German had the potential to be the powerbroker in Europe, its location meant it was always in danger of a concerted attack by its enemies. In theory, if the hostile countries around Germany could unite, they had the ability to wage a ruinous two-front war. As a result, Bismarck knew the importance of making sure that either France or Russia remained an ally.

By 1888, Bismarck was acutely aware of the potential of a European war and warned the Reichstag about the possibility in a speech. He had created a delicate house of cards that would topple the moment someone less able than him took control.

4 – His Work Was Ruined By an Idiot Emperor

Kaiser Wilhelm died in 1888 and was replaced by Freidrich II. The new monarch reigned for just 99 days as he succumbed to cancer of the larynx. Bismarck did not have a plan in place to deal with Friedrich’s replacement, Wilhelm II, as he assumed he wouldn’t live long enough to serve under the impetuous Kaiser.

Wilhelm’s beliefs were completely at odds with those of Bismarck. The relationship between the two was a disaster from the beginning as the Kaiser opposed his Chancellor’s foreign policy and preferred one of German expansion to make the empire great again. The slow, careful and fruitful diplomacy of Bismarck was replaced by direct confrontation with Germany’s enemies. The monarch quickly marginalized Bismarck and forced him to retire from his office in 1890. In later life, Bismarck wrote that Wilhelm’s reckless policies would endanger the empire and, a crash would come within 20 years if things carried on as they were.

The new leader of Germany pursued an aggressive program of expansion and acquired territories in China, Africa and south-east Asia. Under Bismarck, the German navy remained small and relatively insignificant as a means of appeasing the British. Under Wilhelm II, the German navy expanded dramatically and built 17 dreadnoughts. The British were alarmed at this sudden growth and felt under threat. They retaliated by expanding their own naval program.

Bismarck had barely left office when his delicate system of alliances began to fall apart. The Reinsurance Treaty with Russia was not renewed in 1890 which presented Germany with a serious problem in the event of war. The Iron Chancellor was not yet done with politics and was elected to the Reichstag as a National Liberal in 1894. However, Bismarck was so embarrassed that he was taken to a second ballot by a weak Social Democrat that he never took his seat. He divided his time between his estates at Varzin and Friedrichsruh and waited in the faint hope that he would once again be called upon to help his nation.

The summons never came although Wilhelm II did visit him in 1897 and Bismarck once again warned him of the consequences of his actions and made his eerily accurate 20 years prediction. In the same year, he famously said that a European war would one day come from “some damned foolish thing in the Balkans.” Bismarck’s health deteriorated rapidly from 1896 onwards and he died in 1898.

His prediction of war proved to be correct as Wilhelm’s aggression angered Germany’s neighbors and resulted in the dissolution of the alliances Bismarck tried so hard to protect. Russia joined France and Britain in the Triple Entente of 1907. This was Germany’s worst political nightmare; three of Europe’s most powerful nations had combined against it. The panic-stricken Wilhelm created the hasty Triple Alliance with Italy and Austria-Hungary but was still in a disadvantageous position. By 1914, the Great War had begun and all of Bismarck’s careful maneuvering and diplomacy was for naught.