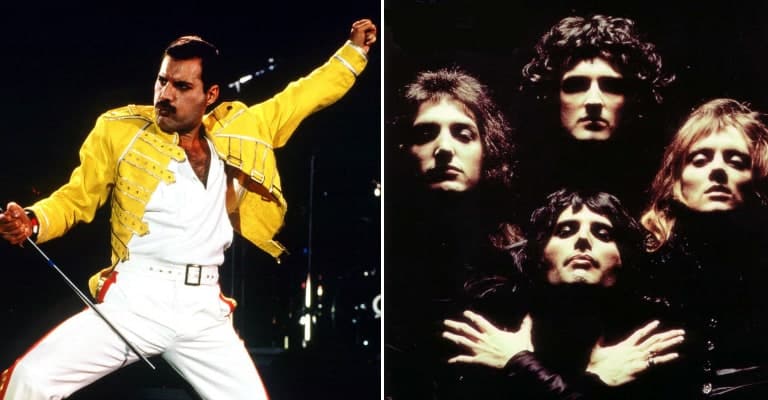 27. Freddie Mercury Was the Original Lead Singer for Queen

However, you might say that he actually joined the group Smile. He became the lead singer – the group only had guitarists and a drummer. Smile officially disbanded in 1970, but Freddie, Brian, and Roger remained together. John Deacon joined them.

He was born in Zanzibar in 1946. His parents had moved there from India so that his father could maintain his job within the British Empire. They were Parsis, meaning that they were of Iranian descent and their ancestors had fled to India during the Arab conquests of the seventh and eighth centuries.

25. Freddie Mercury Came From a Family of Zoroastrians

Parsis were historically Zoroastrians, followers of what is possibly the world’s oldest monotheistic faith. Zoroaster, aka Zarathustra, was the prophet of Zoroastrianism and lived in Iran at an unknown time but centuries before the birth of Christ. The word “star” comes from “Zoroaster;” unsurprisingly, the religion relies heavily on astrology.

24. He Grew Up in Zanzibar and India

Though born in Zanzibar, at the time part of the British Empire, he was sent to study at St. Peter’s boarding school, a British-style school, near Bombay, India. There, he took piano lessons and formed a band with some of his peers. As a teenager, he returned to his family’s home in Zanzibar.

23. His Family Fled Violence in Zanzibar and Settled in London

The Zanzibar Revolution was a populist uprising in 1964 in which African nationalists overthrew the Sultan of Zanzibar and his mainly Arab government. To escape the violence, the Bulsaras fled to England and settled down in Feltham, an area that is now part of London.

He could proficiently play the piano and had an innate sense of rhythm and tempo. His claim to fame, though, was his voice. He could sing across four octaves, going from low bass to a high tenor in just a few bars. He has been consistently lauded as the best rock vocalist of all time.

When Freddie joined Smile, or the band disbanded and rebanded, he decided on the name “Queen,” which ultimately stuck. It was one syllable, catchy, and aesthetically pleasing to the ears. He thought the name was “splendid.” Today, the name is iconic with the lead singer himself.

Brian May had been a student at Imperial College when he formed Smile. During Queen’s early days, the band went through numerous bass players while trying to get a record deal. No companies were interested, so they mostly played gigs at May’s alma mater.

The music producer John Anthony heard them in 1972 and wanted to enter into negotiations. Queen was able to use the same equipment that had been used by Elton John and the Beatles, so they signed a deal the next year. The band members then began compiling their first title, which would be eponymously titled “Queen.”

He had long adopted the name “Freddie,” which was more British-sounding than Farokh. He chose the last name “Mercury” from a line in the song “My Fair King,” which says, “Mother Mercury, look what they’ve done to me.” “My Fairy King” was one of many Queen songs that talked about the fantastical land of Rhye, which Mercury had invented.

It uses the astrological signs of the band’s four original members – not surprising since he has Zoroastrian roots. Roger Taylor and John Deacon were both Leos, so he used two lions. The Cancer crab was for Brian May, and the two Virgo fairies were for Freddie.

Despite his Zoroastrian roots and his use of astrological symbols in the Queen logo, Freddie Mercury did not put any stock in astrology. He believed that he was too intelligent and rational a human being to believe in that kind of stuff. Nonetheless, he was inspired by Zoroastrianism.

15. The Band’s First US Tour Was With “Mott the Hoople”

Queen’s first album didn’t attract much mainstream attention, but it did garner enough positive reviews to put them on the track to greatness. Following its release, the band toured the US as the opening band for a group known as Mott the Hoople.

The band’s second album, released in 1974, clocked in on record charts in the United Kingdom by hitting number five. The following album, “Sheer Heart Attack,” reached number two in the same year. Their signature musical style would dominate the UK for decades.

13. The Following Album Was the Most Expensive Album Ever

“Queen: A Night at the Opera” cost £40,000 pounds to produce when it was released in 1975. Adjusted for inflation and converted to American dollars, that’s the equivalent of $385,000. Up until that point, no album had ever cost that much money to produce.

12. “A Night at the Opera” Introduced the World to Bohemian Rhapsody

Bohemian Rhapsody, written entirely by Freddie Mercury at his London home, took three weeks to record and, in some sections had 180 overdubs. Four recording studios had to be used to record the song fully. It became one of the best-selling singles of all time.

The music video to Queen’s iconic song took only four hours to record and five hours to edit. In total, the entire music video cost only £4500, just a fraction of what the song itself required to produce. Nevertheless, the music video was a hit.

10. The Songs Lyrics Are Cryptic

Queen fans have, for decades, tried to decipher what the underlying meaning of the lyrics to Bohemian Rhapsody is. It talks about the Qur’an, the devil, Galileo, and poverty, among many other things. Freddie Mercury, who wrote the lyrics, insisted that they are meaningless and are just “rhyming nonsense.”

9. Freddie Mercury Was a Cat Lover

He had as many as ten cats at any given time and loved them as much as, if not more than, any humans in his life. When he had enough money to buy his mansion, he gave each of his cats their own bedroom. While on tour, he would call home and insist on talking to them over the phone.

8. Brian May Built His Own Guitar

He called it Red Special. He and his father built it together when he was a teenager, using wood from a 300-year-old mantelpiece. He wanted an instrument that he wouldn’t just play, but that would interact with him and the surrounding environment, and Red Special did just that.

7. They Performed In Front of the Largest Television Audience Ever

The Live Aid concert propelled the band to an even higher level of global stardom. They went on tour the next year and performed at Wembley Stadium in London. The live performance became a record which went platinum five times over. The tour would be Freddie’s last.

By 1988, fans of Queen noticed that Freddie, now 42 years old, looked thin and ill. He denied that anything was wrong with him, but the previous year, he had tested positive for HIV. The disease proliferated during the 1980s, particularly among the gay community. Freddie became one of its most high-profile victims.

4. Brian May Wrote A Song For Freddie

“The Show Must Go On” was written by Brian May in honor of his continued efforts to continue singing and contributing to the band despite his struggles with AIDS. It was released in October 1991, just a month before Freddie passed away from the disease.

Freddie became increasingly ill, so much so that May doubted he would be able to sing “The Show Must Go On.” He didn’t make his illness public until less than 24 hours before he passed away. He died of bronchial pneumonia, which was brought on due to complications from the disease.