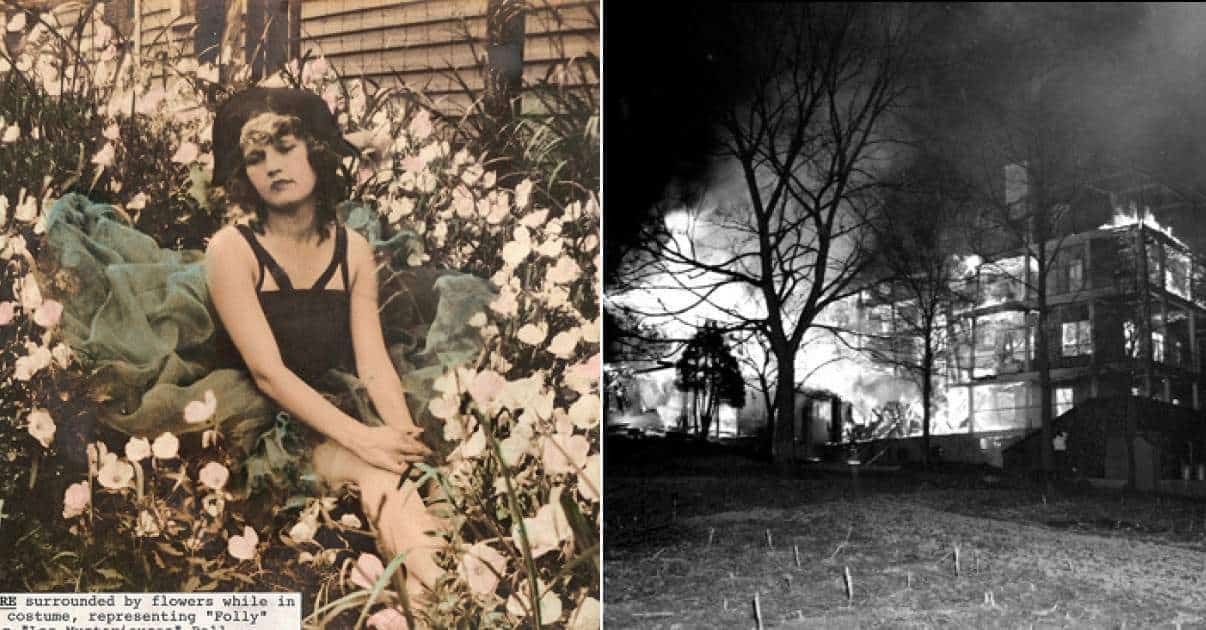 Tucked in the mountains of Western North Carolina, a woman looks out from a window. Her clothes plain- much plainer than the magnificent costumes she donned in her youth. The woman’s eyes glitter with ghosts of wild parties, bubbling champagne and loud music. But the room she sits in is silent. She brushes a stray hair from her face and catches a glimpse of her aging hands. The same hands that brought a child into the world, painted countless pictures and wrote words of joy and grief. Now they sit dormant, like her once sharp mind.

Zelda Fitzgerald sat in a room, sedated, awaiting electroshock therapy on the evening of March 10, 1948. But Zelda was not always this shadow of a figure sitting in an asylum, possibly reminiscing on more colorful parts of her life. Zelda Sayre Fitzgerald was once renowned as a Jazz icon during the Roaring Twenties.

Her early, privileged life allowed her to throw extravagant parties, have rebellious rendezvous and flirt with some of the most renowned people of the decade. Born in 1900, in Montgomery Alabama, Zelda came from a wealthy family and enjoyed the perks that comes with prestige. Zelda was the vibrant, headstrong youngest daughter of Alabama Supreme Court Justice Anthony Sayre and Minnie Machen Sayre. Their high status and expectations for her daughter rubbed off on the young Zelda. Despite her charming demeanor and lovable character, many believed Zelda’s biggest character flaws were her attention-seeking ways. However, others suggest this particular quality, along with her undeniable intelligence, is what made her so intriguing as an acquaintance and muse.

In her own diary she wrote about her high school experience:

“I ride boys’ motorcycles, chew gum, smoke in public, dance cheek to cheek, drink corn liquor and gin. I was the first to bob my hair and I sneak out at midnight to swim in the moonlight with boys at Catoma Creek and then show up at breakfast as though nothing had happened.”

From this passage, a reader can get a clearer view of the confident young woman that charmed and scandalised so many, including her future husband, F. Scott Fitzgerald. Zelda’s powerful voice not only graced the pages of her diary, but she pursued writing from a young age. Her literary career is one she received much criticism for from her husband and would later contribute to their tumultuous marriage.

At a country club dance in 1919, Zelda and F. Scott Fitzgerald met; much like two large asteroids crashing into one another. When Zelda met young Lieutenant Scott Fitzgerald, an Irish-descended Yankee from Princeton University, her parents found him unsuitable and advised her not to get involved. Both fiery and hungry for life, they socialized at the dance and went their separate ways- but not without leaving a mark on the other. F. Scott was utterly captivated by her tenacity and flirtatiousness. Some recall his remarks on meeting Zelda: “I love her, and that’s the beginning and end of everything.”

However, F. Scott was low on Zelda’s list due to her high debutante status. So when he proposed marriage to her the first time, she declined. However, her interest in F. Scott as a suitor peaked as his debut book, This Side of Paradise, was picked up by a publisher. She quickly changed her answer to his proposal and they married in 1920. But their marriage would soon become known as a passionate and toxic one. The newlyweds were caught up in the glamour of the age, wallowing in the euphoric principles of the era and created a rocky foundation for their young love.

Now, we know this era as the Jazz Age. Everything about traditional life and expectations was shifting; women kissed men they did not intend to marry, wild music filled nights, revealing dresses and women with cropped hair cuts. These scandalous new trends filled this time – and were led by Zelda and F. Scott.

Less than a year after their vows, Zelda discovered she was pregnant with their first child. On October 26, 1921, the couple welcomed Frances “Scottie” Fitzgerald to their family. Shortly after, they moved to Long Island, New York, amidst their Jazz Age ideals. The move proved to be the first hit on their financial struggle; their extravagant spending and parties hurdled them into financial ruin. The family moved to France in 1924 where F. Scott composed his most famous novel, The Great Gatsby. During this time in France, Zelda discovered one of her true passions: painting. With a great American novel and painting in toe, the family briefly returned to America.

After living in Wilmington, Delaware, for a short time, Zelda yearned for a change of pace. In 1927, she added ballet to her ever-growing talents when the family travelled back to Paris. Zelda was soon invited to dance with the Royal Ballet of Italy in 1928- an offer she declined in lieu of writing short stories. But her love for keeping things fresh and new would suddenly take a turn as her mental state quickly declined.

Some may know that Zelda served as muse to F. Scott for many of his novels, including This Side of Paradise, The Beautiful and the Damned, The Great Gatsby and Tender is the Night. A bone of contention about using Zelda as such a prominent muse was that F. Scott would go as far to steal excerpt’s from her diary in his novels.

While Zelda was known for her socialite ways, her literary works reveal a much deeper character. Her first published work, Save Me the Waltz, was a semi-autobiographical novel with thinly veiled characters living out the events of Zelda’s own life. Despite its relative success, F. Scott criticized this work as being “unoriginal” and frequently brushed her literary success aside. F. Scott was known for accusing Zelda of plagiarising his work to add to her own, however, she reciprocated this accusation by saying he stole from her work. These accusations began to build resentment and dysfunction in their rocky marriage. A marriage fraught with alcoholism, violence and mental health concerns.

It can be said that the Fitzgerald marriage almost perfectly mirrored the age they lived in. In the early 1920s, the couple and economy thrived and lived in an artificial glow. But just like the stock market crash of 1929, their extravagant lifestyle crumpled beneath them and they were once again left in financial ruin.

In addition to the financial strain, Zelda was diagnosed with schizophrenia in 1930. This diagnosis is now hotly debated among psychiatrists; many believe this was a misdiagnosis. Her symptoms were characteristic with that of a bipolar disorder diagnosis. She suffered from periods of manic depression and also experienced moments of extreme energy and happiness. Whatever mental illness Zelda suffered from, she and F. Scott decided to treat her maladies with a popular mental remedy of the age: mental institutions.

The beginning of her treatments in these mental clinics were as beneficial to Zelda as they could be. While staying in these facilities, she found solace in writing and painting. She finished her second novel, Caesar’s Things and loved painting New York Cityscapes as well as scenes from her favorite story, Alice in Wonderland.

So the question remains: Did Zelda really go insane? History likes to tell us, yes. But it’s possible that she was just a tragic anecdote in the long journey to understanding mental illnesses. During this time treatments such as electroshock therapy, lobotomies, and other inhumane methods of “stabilizing” the brain were popular. So, while many experts agree that Zelda likely suffered from some type of mental illness, these methods utilized during her time at these facilities probably contributed to her mental collapse.

Her final stay in a mental facility was in Highland Hospital in the mountains of Asheville, North Carolina. Places in the mountains, such as Asheville, were renowned for their healing properties- due to fresh, mountain air. One such establishment that boasted its premium location in the therapeutic North Carolina mountains was the Grove Park Inn. It was here that F. Scott spent much of his time- rarely visiting his wife, just across the valley. While Zelda was fighting her internal battles, he was battling his own demons. The novels that made F. Scott Fitzgerald so popular an author now haunted him; he was constantly trying to crack the code to success again, to no avail.

He rented two rooms in the Grove Park Inn, one for writing and the other for sleeping. One expert on F. Scott’s life claims: “”He came to the Grove Park Inn and chose these rooms so that he could overlook the main entrance,” English Professor, Brian Railsback explains. “He could see the cars that were pulling up and he could see if there were any interesting women who might appear to be single and what were they wearing.”

“This was a place where he hoped that he would be restored, find discipline and then maybe find subject matter,” Railsback said. “What a wonderful place to find interesting subject matter … Wealthy people going in and out.” But this tactic for inspiration did not work. F. Scott found the Depression era readers to be far less interested in the lifestyles of the rich and famous. Many called F. Scott and his wife ghosts of the Jazz Age; always yearning for those luxurious years of wildness and glamour.

Inspiration dwindling, F. Scott and Zelda saw each other less and less in those final years. “They both realized that they were very upsetting to each other and it was very difficult for them — when they were both fragile — to be together for any length of time,” Railsback says. So the two once-love-birds sat isolated in the same area; so close, yet so far apart. This pattern of struggle and fragility continued for 12 years- Zelda in and out of Highland Hospital and F. Scott traveling West to find glory in writing.

Zelda Fitzgerald outlived her husband by eight years. F. Scott Fitzgerald died in 1940 in Hollywood, where he’d begun pulling himself together, drinking less and writing The Last Tycoon — an unfinished masterpiece. Leaving his wife behind in Asheville to continue her fight for mental stability.

But it can be said that Highland Hospital was a bit different from other facilities at the time. Traditionally, in those days before psychotropic drugs, patients with chronic mental illness were shackled or put in straitjackets. The treatment philosophy at Highland was different, focusing on exercise and diet rather than restraining their patients. But the final time Zelda checked herself into Highland Hospital would be her last.

On the night of March 10, 1948, a fire tore through the belly of Highland Hospital. Many say that Zelda Fitzgerald and other patients were locked and restrained in their rooms, awaiting electroshock therapy. Another popular theory is that the fire was set by a vengeful nurse, but there is no definitive proof- the fire wiped all evidence. The fire took the lives of nine women in the facility. To this day, staff and visitors recall the Jazz Queen who touched the lives of so many treating her.

The stigma of mental illness during this era clouds the perspective of Zelda’s life much of the time. While there are accounts that tell Zelda’s wild personality traits led to her family’s demise, there are just as many attesting to the short temper and cruelty of F. Scott Fitzgerald. When looking at these accounts of historical figures, it is important to remember that we are shedding these stigmas of mental illness and finding fresh perspectives of important characters who lived their lives with these struggles. Thanks to healthier outlooks on these issues, we are fortunate enough to gain an influential female icon in Zelda Fitzgerald- with all of her beautiful imperfections.