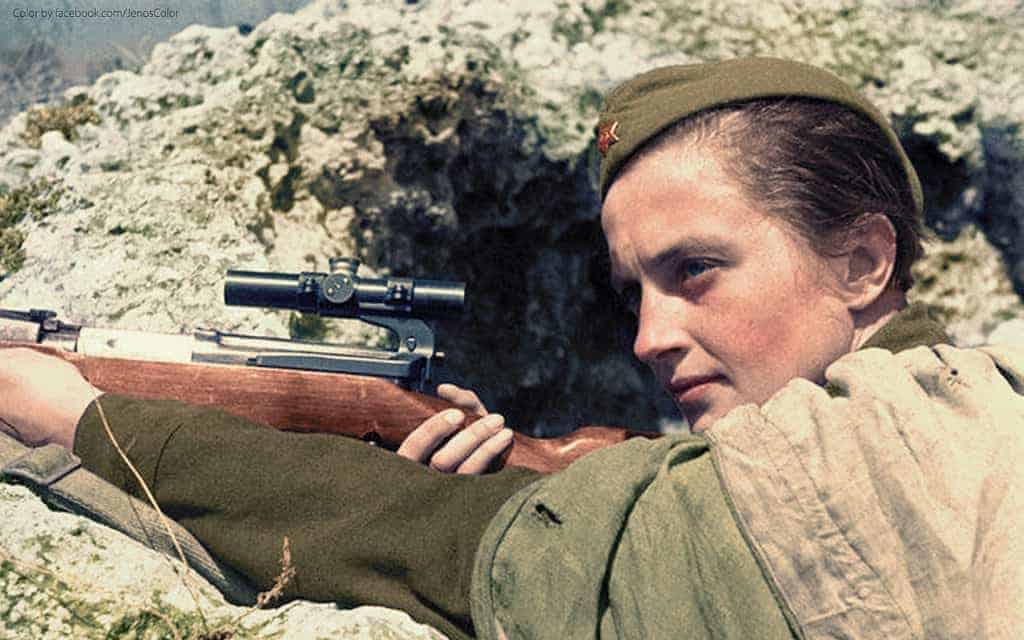 Pavlichenko got her first “official” kill a few weeks after being sent to active service. She was in position near the front when the Germans began hammering the area with artillery. Deciding that nothing could have survived the explosions, the Germans sent scouts in to take the position. But Pavlichenko was still alive, and she quickly sent the German scouts back to their lines, but not before forcing them to leave the bodies of two dead comrades. Over the next two months, Pavlichenko racked up more kills as the Germans pushed the Soviets back to Crimea.

Pavlichenko described one incident when the Germans set a trap for her along a road. As five soldiers with submachine guns waited for Pavlichenko, she decided to turn the tables. “I detected the trap,” she said, “got into a position where their bullets couldn’t reach me and poured lead into what became a trap for them.” With deadly accurate rifle fire, Pavlichenko killed three of the soldiers in a few seconds. As the others decided it would be better to run than face Pavlichenko, she killed another as they fled. She then picked up the submachine guns and returned to base.

By the time the Soviets were preparing to defend the city of Odessa, Pavlichenko had already killed 187 of the enemy with her sniper rifle. This made the young sniper a hero for the Soviets and a target for the Germans. The Germans, of course, had their own snipers. And they immediately sent them to hunt down Pavlichenko before she could do any more damage. This led to a dramatic series of duels as Pavlichenko and the German snipers began hunting each other in the ruined streets of the city. And the Germans pulled out every trick in the book to bring Pavlichenko down.

There were a lot of different ways that snipers could try to get the enemy to reveal their position. For instance, they would take a helmet and mount it on a stick. Then, they would let it slip out of cover, giving the enemy sniper a tempting shot. When the sniper fired, the shot would reveal their position. Pavlichenko quickly learned not to fall for this trick in her duels with other snipers. So, the Germans hunting her had to get even more creative. Pavlichenko recounted one incident where an enemy sniper released a cat to lull her into a false sense of security.

“After trying the helmet trick [he] sent a cat out,” she said, “either to distract me or to fool me into belief that nobody would be around where a cat could parade by so unconcernedly.” When Pavlichenko didn’t take the bait, the enemy sniper pulled out a human-sized dummy dressed in a German uniform. And when that didn’t draw any fire, he assumed Pavlichenko wasn’t nearby. But she was. And when he took a look through his binoculars, Pavlichenko killed him. While Pavlichenko won that duel, the Soviets were still being pushed back. And Pavlichenko’s fight was about to get even more intense.

When Odessa fell to the Germans, Pavlichenko was evacuated to Sevastopol for a final defense of Crimea. The fighting was intense as the Germans threw everything they had at the city. Pavlichenko and the sniper teams she trained inflicted heavy casualties on the Germans through it all. By now, she had 309 kills to her record. The increasingly desperate Germans began blasting a message to her on loudspeakers, telling her if she surrendered they would make her a German officer. When that failed, they promised to catch her and tear her into 309 pieces. They had also been keeping track of her score.

Pavlichenko was wounded several times during the war. And in June 1942, she was hit with shrapnel from an exploding mortar shell. By now, she was a huge propaganda hero in the Soviet Union. And her superiors decided that she was worth more to the war effort as a symbol. So, after she was wounded the final time, they pulled her from the front. In less than a year of active fighting, she had killed more any soldiers than any female sniper in history. And in fact, she killed more than most male snipers have as well.

Pavlichenko’s new assignment was to help raise money and support for the war abroad. So, she was sent to America to ask for help against the Nazis. Pavlichenko toured the country giving speeches about her war-time victories and the danger the Soviets faced. The sight of a young girl who had fought so bravely against the Germans was a subtle reminder that the Americans needed to get into the fight against the Nazis. “I am 25 years old,” she told a crowd in New York, “and I have killed 309 fascist invaders by now. Don’t you think, gentlemen, that you have been hiding behind my back for too long?”

To the American press, she was a bit of an odd figure. In America, the idea of women fighting on the front lines still seemed strange. And the questions reporters asked her often left Pavlichenko rolling her eyes. “One reporter even criticized the length of the skirt of my uniform,” she noted, “saying that in America women wear shorter skirts and besides my uniform made me look fat.” But Pavlichenko was still recognized as such a hero that she received an invitation to the White House. There she met the president and struck up a friendship with the first lady.

Pavlichenko raised donations in the West and returned to the Soviet Union. There, she served as a trainer for snipers through the rest of the war. She finally retired at the rank of Major and went home at the war’s end. While Pavlichenko was an excellent soldier, her real dream was always to be a historian. And with the war over, she returned to Kiev and finished her studies. She finally died in 1974 and was buried with the honor befitting a hero. To this day, she remains one of the greatest snipers in history.

Chicago Tribune: This Soldier’s Skill Had Nothing to Do with Gender