In WWII, Two Gay Soldiers' Forbidden Romance Lives On In Their Love Letters 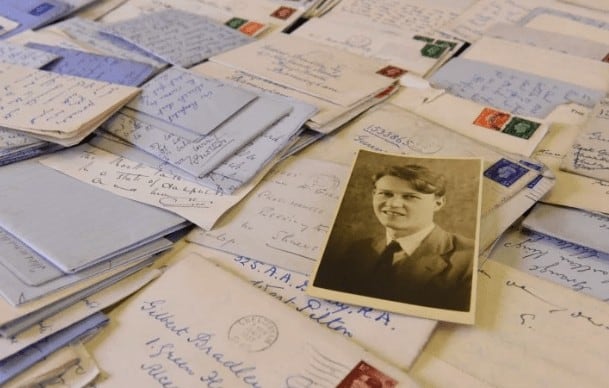 In WWII, Two Gay Soldiers’ Forbidden Romance Lives On In Their Love Letters

Sadly, there was no happy ending for them. At least, not together. For years, they had dreams of leaving England and moving to the United States, where they could live in sunny California, which was known for being more accepting of homosexuals. They went on vacation there after the war, and Gordon Bowsher really did move to California, but he did it alone. He followed in his father’s footsteps by starting a business. He made his own fortune by breeding and training horses.

Gilbert Bradley continued to have relationships with men in the military, and he was eventually caught with a famous politician named Sir Paul Latham in 1941. He was court-martialed from the military for “improper conduct”, but thankfully, he was not imprisoned or killed. He found a job as a studio assistant at the BBC, and eventually retired in Brighton Beach, where he lived to be 92 years old. He kept the letters until he died, in 2008.

No one knows exactly why they broke up, or why they couldn’t go through with living out the dream they shared for so many years. The letters never talk about this- or, if they do, Mark Hignett hasn’t found them yet. Maybe Gilbert Bradley only wanted to remember their best moments- their “golden pitch”.

In one of the letters, it says, “Wouldn’t it be wonderful if all our letters could be published in the future in a more enlightened time. Then all the world could see how in love we are.”

Thankfully, that’s exactly what’s happening. Mark Hignett plans to publish a book with all of the complete letters in chronological order. When the story of their love was first broadcast on the BBC, dozens of movie producers, playwrights, and songwriters approached Mark Hignett, because they were so inspired by the story, that they wanted to create art-based on their love. Someday in the future, there will most likely be a Hollywood film coming out about their story, and people are already anticipating that it will make more people cry than Titanic and Brokeback Mountain combined.

At a local festival called Heritage Open Days, people who were inspired by the love letters got together for a writing workshop. They wrote their own letters in the couple’s honor, and then burned them. The ashes were collected, and they had it made into a diamond ring that symbolizes the love that would last forever.

These Newly Discovered Love Letters Between Two Gay Soldiers In World War II Will Have You In Tears. Katie O’Malley. Elle Magazine. 2017

Gilbert & Gordon: Then All The World Could See How in Love We Are. Heritage Open Days.

Read These Love Letters from A WW2 Soldier to His Boyfriend. Pink News.