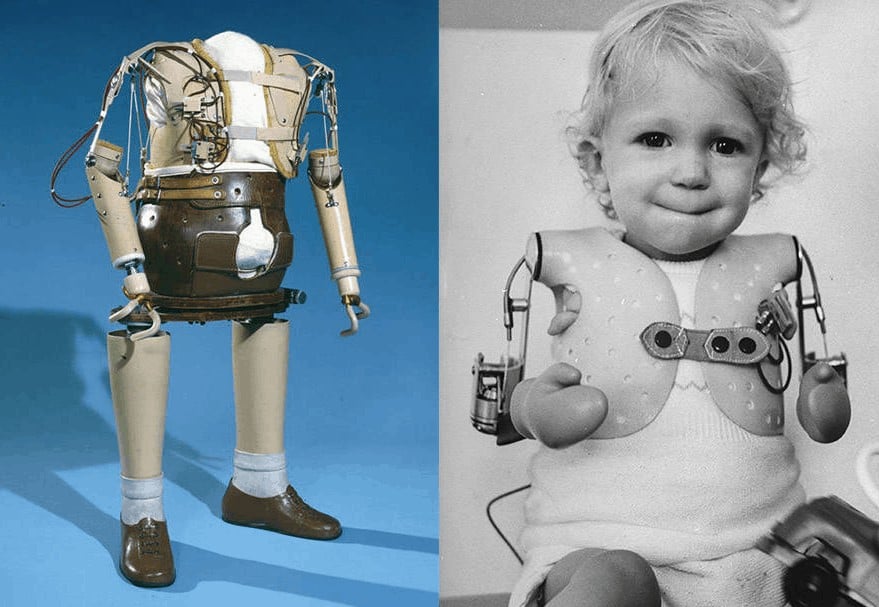 For most parents, the idea that their child being born with a crippling deformity or health condition is terrifying. In the 1950’s and 60’s, parents were forced to live their worst nightmares when a drug called Thalidomide caused the deaths and mutations of thousands of children.

In the past, there were plenty of things that pregnant women did that we know now are totally wrong, like smoking and drinking. However, there was one incident that sticks out in history as being particularly horrifying, because this was a drug that was marketing towards pregnant women. This incident changed the pharmaceutical industry forever, and it served as a warning for the future.

A German company called Chemie Grünenthal brought Thalidomide to the pharmacy counters in 1957. The over-the-counter pill brand was called “Distavel”. Samples of the drug were given out to employees at Grünenthal to take home with them. That same year, an employee’s daughter was born without ears. This was the very first known case of the drug causing a mutation, so they did not know to make the connection.From there, the pill moved on to other countries across Europe, Canada, and even Japan.

At one point, the drug was selling just as well as aspirin, because because everyone swore by its ability to help calm down feelings of anxiety, and it cured insomnia. They realized that it helped pregnant women stop having morning sickness, so they decided to market the drug to pregnant women. Distavel promised that it was safe, and would help expecting mothers get a good night’s sleep, which would in turn help their growing babies. They even went as far as to show an image of a toddler, saying, ‘This child’s life may depend on the safety of Distavel.”

There is no way to tell just how many babies were miscarried due to their mothers taking the drug. This would have happened so early in the fetus’ development, so there is no way of knowing if it was some other health complication, or the drug. Many children were stillborn, because their bodies had developed without all of their vital organs. Over 10,000 babies in Germany were born with missing limbs, organs, or fingers. The true tragedy of the Thalidomide case is that it ruined so many lives beyond just the physical handicaps.

One mother in Belgium named Suzanne Vandeput was so horrified to see how grossly deformed her newborn daughter Corinne was, she knew that the child would never be able to live a normal life. She and the doctor both decided to give the infant a “mercy killing”, by giving her a lethal injection. In 1962, Suzanne Vandeput went to court for murdering her daughter. She was acquitted of all charges. Many parents who were equally as horrified to see their child as Mrs. Vandeput chose to give their children up for adoption, because they could not handle the responsibility of raising someone with special needs.

Others did not give up custody of their kids, but they still put their children in centers where they would have around-the-clock care. The crisis was so serious, that doctors around the world tried to create prosthetic devices to help the victims live more normal lives. When these children grew up, they created organizations in various countries began to pop up to help the victims meet one another and cope with what happened to them- namely The Thalidomide Victims Association and the Thalidomide Society.

The company selling the name-brand drug Distavel applied for FDA approval so that Thalidomide could be sold in the United States. They were producing millions of pills to meet the demand, and planned to ship them worldwide. One woman named Dr. Frances Kelsey was looking over the application. The US Distributor, William S. Merrell, did not do their due diligence with proper testing. Dr. Kelsey was concerned about how the drug may affect a developing fetus. Suddenly, medical studies began to appear that claimed that the drug was safe for consumption during the third trimester. The paper was actually written by the director of William S. Merrell, pretending to be a doctor.

The company was willing to do anything to sell these drugs, even if it meant putting children’s lives at risk. Dr. Kelsey was given a medal for figuring out the dangers of Thalidomide. For years, members of congress were against harsher regulations on the drug industry, most likely because of financial incentives. However, once the Thalidomide scandal was revealed, the opposition shrank away in horror. It was clear that there needed to be much higher standards for pharmaceutical companies to spread their over-the-counter medications.

Unfortunately, the company continued to spread the drug to other parts of the world. When the company was finally brought to court, their defense lawyers tried to blame these deformities on everything under the sun. They accused the mothers of trying to get back-alley abortions. Then, they claimed it was the fault of nuclear fallout. The drug was banned across the world, and Grunenthal was found guilty. It was not until 2012 that Grunenthal actually apologized to the public for making Thalidomide. This was fifty years after the incidents. But as you will see, taking responsibility was too little too late.

By 2011, the BBC reported that there were fewer than 3,000 victims left alive in the United Kingdom. Many of the victims died early deaths, due to health complications. They are receiving payouts of $63,000 per year. For some, this is enough to take care of their needs. But for others, the cost of their specialized healthcare goes beyond what they are receiving from the lawsuit settlements. The victims in Germany were not even as lucky. They only receive $15,154 per year, which is hardly enough to survive, let alone pay for their care. There has been a push for additional lawsuits to get even more money out of Grunenthal, based on the possibility that they may have knowingly hired a scientist who once experimented on humans in a Nazi prison camp.

Thalidomide is Back, and History Repeats Itself

There were plenty of doctors who still stood by its magical ability to sedate people in times of extreme pain. After all, it became a best-selling drug for good reason. In 1964, a man in Jerusalem named Dr. Jacob Sheskin was helping patients with leprosy. They could not sleep, because their pain was so overwhelming. He had some Thalidomide, which he had saved for the two years after the ban. After all, when men take the drug, there is really no negative side-effect, since they are not the ones bearing children. Leprosy patients also have very little left to lose, since the disease is incredibly deadly.

Once Dr. Sheskin gave the Thalidomide to the leprosy patients, they were able to have a good night’s sleep for the first time in years. The human body does most of its healing while we sleep, so it is vital for any sick person to rest. However, there was an even better result than Sheskin ever anticipated. Miraculously, their leprosy began to improve, and their skin finally began to heal. Years later, scientific research discovered what Thalidomide is really doing to the human body. It cuts off blood flow to the body’s cells, so it stopped the leprosy from growing on the skin. There was also reason to believe that it may help cut off blood flow to cancerous tumors.

Obviously, cutting off blood flow is harmful for a body that is growing a baby. Grown men who take the pill and have restricted blood flow in their body are obviously not going to suffer the same negative consequences as a pregnant woman. Surprisingly, even though the drug had ruined their lives, the victims of the Thalidomide Society decided that if it could help people, there was no reason for them to say “no” to the drug returning to society. The courts decided that Thalidomide should come back as a means to treat certain conditions.

But not every country is under strict surveillance as the United States. According to the BBC, there are over 30,000 new cases of people catching leprosy in Brazil every single year. Desperate for a cure, people quickly agreed to taking this “miracle drug”, Thalidomide. Even though Thalidomide was a huge news story in the English-speaking world in the 1950’s and 60’s, people in South American had no idea that this drug had a history of serious birth defects. 100 new cases of children born with deformities because of their mothers taking the drug have appeared since 2005. Now, a new generation of families must live with the struggles of being born with special needs. The Brazilian government forced drug distributors to print photos of deformed babies on the front of the boxes of Thalidomide.

The Shadow of the Thalidomide Tragedy. New York Times. 2013.

Mercy Gets The Verdict. 1962. British Pathe.