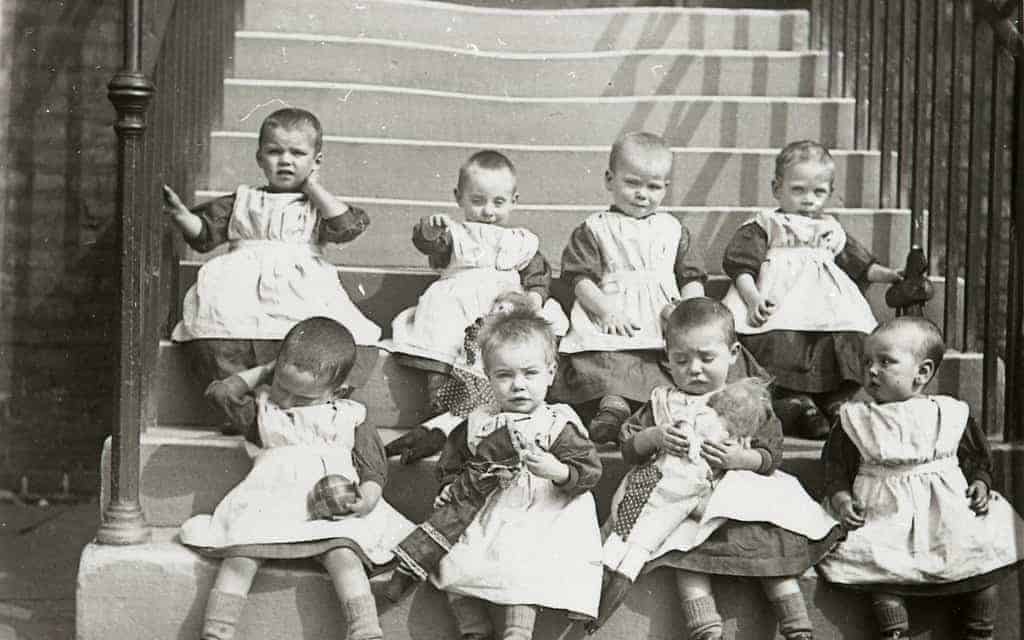 The Bon Secours Mother and Baby Home was established in Tuam, Ireland to help young, unmarried women and their children. It was supposed to be a place where women and children could be safe. It was supposed to be a place where they could start to rebuild their lives. Instead, it was a place where many of those lives ended. The Home was run more like a prison than a place of safety. And children were often separated from their mothers and given up for adoption without the mother’s knowledge. But the ground beneath the home held even darker secrets.

In 1975, two 12-year-old boys playing on the grounds where the Bon Secours Home once stood made a shocking discovery. After lifting up a concrete slab, they found a dark hole that seemed to lead to an underground chamber. Inside, they found a child’s skeleton. Then they found another. In fact, the chamber was full of them. The two then told their family, who consulted the local priest. The priest decided it would be best to say a short prayer over the bodies, and then rebury them. For the next 40 years, the burial site was almost completely forgotten.

In 2012, a local historian was researching the history of the Bon Secours home. In her research, she discovered that almost 800 children had died at the home. But when she looked for their names in the local grave records, she found that only two had received a proper burial. Where had the rest of the bodies gone? It was then that she remembered the bones found on the site in 1975. Based on the historical records, the historian realized that the burial site had once been a septic tank. The missing bodies had been buried inside.

And as researchers began to look more closely at what life at Bon Secours was really like, they found out why so many children had died there. The building itself that the Home operated in was originally a workhouse. A workhouse was a place where the poor and homeless worked long hours in often dangerous conditions in exchange for a place to sleep and a bit of food. And like many workhouses, the one at Tuam was designed to be an unpleasant place. This was supposed to keep people who could find work outside the workhouses from coming there. And it would be difficult in a lot of ways to tell the difference between the workhouse at Tuam and a prison.

Those bleak conditions carried over into the building’s new life after the workhouse closed. In 1925, a group of nuns called the Bon Secours Sisters took over the building. In Ireland at the time, being an unwed mother was seen as extremely shameful. Girls who became pregnant outside of marriage were often kicked out of their homes. And the law made it difficult for an unwed mother to get any support from the child’s father. The Bon Secours home was designed to be a place where these women could give birth safely. But in reality, the home was anything but safe.

The nuns who worked at the home were trained in helping women give birth. And women who gave birth there weren’t charged up front for the cost of their help. But once a woman had given birth at the home, she was expected to pay with work. The standard time was one year of work in exchange for the treatment they received and their room and board. This meant that once a woman went into the home and gave birth, she wasn’t allowed to leave until she had worked off the cost.

In the meantime, mothers were separated from their children. The children themselves were kept in another area of the home, where they were raised by the nuns. Then, usually without telling the mother, the Home began trying to arrange adoptions for the children. The assumption was that young, unwed women could never provide for their children, and so it was better if they were placed with a foster family as soon as possible. Once a child was adopted, the Home refused to tell the mothers where they had gone. It wasn’t unusual for a woman to leave the Home to look for work and return to find their child had vanished.

Many of the children were adopted by families in Ireland. But many others were sent or even sold to couples in other countries like America, Canada, and Australia. In some cases, the children found themselves in loving homes. But children were also placed with families who exploited or abused them. If a child lived at the Home long enough without being adopted, they would eventually be sent to Industrial Boarding Schools. There, they would have to work long hours and were often sexually or physically abused. That’s assuming of course, that they survived.

The poor conditions in the Bon Secours home meant that young children died frequently. Usually, they fell victim to conditions like tuberculosis, cholera, or malnutrition. Hunger was constant for the children at the Home. And this also made them more vulnerable to infectious diseases. As a result, the death rate was enormous, particularly during the years of WWII. At the time, much of the country was struggling with a lack of food caused by the war. And that hardship hit the Bon Secours Home as well, making bad conditions worse. Over 25% of children at the home died every year between 1943 and 1946.

The bodies of these children were then quietly buried in mass graves on the property with no record of what happened to them. The Home relied on funding from the government. And if they had to answer for why so many children were dying, they might be shut down. Meanwhile, if the mothers of the surviving children wanted to get them out of the Home, they basically had to escape. And if they were caught by the police, they would be returned. For women who returned to the home, especially if they had become pregnant again, there was an even worse fate in store.

The Bon Secours home worked closely with something called “Magdalene Laundries.” These were places were, like Bon Secours, supposed to help women. But in reality, they were prisons where women were forced to work cleaning laundry. The name gives an idea of how the places were viewed. Named after the famous repentant prostitute from the Bible, Mary Magdalene, they were a place to put “fallen women.” A woman who had come to Bon Secours pregnant but unwed was seen as a sinner. And if the woman left and returned pregnant a second time, she would be placed in a Magdalene Laundry to pay for sinning again.

So, these Magdalene Laundries were basically run like religious institutions. They were a place where “sinful women” were trained to be good Christians. Women were required to remain silent for most of the day. And they were required to refer to the nuns as “mother” no matter how old the woman was. If they had children when they came, they would probably never see them again. Their days were split into long hours of work and prayers. And the women were often punished for breaking any of the rules in the laundries.

Both the Bon Secours Home and the Magdalene Laundries were part of something called “Magdalene asylums.” They were designed to prevent desperate women from turning to prostitution. But women were often confined to the asylums by their families for being “too flirtatious,” or even for being the victims of sexual assault. It was seen as better for their souls that they were locked away than that they be forced to live “sinful” lives. Once inside the Magdalene asylums, the women were largely forgotten by society.

They were seen as social outcasts, sinners, or prostitutes. And that meant that no one spent much time worrying about how they, or their children, were treated. This made them easy targets for abuse. Many were raped or sexually assaulted. Others were physically abused. And the poor conditions, violence, and malnutrition meant that many women died. Their bodies were usually dumped unmarked into mass graves. The only way to escape from an asylum alive was to have a relative convince the authorities that they could keep you from sin. That meant that women without relatives were sometimes held there for life.

For women who got out, there was a life-long sense of shame at being forced into the asylums. Other people assumed that they had been placed there for being prostitutes. And in conservative and religious Ireland, that meant they would have a hard time finding work or getting married. Ironically, this probably pushed many of the survivors into prostitution to survive. As society changed, the asylums began to be shut down. But the last asylum didn’t close until 1996. Still, the country wasn’t ready to look at this dark chapter of its past. It wasn’t until the mass graves began to turn up in the 21st century that the Government issued an official apology to the women who were held in the asylums. But for many, it was too little too late.

The Washington Post: The â€˜mother and baby home’ at Tuam, Ireland, where friends just â€˜disappeared, one after the other.’

The Guardian: Mass grave of babies and children found at Tuam care home in Ireland