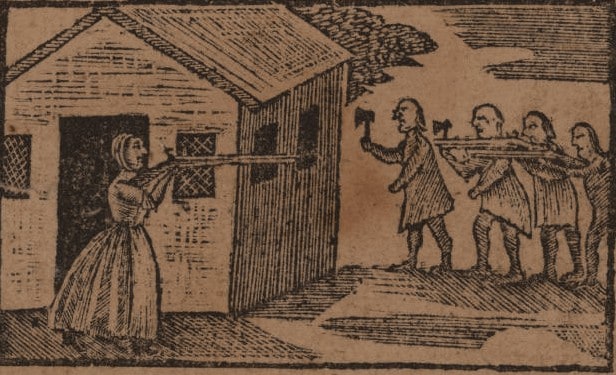 In 1675, scarcely 50 years after the first English settlers established themselves in New England, a war broke out between them and the local Native American tribes over land and supremacy. In February 1676, the wife of the minister of Lancaster, Mary Rowlandson, found herself directly caught up in the war when Algonquian tribesmen raided her town. Rowlandson was one of 24 women and children were taken captive by the Indians. She would spend eleven weeks as their captive, walking 150 miles across the New England Wilderness while losing her children: one to death and the other two to enforced separation.

Rowlandson was eventually ransomed and reunited with her surviving children. In 1682, she published an account of her ordeal: “A Narrative of the Captivity and Restoration of Mrs. Mary Rowlandson.” The book was a hit on both sides of the Atlantic, reprinted three times in New England and once in London in its first year alone. Readers reveled in the story of the upright puritan woman who survived amongst heathen savages. Rowlandson, however, had carefully shaped her account to preserve her reputation while ensuring that the Native American tribes came across as unsympathetically as possible. The resulting omissions and glossing over of facts tainted the image of Native Americans for years to come.

In 1620, the first English settlers landed on Plymouth Rock in Massachusetts. Unprepared for life in the new colony, the colonists would likely have died if not for the help given to them by the local Native American tribes, led by the Pokanoket chief, Massasoit. However, by the 1670s relations between the settlers and the tribes were not so cordial. As the number of colonists increased, so too did the demand for resources. The settlers began to encroach upon tribal hunting and fishing grounds and attempted to force the tribes to recognize English sovereignty.

Some tribes such as the Mohegan, Pequot, Massachusetts and Nauset Indians remained staunch allies of the settlers. However, cracks began to show amongst relations with other tribes. In November 1675, those cracks finally became a chasm. Indian raiding parties had started to attack military strongholds across New England. Although the Narragansett nation as a whole was not involved in the rebellions, some individual tribesmen did take part. So, the Colonial Militia of Massachusetts, Plymouth and Connecticut declared that the Narragansett people had broken the peace. In winter 1675, a colonial army set off to attack the main Narragansett stronghold. On December 19, they wiped it out.

In response, Pokanoket, Wampanoags, Nipmuck, Pocumtuck and Narragansett tribes allied with the settlers. The colonists knew the Indian’s leader as â€˜King Philip,’ after the English name bestowed upon him. However, Philip’s real name was Metacom. He was the sachem or principal chief of the Pokanoket and ironically, the son of Massasoit. Philip was joined in his leadership by his sister in law, Weetamoo, a powerful squaw sachem in her own right. Mary Rowlandson was to encounter both Pokunoket leaders during her captivity. In fact, Weetamoo would own her.

On February 10, 1676, Metacom’s forces raided the town of Lancaster, Massachusetts. The minister of the town, John Rowlandson, was away in Boston but his wife Mary and their three children were in residence as were many of their family and friends. Metacom’s forces brutally killed all but 24 of the inhabitants. The attackers wounded Mary, and her youngest daughter Sarah and the little girl died a week later. Mary’s other two children were then taken from their mother. Rowlandson did not fully reunite with them until her release, eleven weeks later in May 1676, after her husband paid a Â£20 ransom. That same month, King Philip’s War ended.

The Colonist army had finally destroyed Metacom’s war camp, splitting the tribal alliance. The damage caused by the conflict was devastating. 30% of the English population of New England – some 2500 settlers- had been killed. However, the colonial forces killed 5000 Native Americans. Nor did the Indian’s suffering end there. Indians loyal to the English hunted down Metacom, shooting him through the heart and beheaded him. Some of his supporters escaped to Canada. However, those who surrendered were sold into slavery in the West Indies. Animosity between the settlers and Native American’s was to simmer for years. Rowlandson’s account of her captivity did nothing to alleviate that situation.

Rowlandson’s account of the Native Americans portrays them as heathen savages or “wild beasts of the forest.” Her narrative conjures images of untamed beasts, “roaring, and singing and dancing, and yelling,” whose unchecked, undisciplined nature is the antithesis of all things Christian and decent. Rowlandson also uses various phrases and allusions to link the Native Americans with the Christian concept of evil. In her eyes, the Indians are “hell hounds” and “black creatures in the night,” who made the wilderness she was forced to travel “a lively resemblance of hell.”

Rowlandson’s interpretation of the Indians as savage and frightening is justifiable in some respects. After all, the events leading up to her capture were terrifying, and Rowlandson lost not only neighbors but also her sister. When describing the attack, Rowlandson depicts a scene from hell. While the town burned, the attackers “shot” some of the settlers while the enemy stabbed others with spears or ” knocked down with their hatchets.” One man was left not quite dead after being “chopped into the head with a hatchet.” While still alive, he was “stripped naked, even as he was “crawling up and down” the ground.

Rowlandson’s experiences are not the only thing that color her narrative; the prejudices of her own Christian culture also play their part. For although in the seventeenth century, skin color did not define cultural superiority, how society organized itself and the religion it adhered to played a significant role in determining whether it was civilized or barbaric. Even before King Philip’s war, the Puritan Christian settlers were judging the Native Americans against their own ridged cultural benchmark and finding them wanting. So, no matter how helpful or resourceful the Native Americans were, they would always be â€˜heathen’ – and so less than â€˜god’s chosen people.’

For this reason, Rowlandson simply could not acknowledge any kindness, however, small shown to her by her captors. In her memoir, she showed no gratitude to the warrior who put her and her dying daughter, on horseback when he realized Rowlandson could no longer carry the child. Instead, Rowlandson chose to concentrate on the laughter of her other captors when she fell off the horse. Nor did Rowlandson acknowledge the empathy some of the Native Americans showed after Sarh’s death when they helped to bury the little girl. Instead, she universally derided them as â€˜pagans‘ and “merciless enemies.

This attitude becomes more marked during Rowlandson’s time as a slave in the Indian camps. Despite some harshness, many of the Native Americans showed her kindness and respect for her work. One warrior, on his return from the Medfield Fight’ gifted Rowlandson a Bible he had plundered. Rowlandson’s response is to complain of her distress because she had “No Christian near me.” It is as if her captors are not quite human. Certainly, Rowlandson does feel able to empathize with them as fellow humans. When Weetamoo’s baby died, Rowlandson’s could only note: “there was one benefit in it-that there was more room.” Weetamoo then gathered “a company to mourn and howl with her. ” I could not much condole with them,” Rowlandson confessed.

Rowlandson’s narrative was not just motivated by cultural prejudice. It was also carefully crafted to preserve and bolster her reputation as an upright Puritan woman. In order to maintain and increase her standing in Puritan society, it was essential Rowlandson demonstrating how she had remained true to the expectations of her culture even in the most testing circumstances. One of the significant ways Rowlandson achieved this was by emphasizing her continued faith in God even in the most testing circumstances of her captivity.

Rowlandson portrays her captivity as a trial set by God- and one that she passed. Her endurance is in contrast to a young woman called Joslin who is killed by her captors when she becomes hysterical. Rowlandson implies this loss of control equates to a loss of faith. Rowlandson, on the other hand, clings to her belief and so prevails, whatever the challenges. She carefully describes two occasions when she risked physical harm for her religion, once by refusing to work on the Sabbath and another by openly reading her Bible. These occasions allow Rowlandson to depict herself as the epitome of a godly woman.

Rowlandson also had to make it clear she had not transgressed her culture’s social norms in other ways- mainly regarding proper behavior. To survive, amongst the Indians, Rowlandson had to make clothes to trade for extra food. However, the ideal Puritan wife did not dabble in commerce. So, Rowlandson glosses over the trade aspect, by making her clothes making appear to be a casual obligation to her captors- and any rewards purely incidental.

Finally, there was the question of her virtue, for Rowlandson spent eleven weeks away from her husband in the company of â€˜savages.’ Rowlandson quickly disabused any readers of the idea that her honor may have been compromised that assuring them that her otherwise unprincipled captors had never treated her dishonorably. This statement- whether it was true or not- was made entirely for the sake of Rowlandson’s reputation. For in Puritan society, even forced sex would have destroyed her social standing.

Equally curious is the way Rowlandson downplays the role of Native American women, making their position conform to the norms of European society. Rowlandson’s mistress, Weetamoo is a case in point. Weetamoo was a military and political leader in her own right. However, Rowlandson defines her social standing by her husband and brother in law, Metacom. The Squaw Sachem is depicted as a spoiled European gentlewoman, preening over her face paint and beads and ill-treating her servants (Rowlandson) rather than as an important woman in her own right. It is almost as if Rowlandson- or her male editors- were afraid that such a â€˜heathen’ concept as equality could challenge the status quo of their own culture.

Where do we get our stuff? Here are our Sources:

“Summary of ‘a Narrative of the Captivity and Restoration of Mrs. Mary Rowlandson’ – the Role of Women in Her Removes”, Jade Gracie. May 27, 2019.