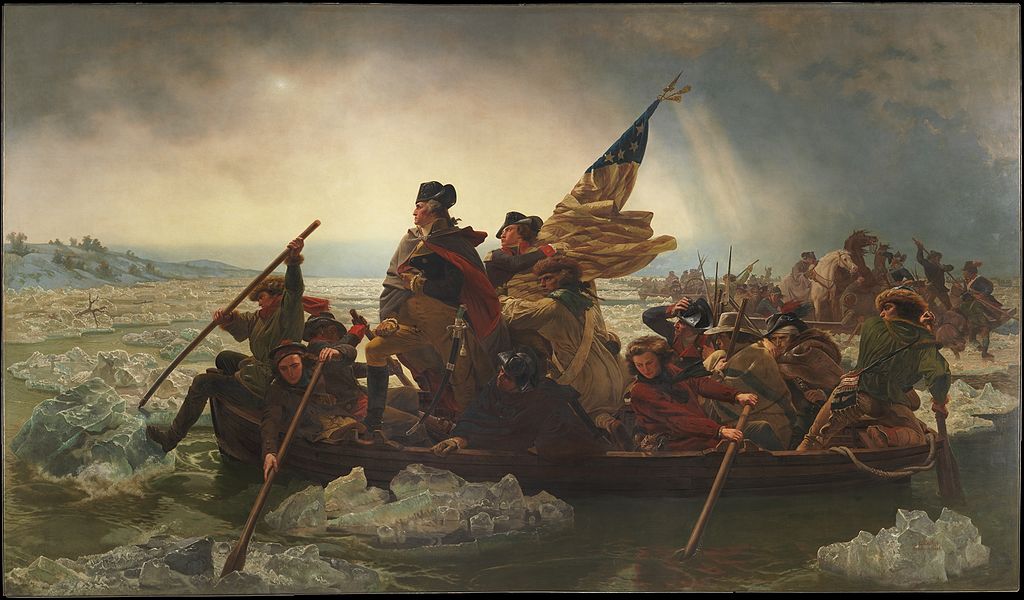 16. Washington wanted to make one more attack during the campaign

In Trenton, Cornwallis easily heard the sound of the guns and was soon on the road to Princeton hoping to yet catch Washington. The latter knew he had to evacuate Princeton, and he wanted to continue the campaign by capturing the garrison at New Brunswick. But he found little support for the idea among his senior officers. They argued the troops were exhausted, having fought on two consecutive days, with no sleep, and a forced march throughout another frigid night. Washington gave in to their counsel, and the Continental army gathered their prisoners and captured supplies and departed Princeton, bound for Somerset Court House. They rested there for one day, and on January 5 moved to Pluckemin, New Jersey. The following day they arrived at Morristown, New Jersey where they established their winter encampment, the first of several winters spent at Morristown over the course of the war.

Cornwallis arrived in Princeton late on January 3. There he received orders from Sir William Howe to abandon most of the New Jersey garrisons and consolidate his forces at New Brunswick and Perth Amboy. Though Howe wrote to London that the battles in New Jersey had been minor affairs, he nonetheless abandoned all of central New Jersey to the Continental Army as a result of them. In Morristown the encampment proved consequential. Washington had the remnants of his army inoculated for smallpox. Local residents were told to take an oath proclaiming their loyalty to the Continental Congress or have their property confiscated. New enlistments were changed to three years, marking the beginnings of a professional army in America. Washington established travel restrictions by civilians, a step to inhibit Loyalist spies. And both sides continued to skirmish throughout the winter, in what became known as the Forage War.

17. The Forage War made for a violent winter in New Jersey

When the Continental Army retreated across northern New Jersey in 1776, they seized as much of the local produce as they could, especially fodder for horses and oxen. British troops stationed there after the withdrawal of the garrisons were to send forage parties far from the safety of their encampments in search of food for humans and livestock. In early January Washington issued orders for his troops and local militia to forage liberally, and to harass the enemy’s foraging parties to the maximum extent possible. For protection, the British had to send out larger and larger foraging convoys, protected by ever-growing formations of British troops. Several engagements larger than Trenton, in terms of the numbers of casualties, occurred across central and northern New Jersey during the Forage War. The British suffered more casualties during the campaign than they had during the New York campaign of the preceding summer.

Some New Jersey militia used forage trains as bait to entrap British units when they were attacked by larger militia and Continental Regulars, a tactic the British adopted as well. Washington’s standing order to attack kept the winter encampments on edge well into April. It also forced Howe to reevaluate the British position in North America. John Burgoyne had arrived in Canada with a plan endorsed by the British Minister of War for the campaigning season in 1777. Burgoyne planned to march down through Canada and upstate New York. Howe was to send his main force to join him in Albany. The plan was to split the colonies, isolating New York and New England from the center and southern colonies. The presence of Washington’s army and the harassing tactics of the winter caused Howe to consider an alternative plan.

18. The ongoing fighting in New Jersey altered British plans for 1777

Had Washington not crossed the Delaware in December, 1776, he likely would have wintered in Pennsylvania, though most of his army would have vanished. After his lightning New Jersey campaign the presence of the Continental Army in detachments around Morristown bolstered the New Jersey militia. Units of the Continental Army frequently operated in support of the militia throughout the winter. By late winter, the aroused militia and presence of the main American army led Howe to change his plans for the upcoming campaign. He had received approval to attack Philadelphia that summer, but Washington’s presence and militia activity made an overland march across New Jersey, by then nearly empty of fodder for horses and draft animals, a dangerous proposition. Howe decided to move his army to strike at Philadelphia by sea, leaving behind a garrison in New York and New Jersey to defend the British positions there.

He did not have sufficient troops to support the thrust by Burgoyne down from Canada toward Albany. Washington moved to counter Howe’s attacks in Pennsylvania but failed to prevent the capture of Philadelphia. But the failure to support Burgoyne to the north in 1777 led to the destruction of the British Army there, which surrendered to the Americans on October 17. The impact of Washington’s New Jersey campaign continued to resonate through the rest of the war. In 1778 the British evacuated Philadelphia and marched overland across war-torn New Jersey, with Washington’s army at their heels. They fought the largest pitched battle of the war at Monmouth Court House before the British retreated into their fortifications in New York, and the outposts at New Brunswick and Perth Amboy. Vicious partisan fighting continued in New Jersey for the rest of the war.

By striking at the British in New Jersey, Washington demonstrated to the French the Continental Army was far from defeated in early 1777. This in turn led to increased covert support from French operatives, who purchased arms stored in French arsenals and shipped them to America via the free port of Eustatius. French support throughout 1777 increased, including guns, flints, gunpowder, clothing, medical supplies, and other vital material. Through Benjamin Franklin and other American agents, lobbying for the French to support the Revolution openly increased. The French had experienced military campaigns in North America, and were well aware of the difficulties the British and their German mercenaries would face in subduing Washington’s army.

The increased aid strengthened both Washington’s main army and the Northern Army which fought the Saratoga Campaign in 1777. Had Washington’s army withered away in December 1776, the aid would not have been forthcoming. Many of the troops who served in both American armies carried French muskets, wore French-made uniforms and shoes, and were supported by French cannons. The British Minister to France reported the steadily increasing hostility directed toward the British, even in those days of punctilious courtesy and flamboyant manners. The New Jersey campaign opened the door for the eventual French military intervention in North America, as well as in the West Indies, India, and Africa, making the American Revolution an early World War.

20. There is little doubt Washington saved the American cause in 1776-77

As Washington’s army retreated before the British in October, 1776; as men deserted and enlistments began to run out, he contemplated retreating into the mountains and conducting a guerrilla war. That’s how desperate the situation was for the Patriots in the months following independence. In just a few months he had lost most of his army, several battles, America’s largest city, his second-in-command, and much of his reputation. But he hadn’t lost his faith in himself, nor in the men he led. His actions of December 1776 and January 1777 were bold, daring, and possibly even reckless. Had he failed the Continental Army would have been destroyed. But he didn’t fail. He succeeded at a time when success was the only option for the cause, no matter how remote the possibility for success may have been.

In recent years it has become fashionable to disparage George Washington. His generalship, his leadership, and his character have all been questioned, largely due to his ownership of enslaved people. In late 1776 his character was such that he would not succumb to impossible odds. He was enough of a leader to get defeated, demoralized men to follow him against imposing physical barriers and the guns of a numerically superior enemy, in bitterly cold and snowy weather. He brought the best out of hungry, poorly clothed, long-suffering men. And he was general enough to see and seize an opportunity no one else could see. In doing so, he and the men he led, under the password “Victory or Death” saved the American Revolution.