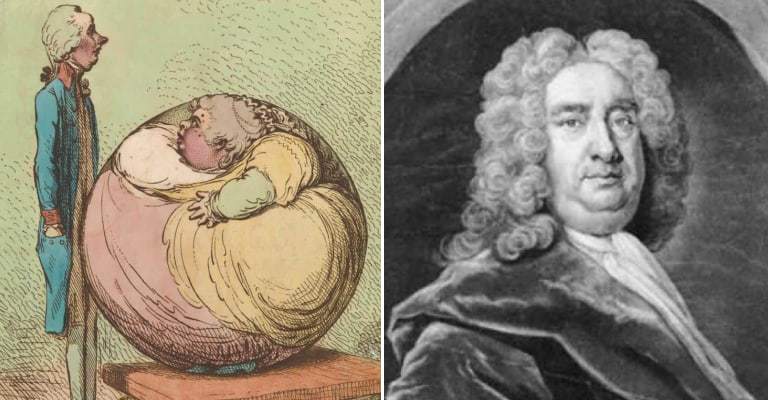 Dieting and weight loss seem like a very modern phenomenon. Since the twentieth century, our obsession with our weight and shape has continued to grow, spawning a whole range of diets designed to give us the perfect figure. The Cabbage Soup Diet, the Atkins Diet, Intermittent Fasting and Paleolithic style eating are just a few of the diet fads touted to help people lose weight fast. But despite appearances, dieting is not such a modern trend. For the first recorded diet occurred three hundred years ago in Georgian England.

The rise of the British Empire and the Industrial Revolution were two events that marked the Georgian period. They were events that substantially increased the wealth of the governing elite. As a result, Society became ever more decadent, and one of the symptoms of this was overindulgence in rich food and drink. The upper classes found themselves becoming increasingly obese and unhealthy. So, in the 1720’s Scottish doctor George Cheyne devised a diet to help combat the worst of these excesses. Cheyne’s diet advocated food restriction and exercise. It sounded surprisingly modern in design. But did it reduce the waistlines of Georgian Britain?

The Excesses of the Georgian Upper Classes

The Georgian Period was a time of revolutionary change. During the period between 1714 until 1837, Britain’s Empire began to grow and spread. The loss of the American colonies was compensated by the discovery of Australia by Captain Cook and Clive of India’s securing British dominance over of vast swathes of lucrative south Asia. Also, from 1770, Britain became the world’s first industrial nation. Rural life became more mechanized, and the growth of urban manufacturing began. While these changes brought mixed advantages to the general populace, for the landed gentry and commercial elite, it was a boom time.

With little to do except let their agents handle their affairs, the Georgian upper classes concentrated on enjoying their wealth. Conspicuous consumption rocketed. The elite built new country houses in the popular neo-classical style and indulged themselves with innovative furniture designs from the likes of Thomas Chippendale. They began to drink their tea from the fine china of Wedgewood and dress in silks and jewels from the east. And then there was the food and drink that was now available to them. For Georgian food rich, exotic and lethally calorific- for the upper classes at least.

Trade had made tea and coffee readily available, as well as spices, wines, and exotic foodstuffs – for those who could afford it. Meal times changed to suit the new, leisured lifestyles of the wealth and newly emerging middle classes. Breakfast became a late meal, taken at 10 am, replete with tea, coffee, and hot chocolate, hot and cold rolls, butter and pastries. Luncheon may have been light but dinner more than made up for it, with several courses rich in meats, and puddings made of butter, cream, eggs- and sugar from the sugar plantations of the Caribbean. Then, to round off the day, there was supper, which consisted of yet more pies and savories. And all of this was washed down with large quantities of wines and liqueurs.

The waistlines of the upper classes began to expand to match their bank balances. Their deep pockets allowed for them to be fat of fetlock and red of cheek was a sign that you had made it because you could afford to sit back and enjoy the good life. However, it quickly became apparent that there were disadvantages to all this excess. Diseases like gout increased and heart attacks and strokes began to grow more prevalent. Quite suddenly, it became apparent that the class that regarded themselves as the helmsmen of the nation was at risk.

“Since our wealth has increased and our navigation had been extended, we have ransacked all parts of the globe to bring together its whole stock of materials for riot, luxury and to provoke excess,” noted one Scottish gentleman, “the tables of the rich and great (and those who can afford it) are furnished with provisions of delicacy, number and plenty, sufficient to provoke and even gorge the most large and voluptuous appetite.” That gentleman had noted the effects of this ‘excess’ on his own body and had taken measures to curb it. His name was George Cheyne.

Like many of his class, George Cheyne was grossly overweight. The Scottish doctor had swapped his native Aberdeenshire to establish a practice in fashion London. As was common at the time, Cheyne often visited his patients in the popular taverns of the town. Being a cheerful and witty man, he was well liked by his clients and so often joined them for food and drink- both inside and outside of working hours. Cheyne became, in his own words, the friend of “bottle companions, the younger gentry, and free-livers, ” because, like them, he enjoyed to “eat lustily and swallow down much liquor.”

However, this lifestyle caught up with him. By 1705 at the age of just 34, Cheyne’s health was in trouble. His rich diet of food and booze had caused him to balloon to 400 pounds in weight. Cheyne was depressed, short of breath and lethargic. He also nearly died from what he referred to as “vertiginous paroxysms” otherwise known as a heart attack or stroke. Cheyne realized he had to take himself in hand. Initially, he tried to lose weight with vomiting purges with little good effect. Then in 1707, he had a stroke of luck.

Cheyne made the acquaintance of a certain Dr. Taylor in Croydon. Dr. Taylor was the advocate of a most unusual way of life. He drank no alcohol and claimed to have lived on only milk for seventeen years. Taylor’s state of rude health impressed Cheyne, so he decided to follow a similar diet- with some adaptations. Although he gave up alcohol, Cheyne supplemented his milk-based diet with vegetables. The result was dramatic. Cheyne began to lose weight- and to feel much better. However, after a return to his bad old ways caused his health to decline, Cheyne realized his lifestyle change needed to be a permanent one.

In the 1720’s Cheyne moved his family and practice to the fashionable spa town of Bath. There his diet began to attract an array of fashionable- and influential clients. Cheyne advised aristocrats how to lose weight as well as the poet Alexander Pope, Samuel Richardson and the founder of Methodism, John Wesley. Cheyne’s premise was simple: no meat and limited alcohol and restful sleep between 10 pm and 6 am. Exercise and fresh air were also essential. For those in the towns who could not walk and ride, he recommended the use of a ‘Chamber Horse’ an indoor exercise machine that replicated riding by bouncing the patient up and down.

The upper classes flocked to Cheyne. However, other doctors were less than flattering. One doctor began to refer to Cheyne disparagingly as “Dr. Diet.’ However, this was quite true; for Cheyne had become the first diet doctor. His books and essays and his practice made him a wealthy man. Meanwhile, Cheyne’s methods encouraged the spread of vegetarianism amongst the literary classes. While amongst the rest of upper-class society, the concept of dieting took off. Fashionable newspapers now featured adverts for weight loss tonics and pills. Once uncontrollable eating had been the way to advertise your success. By the late eighteenth century, dieting was an equally popular method.

From Excess to Austerity

Cheyne’s books remained popular for another 50 years, and it is tempting to see his method as laying the foundations for the more controlled attitude to diet and life that came to be epitomized by the Victorians. By the Victorian period, doctors had acquired a better understanding of the workings of the body and the effect of diet upon it. Medical practitioners such as Thomas Kings Chambers began to build upon Cheyne’s methods, advocating much plainer meals. Chamber’s breakfasts were simple affairs, and dinner was recommended to be a wholesome but limited meal, with a typical menu consisting of boiled macaroni and lean meat.

Indeed, Britain could not afford to jeopardize her burgeoning empire because those running it were too fat and sick to cope. However, the need to curb obesity was motivated by more than a need to improve the health of the upper classes. For the political survival of that class was at stake. The French Revolution had shown Europe that the lower classes would no longer tolerate oppression and hardship while their decadent rulers flaunted their privilege. As the French Monarchy fell, Britain and the other European powers looked on in concern.

The late Georgian period was marked by war in Europe- and social unrest at home. Movements such as the Luddites protested against the hardship increased mechanization was causing the working classes while the unemployment and poverty brought about by the Napoleonic wars resulted caused an increase in radicalism and workers protests. These movements were seen as possible precursors of revolution and harshly suppressed. However, the establishment knew that force could only achieve so much.

It became essential for the ruling elite to cultivate a more responsible, moderate image that showed their worthiness to run Britain. The political class began by distancing itself from the still extravagant British monarchy, headed by the now profoundly unpopular King George IV, the former Prince Regent. George had once been a fashionable rake. Now he was an obese joke. His size and his love of extravagant French and Persian food were used to portray him as decadent and at worse, unpatriotic. British food, epitomized by roast beef, was now seen to be hearty, sustaining and unfussy. Those who overindulged themselves to the point of obesity were no longer seen as successful but unfit to rule.

By amending their diet and lifestyles, the Victorian ruling classes were not solely trying to maintain their health and wellbeing. Instead, they were primarily concerned with maintaining the status quo. Victorian upper-class society became more austere to prove their worthiness to control Britain’s destiny. Whereas in the Georgian period, the ruling classes indulged themselves with leisure and excess, their Victorian counterparts cultivated an image of industriousness and self-control. In this way, they served as an example of the benefits of hard work and a modest lifestyle to the lower classes. Being able to control their excesses even when wealth and privileged could tempt them to indulge themselves proved they deserved to be at the helm of British society.

Revealed: how the Georgians taught us to Diet 300 years ago, History Extra