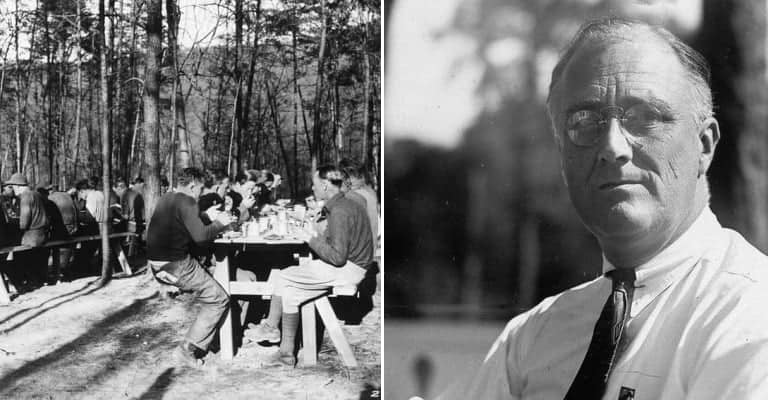 19. The CCC was never officially closed by Congress

Officially the Civilian Conservation Corps was never terminated by legislative or executive order. Congress merely ceased to fund it in 1942. The equipment it operated was transferred to other agencies, both federal and state. Its forest fire fighting capability and equipment was absorbed by several federal and state agencies responsible for the maintenance and protection of public lands, and many of the techniques developed by the CCC are still used in combating forest fires. Many state agencies employ young men and women in a manner similar to that adopted by the CCC, providing food, housing, and work training for those who enroll in their programs.

There are over 100 programs across the United States in the 21st century which operate along the lines of the CCC model, spread across 41 states. Some are federal programs, some are state programs, and some are both, with state operated programs receiving federal funds. The Departments of the Interior, Labor, Agriculture, and Education are some of the federal level departments which support CCC model agencies across the country. Several philanthropic organizations, including the Ford Foundation and the Mott Foundations, provided funding to create new corps organizations, and continue to support them with funding. The AmeriCorps program supports many of these organizations.

20. The legacy of the Civilian Conservation Corps

One must but open one’s eyes in one of America’ National Parks, most of its state parks, and in many of its community parks, to observe the legacy of the CCC. During its existence, the men of which it was comprised planted over 3 billion trees, in parks, along roadways, and lining city streets. One of the largest urban parks in the United States, Cincinnati’s Mount Airy Forest, was built almost entirely by the CCC; until the early 21st century the former CCC camp served as a homeless men’s rehabilitation center. Many of the former CCC camps still stand, at least partially, restored as museums or recreational facilities.

Some camps, such as Rabideau Camp in Minnesota’s Chippewa National Forest, continue to serve the public as education centers. The Camp for the CCC members who built New Hampshire’s Bear Brook State Park now serves as the administration facility for the park, and provides a museum describing the park and its construction to the public. Several states have within their community’s monuments and memorials dedicated to the CCC, inarguably one of the most successful federal programs ever established by the United States government. It gave hope, work, housing, and sustenance for over 3,000,000 out of work American men during the course of its existence while literally changing the landscape of the United States, and of its history.

“You Can Thank These Depression Era Workers for Your National Parks”. Erin Blakemore, Smithsonian.com. August 30, 2016