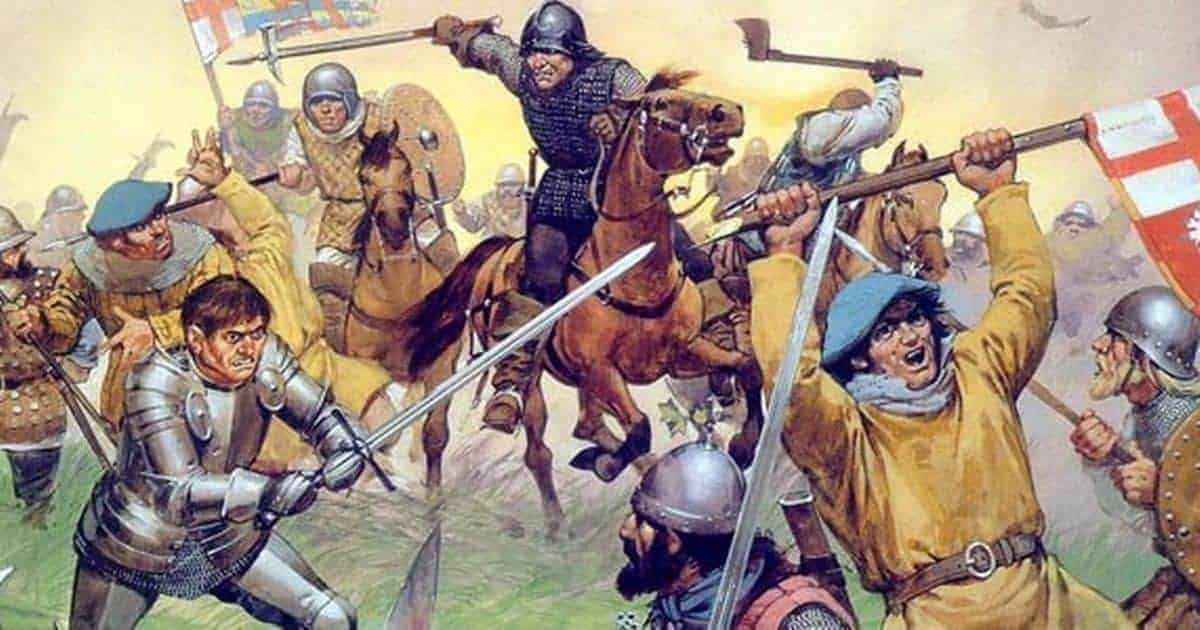 Another reason why James was happy to go into battle was because his army held the superior position. Surrey had heard that James was going to position his troops at Flodden Edge on September 7. Flodden Edge is a hill of approximately 600 feet high and Surrey knew that an attack would be suicidal. He asked James to move position so they could fight on flat ground but the Scottish king naturally refused. Apparently, the irate monarch said “that it was not fitting for an earl to seek to command a king.”

After James’ rebuff, Surrey elected to move his army north-east so it would be a few miles east of the enemy position and also on the opposite side of the River Till. It was a clever move because it enabled him to advance against James from the north, thus avoiding the Scottish artillery which was faced south. This new position also prevented James from retreating back to Scotland without a fight. The Scottish king had watched the English army move towards Berwick before doubling back. It was only then that he realized Surrey’s intention so he ordered his men to march one mile to Branxton Hill.

Despite Surrey’s clever tactical maneuver, the Scots still held the superior battle position and outnumbered the English. However, it was the weaponry which dictated the course of the conflict, with a little help from the predictably bad weather in the region. The Scottish army excelled in the use of massed pike formations which worked extremely well in battles where there was a lot of movement. It preferred to use the high ground for this purpose but at Flodden, it was a terrible mistake because the ground became mucky and slippery underfoot.

As a result, the Scottish army was unable to move as quickly as normal so when the battle began at 4 pm, the English ultimately gained the upper hand. Initially, it seemed as if the Scots would triumph because their enemy’s right flank started to crack under the strain of the massive pike attack. Surrey knew his army was in danger of collapse so he gambled by throwing in his reserve force in a desperate attempt to hold the line. A second Scottish pike attack was slowed down by the boggy ground and the English held firm.

At this point, the Scots dropped their pikes and pulled out their swords. Unfortunately for them, the English army was equipped with the 8.5-foot long bill which was originally an agricultural tool adapted for combat purposes. Meanwhile, the Scottish gunners at the top of the hill were inexperienced and their cannon shots were inaccurate. In contrast, the English gunners were fast and accurate which meant they were able to inflict serious casualties on their enemies. By now, the Battle of Flodden was in the balance and King James decided to roll the dice with one desperate final gamble.

The Death of King James IV

After the failure of two pike attacks, James knew that his best chance of winning the battle was to seek out and kill the Earl of Surrey. He led the Scottish Third Unit on a charge down the hill but once again, the boggy ground hindered its progress. Contemporary accounts suggest that James fought bravely as he made his way towards Surrey and was little more than a sword’s length away from his opposite number before being cut down. An arrow pierced him below the jaw and his throat was slashed by an English bill. Lord Dacre later found James’ body on the field and two captured Scottish nobles confirmed that it was their king.

The Scottish army quickly capitulated upon the death of its leader and the Earl of Surrey captured the enemy’s guns. When the dust had settled, the Scottish army lost anywhere from 10,000 to 17,000 men. Despite being outnumbered, the English army loss approximately 1,500 men. As well as losing James, the Scots also lost most of their nobles including the Earls of Montrose, Bothwell, Argyll, and Lennox. James’ only son was 17 months old and succeeded him as king.

Overall, the Battle of Flodden was a national disaster for Scotland as virtually every noble family lost a brother, father, son, or husband. James IV was the last Scottish king to die in battle on British soil, and the catastrophic defeat ended Scotland’s ambitions of becoming a major European power. Fortunately for Scotland, Henry was probably too preoccupied with his French invasion to order a counter-invasion of Scotland. Henry rewarded Surrey as he became the Earl of Norfolk; it is worth noting that he was 70 years of age at Flodden.

The Scottish Parliament met on October 21 at Stirling Castle and crowned James’ infant son James V. The following month, a French soldier named Antoine d’Arces arrived at Dumbarton with armaments that were sent to Stirling. At this stage, the English were aware of the shipment because they found evidence of it in a paper found in a bag at Flodden. D’Arces pushed for the appointment of the Duke of Albany, John Stewart, as the Regent to rule Scotland until James V came of age.

The Scots were annihilated at the Battle of Flodden because they used the wrong tactics and weaponry. James IV may have been a brave warrior but his failure to properly survey the battleground cost him and his nation dearly. Had he been better prepared, perhaps the Scots could have won and changed the course of history. Incidentally, James IV’s great-grandson, James VI, ultimately became the King of England in 1603 as part of the Stuart line. He gained the English throne after Queen Elizabeth I died without an heir. While James IV failed to make Scotland independent, a member of his family eventually became the enemy’s ruler.

‘Battle of Flodden fights to take its rightful place in Scottish history.’ Robin McKie in The Guardian. August 2013.

‘Your 60-second guide to the Battle of Flodden.’ History Extra. October 2015.

‘The Battle of Flodden.’ Ben Johnson in Historic UK.