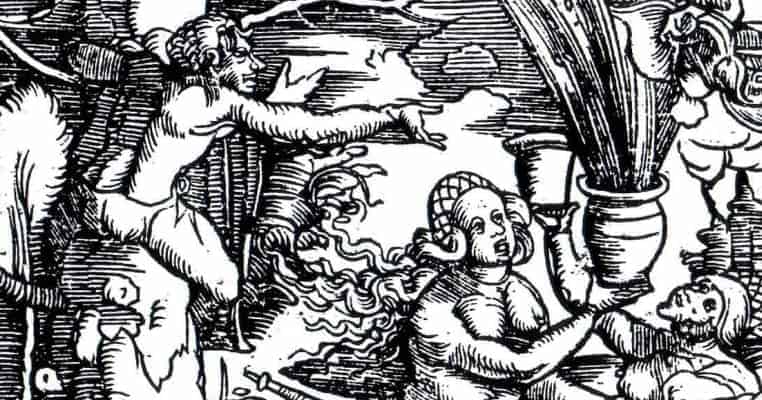 The Fate of Witches In The Age of Enlightenment

Of course, King James VI wasn’t solely responsible for the witch burnings. As the catastrophe continued to worsen, people looked to the church as well, especially after the massive August 1562 thunderstorm that caused darkness at noon and killed cattle, birds, and destroyed houses in a swath consisting of thousands of square kilometers. People were convinced that the Last Judgement had arrived. Famine, poverty, disease, and mass migrations followed all across the continents. There were no existing canonical laws that could explain such weather that seemed at the very least, unnatural, as the work of the devil and his human minions. Overall, the Church remained impassive, except in its most remote outposts, which were located in furthest reaches of the Alps. In these places, local priests convinced themselves and some in their congregations that such horrible weather was being conjured by witches in cahoots with the devil. In these remote parishes, the witch hunts began in earnest.

Now the Church was under increased pressure to act. The common people believed the devastating hailstorms were the work of witches and demanded that the Church do something. So in 1484, Pope Innocence VIII gave in and blamed witches, thus sanctioning the flood of witch burnings that were soon to begin. Large parts of Central and Southern Europe were caught up in the witch trials and the largest legalized massacre was yet to come. Occurring in the territory of Wiesensteig of Helfenstein (now Germany), skies were blackened by the burnings of 63 women at the stake in 1563.

But there were many Churches across Europe, in which people understood that the devastating weather was due to nature, not frail, elderly women trying to survive. In many parts of Europe, people were actively taking an interest in science. Thanks to the influence of science, numerous people wrote against holding witches and sorcerers responsible for the climactic catastrophe. This included the physician Johann Weyer, of the court of Duke Wilhelm of Julich-Kleve. Using logic, Weyer successfully proved there was no way a woman, witch or otherwise, could cause the weather to change.

Before long, others in royal courts across Europe used the law to argue against witch trials, contending that even if it were possible for witches to cause weather havoc, as accepted by Pope Innocence VIII, none of the laws of God called for capital punishment for such offenses. This combination of science and biblical law worked together, thus rescuing elderly women and others from the cruel torment of the witch trials. By the end of the 17th Century, witch hunts had largely ceased, and these women could live their days peacefully in their homes at the edges of local villages, just as their ancestors had before.

The Age of Enlightenment, also called The Age of Reason, was an intellectual movement that pushed reason as an authoritative system that pushed aesthetics, government, ethics, and religion to allow people to objectively seek the truth about reality. Originating at the end of the Thirty Years’ War in 1648, and ending with the French Revolution in 1789, this new way of thinking spurred the revolution of physics that became Newtonian kinematics. Enlightenment thinkers sought to use reason to free humankind from the superstition and religious authoritarianism that spurred wars that brought terrible suffering and death to millions.

Where we get our stuff:

The Witch Hunt of The Little Ice Age, PDF, The Institute of Green Economy.