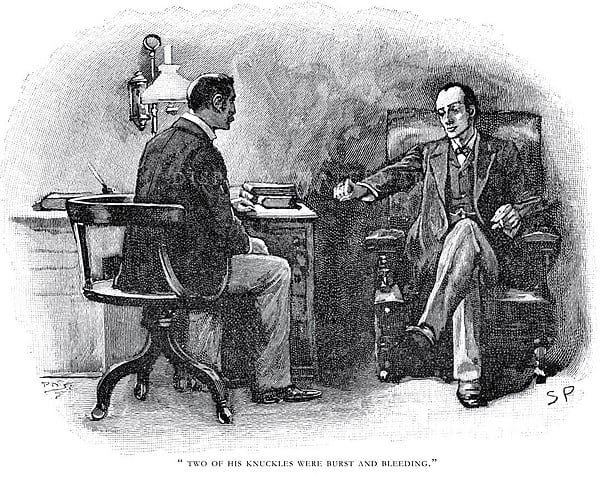 Sherlock Holmes has been portrayed more often, in books, short stories, plays, films, radio and television broadcasts, than any other human character in history, according to the Guinness Book of World Records. His fictional London address, 221B Baker Street, received mail addressed to the detective for decades, despite the address’s non-existence during the period of Holmes’s fictional lifetime. Thousands of authors have written tales featuring or referring to the great detective, as well as other characters created by Arthur Conan Doyle, including Dr. John Watson, Holmes’s brother Mycroft, and the detective’s nemesis, Professor James Moriarty.

Arthur Conan Doyle wrote numerous other works, of historical fiction and medical journals (he was a practicing physician), but none drew the fan attention of his Holmes pieces. At one point, the author was so frustrated by the demand for more stories featuring the detective he killed him off. Fans responded with outrage; one letter received by Doyle began by addressing him as “You Brute”. He was unsuccessful in destroying his creation, and Holmes continues to “live” today, with new members of his family entering the pantheon of his stories from time to time. Here is how Arthur Conan Doyle created Sherlock Holmes, tried to destroy him, and resurrected him to literary immortality.

1. Doyle based Holmes on a real person

Arthur Conan Doyle trained as a physician at Edinburgh, Scotland from 1876 – 1871. While there he served as a clerk for Dr. Joseph Bell, a physician at the Edinburgh Royal Infirmary. Doyle already had literary aspirations, writing several short stories, though he experienced difficulty finding markets for them. During his tenure as Bell’s clerk he noticed his employer frequently consulted with Edinburgh police, who often requested his assistance with difficult investigations. Bell’s powers of observation and his deductive reasoning impressed the police, as well as his young clerk. In 1882, Doyle established his own practice, in Portsmouth, England, with an office in Southsea.

He found the lack of patients distressing, and the poor state of his finances impelled him to return to writing fiction. In 1886 the 27-year old doctor took but three weeks to complete a short novel, in which he introduced Sherlock Holmes. Entitled A Study in Scarlet, which comes from an utterance by Holmes to his recently met roommate Dr. John Watson, it appeared in Beeton’s Christmas Annual the following year. Holmes was imbued with the traits exhibited by Dr. Bell in his interactions with the police, among them the use of a magnifying glass to examine evidence. Holmes also exhibited the seemingly astonishing ability to deduce a person’s background, habits, and even marital state with a cursory glance, often discomfiting to a visitor for its accuracy.