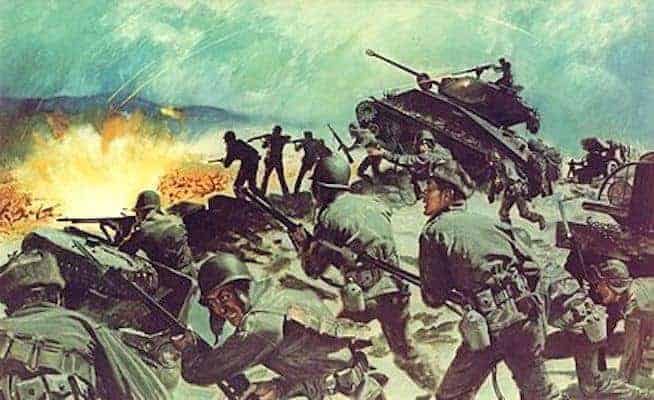 In 1950, the communist regime in North Korea under Kim Il-Sung launched a surprise attack against the democratic South. Caught completely off guard, the South Korean Army and the few United States troops in the country were pushed back towards the sea. Though at first it looked like the communist troops might completely take over the country, the Allied troops managed to hold onto a defensive line near the city of Busan. As the intense fighting ground to a stalemate, troops from around the world poured into Korea to take up the fight against the communists. The Korean War was now in full swing.

Officially, the effort to save South Korea was led by the United Nations. But effectively, the American troops under General MacArthur were taking the lead. And MacArthur had a daring plan to turn the tide of the war. In September, MacArthur launched a surprise amphibious assault at the city of Inchon. The risky attack was a spectacular success. And within two weeks, the UN troops had recaptured the city of Seoul. At risk of being completely surrounded, the North Korean troops were forced to flee back to the North.

The UN troops pursued the retreating North Koreans, engaging in fierce fighting and heavy bombing campaigns that left a trail of destruction all the way to the border with China. As UN troops approached the Yalu River, the boundary between Korea and China, the Chinese Communist Party began to worry about the possibility of a US-allied Korea on their border. The Chinese Civil War had ended with a communist victory just one year before, and now Chairman Mao thought that US troops might not stop at the Yalu, but instead decide to invade China to restore the Nationalist government.

Meanwhile, President Truman worried that the Chinese might decide to enter the fight on the side of the North Koreans. He ordered MacArthur not to come to close to the Yalu and provoke the Chinese. However, MacArthur was skeptical that the Chinese would risk an all-out war with the US and began preparing a final offensive to finally crush the North Koreans. Already, the UN troops had met small units of Chinese troops in battle. But MacArthur argued that these were just volunteers, not troops acting on the official orders of the government. But by November, 300,000 Chinese troops had gathered near the border.

On November 25th, China officially entered the war. Hundreds of thousands of troops launched brutal human wave assaults against the UN forces. In spite of horrendous losses, the Chinese attacks began to overwhelm the defenders. Soon, MacArthur’s troops were being driven back to Seoul. Things looked bleak, and plans were made to withdraw from the country completely. But for one unit, the 23rd Regimental Combat Team, the real fight was just beginning. The regiment decided to make a final stand by the tiny city of Chipyong-ni, and it was now up to them to hold the line against a force that outnumbered them 5-to-1.