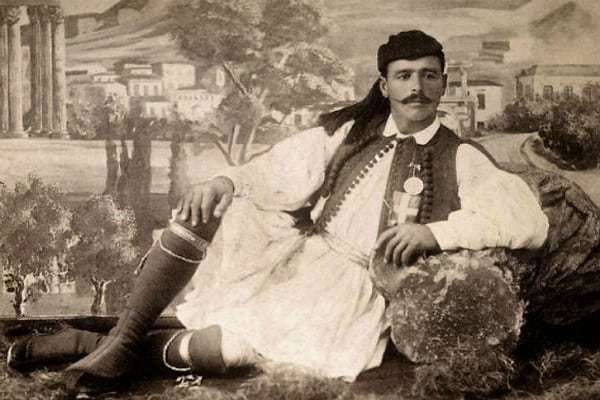 Spyros Louis was born on January 12, 1873, in Marousi, Attica (a northeastern suburb in Athens), to a very poor peasant family. His father was a water carrier and young Spyros helped him carry water from a very young age. He would cover great distances on a daily basis carrying jugs of water on his shoulders. During his military service he was distinguished for his incredible stamina and athleticism, which surprised his superiors. According to several historical sources, Louis once ran from downtown Athens to Marousi and back, a distance of 8.8 miles (14.1 kilometers) each way, to retrieve his peaked cap, which he had forgotten at home, in less time than carriages covered the same distance back then.

Due to his astonishing athletic achievements, Spyros Louis was the only one of seventeen men taking part in the first Olympic marathon (run on April 10 in the first modern Olympics of 1896, in Athens) who wasn’t considered a competitive athlete. The man who convinced Louis to participate was an army colonel named Papadiamantopoulos; he knew about Louis’s rare athleticism and potential because he had been his commanding officer in the military, in which Louis had finished serving the previous year.

However, Louis didn’t perform that well at the qualifying race a few weeks before the Olympic Games and he only finished fifth mainly because of his inexperience in such events, but he was still able to take part in the Olympics since Greece was the host nation and could register more athletes than any other country, an Olympic tradition that is still valid today.

Despite the fact that the Greek athletes, who far outnumbered the competitors from the other 13 participating nations, had performed well and had won multiple medals so far at the Games, the local fans had been waiting for the marathon more than any other event probably because of the historical connection it had to the legendary story of the messenger Pheidippides, who ran from the town of Marathon to Athens to announce the Athenian victory in the Battle of Marathon.

Also, the fact that an American athlete named Robert Garrett won the gold medal in the discus throw, considered at the time the most revered of ancient Greek events, had been particularly painful for the Greek crowd and they were now looking for redemption through the marathon.

During the course of the race Louis showed remarkable confidence and lack of professionalism, to the point where some of the other competitors felt disrespected, but his amazing stamina and athleticism were the key factors in his victory. The heavy favorites before the race, Frenchman Albin Lermusiaux, who had already won bronze in the final of the 1500 meters and led for the better part of the marathon, and legendary Australian runner Edwin Flack, who had already won gold in the 800 and 1500 meters, both collapsed and couldn’t continue while the durable Louis prevailed.

When Louis approached the Panathenaic Stadium, where the finish of the marathon took place, the pandemonium that followed from 80,000 local fans can’t be described any better than by the remaining official reports of the event,

Here the Olympic Victor was received with full honor; the King rose from his seat and congratulated him most warmly on his success. Some of the King’s aides-de-camp, and several members of the Committee went so far as to kiss and embrace the victor, who finally was carried in triumph to the retiring room under the vaulted entrance. The scene witnessed then inside the Stadium cannot be easily described, and even foreigners were carried away by the general enthusiasm.

It is also reported that the then king of Greece, George I, was so thrilled with excitement and pride that offered Louis any gift or prize he desired and the only thing Louis asked for was a donkey-drawn carriage to help him and his father in their water-carrying business.

France, Australia, and the USA, heavily insulted and embarrassed by the fact that their well-trained athletes had lost to a water carrier from Athens, protested against Louis’s victory by accusing him of covering part of the course by carriage. Of course, these accusations were found to be false since it was bronze medalist Spiridon Belokas who was found cheating, not Louis.

As a result, Belokas was disqualified and the bronze medal went to Hungarian athlete Gyula Kellner. The finishing time for Louis was 2 hours, 58 minutes, and 50 seconds, almost 55 minutes more than the current world record, but during the race he stopped several times for unbelievable reasons such as having a chat with people he knew and to drink a glass of cognac with his father-in-law. More amazing, while the rest of the competitors were fueled by juices and water (just like modern athletes), Louis was fueled along the way by wine, cognac, milk, beer, an Easter egg(!) and some orange juice near the end.

Interestingly, many modern running experts have suggested that if Louis had taken running seriously and trained like a seasoned athlete he could have achieved times pretty close to those of modern athletes. Research at the University of Athens showed that even with the poor preparation he had before the Olympic Games, if he had stayed focused during the race and didn’t lose so much time talking or drinking with people he met while running, he could have achieved a time under 2 hours and 30 minutes, a phenomenal world record for his time.

Furthermore, along with the medal he received, Louis was also awarded a silver cup that was sold for $860,000 in London on April 18, 2012, breaking at the time the auction record for Olympic memorabilia. The buyer was the Stavros Niarchos Foundation, whose owner is one of Greece’s most famous billionaires, and the foundation stated at the time that it plans to build a major cultural center in Athens, where the Olympic cup will go on display beginning in 2016, just like it actually happened. Meanwhile, the silver cup was displayed at the Acropolis Museum in Athens.

Life After Olympic Victory and Legacy

After his epic victory, Louis never ran again because his heart was never in athletics despite the athletic gifts nature had so generously given him, and he continued living and working in his small business. However, he was regarded as a Greek national icon and a sports hero in most of Europe as well since he was regarded as the first marathon winner of the modern Olympics, which was the most significant Olympic event for the better part of the first half of the twentieth century.

Forty years after his marathon victory and only four years before his death, Louis made his last public appearance, when he was invited to be the guest of honor by the German organizers of the 1936 Summer Olympics in Berlin. After bearing the flag of the Greek team during the opening ceremony, he was received with honors by Adolf Hitler, who was a big fan of Louis, and even offered him an olive branch from Olympia, the birthplace of the Olympic Games, as a sign of respect and peace.

Despite the remarkable kindness, admiration, and hospitality Hitler showed the Olympic champion, Louis was the only member of the Greek team who did not greet him with the popular Nazi salute, which surprisingly didn’t bother Hitler at all. When Louis was asked by German and Greek journalists to recall some of his most memorable moments after his triumph he said,

That hour was something unimaginable and it still appears to me in my memory like a dream. . . . Twigs and flowers were raining down on me. Everybody was calling out my name and throwing their hats in the air.

Unfortunately and despite the joy and pride Louis had given to Greece, he died poor and forgotten by the state on March 26, 1940. His legacy, however, is still alive to this day. The Olympic Stadium of Athens, where a major portion of the 2004 Olympics took place, is named Spiros Louis after him.

The Jayne Mansfield movie It Happened in Athens was heavily based on Louis and his marathon triumph. Apparently Mansfield had read his story and was a fan. “Γίνομαι Λούης,” is a Greek expression which is still used to this day, and translates as “I am becοming Louis,” and is used when someone wants to say he has tο rush and then disappears by running fast.

In 2012, a new style of Vibram FiveFingers called the Spyridon LS was launched in honor of Louis, but the significance of his victory and his legacy is greater than any movie or pair of sports shoes inspired by him, as John MacAloon, a University of Chicago professor, Coubertin’s biographer, and an authority on the Olympic Games, says,

Without Louis, the Athens Games would have no epic hero, no master symbol to condense and express so richly so many ideological, sociological, and historical themes. The modern Olympic Games would have been less likely to survive the traumas of the next twelve years if it wasn’t for the symbolic capital of those ‘indescribable’ and ‘unforgettable’ moments in the Panathenaic Stadium when Louis entered it on April 10, 1896.

And MacAloon continues by reminding us of the importance of Louis’s triumph:

While it is not clear how thoroughly he recognized it, Coubertin had found his most potent ally in the peasant from Marousi. Indeed, it may be fairly said of Louis that, more than any man but Coubertin, he created the modern Olympic Games.

Last but not least, with a total population of 2,433,802 back in 1896, Greece won an impressive 46 medals, more than any other participating nation at the first Olympics. It still holds the world record for most medals per capita in a single Olympic Games, with one medal for every 52,908 citizens.