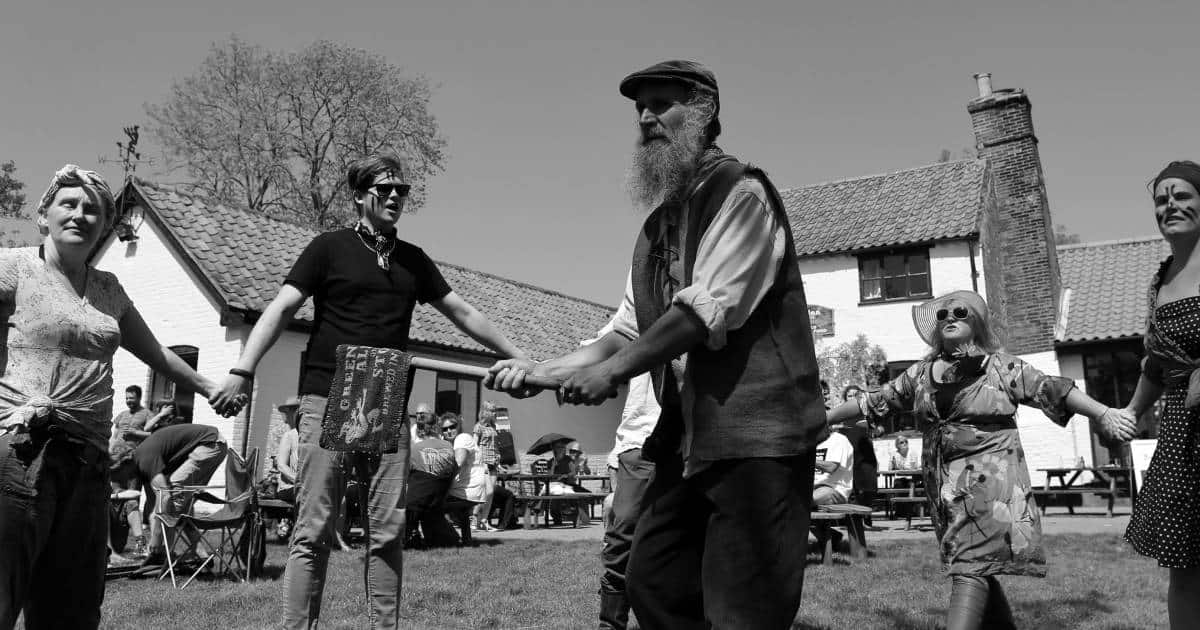 15. Caber Tossing is throwing a huge tree trunk while wearing a kilt

You know that strapping Scotsman with rippling muscles and a jaunty kilt inexplicably holding a tree trunk on your breakfast oats? He’s actually playing a sport. Caber Tossing, as the activity is known, is a traditional Scottish game, in which large men have to lob a 5.94-meter, 79-kilo tree trunk, known as a Caber, so that it flips and lands upright. Points are scored for how straight the Caber lands. It really is that simple. Except the tree weighs a tonne, is too tall to keep upright for long, and has one heavier end to make it even harder.

Caber Tossing is an ancient sport, first recorded back in 1574 but certainly much older. â€˜Caber’ is actually a Gaelic word, and it is thought that the sport came from the need to toss tree trunks across Scotland’s many freezing waterways to let armies cross during battles. This is probably why accuracy rather than distance is the deciding factor in the modern Caber Toss event. Although it remains a staple of the annual Highland Games, Caber Tossing is played around the world, and in June 2018 a Canadian, Danny Frame, threw a record 18 Cabers in an astonishing 3 minutes.

16. Bat and Trap is the drunken British cousin of baseball

England is world-famous for its pubs. An essential part of English life for centuries, the pub was once the social hub for communities, where competitive games were played. The amount of time people once spent in pubs thus led to the invention of some very unusual sports. Bat and Trap is one example, and involved someone hitting a spring mechanism with a bat to fire a ball in the air, which they then had to try to hit through two posts. If opponents standing between the posts caught the struck ball before it hit the ground, the batter was out.

Bat and Trap is first recorded as being played in 1671 in the West Country, but it is thought to be much older. The idea for the game possibly derived from games played by milkmaids and shepherds to pass the time during the agricultural day. Sadly, it died out in the 18th century, but was revived by Major Grantham of Balneath Manor, Sussex, in 1916. Grantham identified the sport as a suitable pastime for convalescing soldiers from the battlefields of World War I, and the sport has been played, chiefly by old people, under the radar ever since.

17. What better way to pass the time in the African bush than seeing who can spit antelope dung the furthest?

Amongst the beautiful fauna of Africa, the great Kudu antelope is one of the most spectacular. A large, attractively striped and enviably-horned beast, the Kudu has long been high on the list of trophies for big game hunters. Unfortunately, they are very difficult to track down, despite leaving piles of excrement everywhere they go. At some stage or other, Afrikaner hunters found a novel way to pass the time on lengthy Kudu hunts: putting Kudu dung in their mouths, and seeing who could spit it the furthest. Fun, right? So fun, in fact, that there is now a World Championship.

Kudu Dung-Spitting, or Bokdrol Spoeg, is played exclusively by Afrikaners, and though it is uncertain when it was invented, the reluctance of other African communities to play the sport gives us a handy terminus post quem of the arrival of the Dutch to South Africa in the 17th century. The game is won by the person who can spit the dung the furthest, which is measured by where it comes to a rest rather than where it lands. The current world record spit of 15.56 meters is held by Shaun van Rensburg, who achieved the impressive feat in 2006.

18. Since the 16th century, chaffinches have been competing to sing the most songs in an hour across Belgium and the Netherlands

Birdsong, in case you didn’t know, is a territorial behavior intended to warn off rivals. Though at times it seems to be for our edification, this is the avian equivalent of shouting obscenities at your neighbors. In medieval Europe, someone hit upon the idea of starting a competition to see which bird could sing the loudest and most frequently in a set period of time, and thus the sport of Finching, or Vinkensport, was born. Finching involves placing boxed male chaffinches next to each other to provoke a verbal tirade, and keeping a tally of which is the most vociferous.

There are very strict rules for what constitutes a proper song. The chaffinches must end each call with a correct flourish – known phonetically as a susk-e-wiet – to score a point, which is added to a tally on a chalkboard. Singing a wrong note means instant disqualification. Matches are held on streets, with a judge keeping a close eye on affairs. Traditionally, it was a practice of chaffinch trainers, or vinkeniers, to blind their birds with hot needles to prevent distraction, but this aspect of an already controversial sport amongst animal rights activists has been banned for a long time.

The first recorded instance of competitive chaffinch-singing took place in 1593, but Vinkensport is still popular today, with 13, 000 vinkeniers breeding 10, 000 birds a year in 2007. Keeping a bird in a wooden box to sing is not only mean, but open to corruption. The champion bird Schauvlieghe, which managed a record tally of 1, 278 susk-e-wiets in an hour, was rumored to have been injected with testosterone. Recently, one trainer had a bird that sang exactly 725 times an hour every match. Suspicious, the judge opened the vinkenier‘s box to find a CD player playing chaffinch songs.

19. Ferret-Legging was a competition to see who could keep the most ferrets down their trousers for the longest period of time

The ferret, a domesticated form of the polecat, is a tenacious mustelid. Ferrets have long been used for hunting, as their slender build and aggression makes them ever-willing to follow larger mammals down burrows. So why not drop them down your trousers? Incredibly, this seemed such a good idea in Britain that competitions were staged. Essentially, a group of men would put as many down their trousers as they could fit, and see how long they could endure a sharp-fanged carnivore attempting to bite their way out. The current record, depending on your source, sits at around the 5-hour mark.

The ferret’s small size and effectiveness against quarry such as rabbits meant that it was a favorite amongst poachers. In Britain, it was illegal for centuries for common people to own hunting dogs or firearms, and so the easily-concealed ferret was popular for acquiring sly rabbits for the pot. When confronted by a gamekeeper or policeman, the poacher could simply slip the ferret down their trousers and try to keep as still as possible whilst the animal tried to escape: a new sport was born! Since the 1970s, Ferret-Legging has inexplicably risen in popularity, and is played around the world.

20. The Victorians loved walking so much that they invented a sport of competitive rambling

Charles Dickens, the famous writer, would frequently walk the 30 miles from his home in Kent to his London residence, and think nothing of it. Amazingly, this was far from remarkable behavior in his day, for the strange sport of Pedestrianism, competitive long-distance walking, was already very much in vogue. The sport was so popular that there were even professional pedestrians who were amongst the most famous people in the country. Although organized race walking is an Olympic sport today, Pedestrianism was comically low-key, and simply involved walking from place to place across the country as fast as possible.

One of the most famous pedestrians was Foster Powell (above), who once walked 50 miles in 7 hours in 1764. This event, undertaken for a wager, made the sport a national obsession, and Powell went on walk the 396 miles between London and York in 140 hours. Robert Barclay Allardice turned the sport into a lucrative event, and made vast sums by achieving such feats as walking 1, 000 miles in 1,000 hours. With no formal organization, the sport was funded entirely by wagers, and spectators thronged the public byways to catch a glimpse of a solitary man… walking.