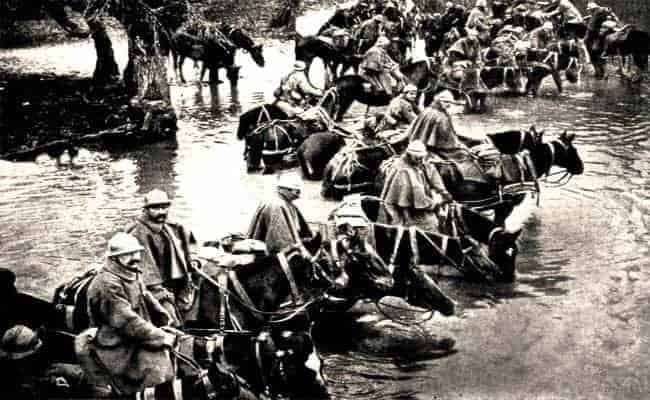 4. It included some of World War I’s most devastating uses of artillery.

Approximately seventy percent of the 800,000 casualties at Verdun were caused by artillery. During their opening bombardment, the Germans launched two million shells. Compared to other engagements at that time, this became the largest and longest artillery bombardment yet seen.In fact, at the time of war, the two sides eventually fired between 40 and 60 million shells. Rumbles from the barrages were heard as far as 100 miles away, and soldiers described certain hills as being so heavily bombed that they gushed fire like volcanoes. Men were nearly disintegrated by the showers of artillery and thousands of bodies were unrecognizable. Those lucky enough to survive were often left with severe shell shock. “You eat beside the dead”, two French soldiers wrote, “you drink beside the dead, you relieve yourself beside the dead, and you sleep beside the dead.”

Many of those dead remain in Verdun today. A large stretch around the fortified city remains closed to the public today because of the amount of damage done to the environment by the shelling. While there were efforts to clean up the shells, shrapnel, unexploded bombs and bodies after the war the job was insurmountable. Even as far into the 1970s, there were continued efforts to clear the shrapnel and there were dumping grounds for farmers to put shells they found on their land. But in 2012, studies done in the area still found alarming levels of arsenic in the ground and the war, causing them to close off the area.

New cleanup efforts continue but still today farmers will come upon shells with their tractors. Some have barely escaped with their lives as the shells cause explosions which destroy their tractors as they ride them. Each year 900 pounds of shells are discovered by farmers and current cleanup crews estimate that at the current rate of cleanup, the job will take hundreds of years.