Aqua Tofana: How Giulia Tofana Helped Women get Rid of their Husbands 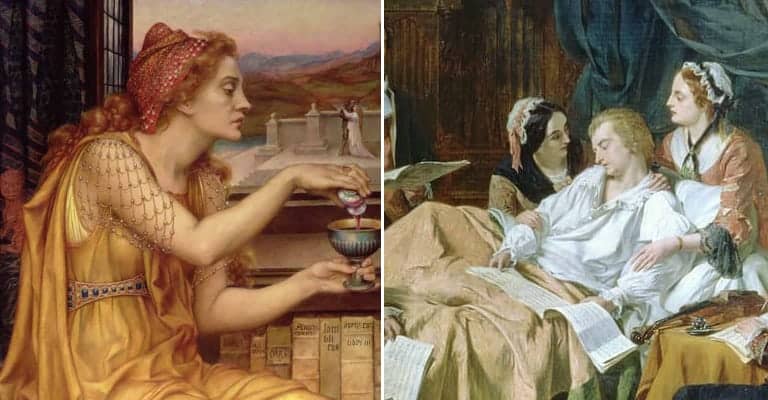 Given her sideline business as a purveyor of poison, discretion was, understandably, extremely vital to Tofana. She was reportedly quite selective in just whom she sold Aqua Tofana to, and accepted as clients only those who had been vouched for by previous satisfied customers. Former clients, who had committed murder by using Tofana’s toxin, risked almost as much as Tofana if their prior business dealings came to light. As such, they had every incentive to vouch only for those in whose discretion they had absolute trust.

Such precautions allowed Tofana, first working solo and then with her daughter, to go undetected for decades. It all came crashing down, however, because a new client got cold feet. Reportedly, a woman bought Aqua Tofana and put it in her husband’s soup, but then had a last-minute attack of conscience, changed her mind, and stopped her hubby from sipping the soup. His suspicions aroused, the husband forced his repentant wife to tell the truth, and then dragged her off to the Papal authorities to tell them what she had told him. The cat was out of the bag, but Tofana was not arrested immediately: warned, she fled to a nearby church and sought sanctuary, which was granted.

Tofana’s sanctuary did not last for long: a rumor spread throughout Rome that she had poisoned the city’s water supply, so a mob stormed the church, and seized her. She was handed over to the Papal authorities, who tortured her until she confessed to poisoning over 600 men between 1633 and 1651. In July of 1659, Giulia Tofana, her daughter Girolama Sperla, and three employees were executed in Rome’s Campo di Fiori. Her corpse was then thrown over the wall into the church that had offered her sanctuary. Some of her clients and accomplices were executed outright, while others were bricked into the dungeons of the Palace of the Holy Office. Others, who were well connected, got away.

It is possible that the number of Tofana’s victims was exaggerated – she was tortured during the investigation, after all, and people can say the darndest things under torture to make it stop. Indeed, considering that much of the evidence against her consisted of confessions extracted under torture, it is even possible that Giulia Tofana could have been completely innocent. She might well have simply been a woman dabbling in cosmetics, at a time when a literal witch-hunt mania was sweeping Europe, and women doing anything unusual were suspect.

The legacy of Giulia Tofana and her poison survived long after her death. In 1791, when the composer Amadeus Mozart fell seriously ill, he became convinced that he had been poisoned. As he put it: “I will not last much longer; I am sure that I have been poisoned. I cannot rid myself of this idea … Someone has given me Aqua Tofana and calculated the precise time of my death“. Mozart was almost certainly mistaken, and historians believe he died of rheumatic fever, syphilis, or from having eaten undercooked pork. His paranoia – shared by many who took ill in those days of poor medical diagnosis – was testimony to the continuing terror inspired by Tofana and her deadly concoction.