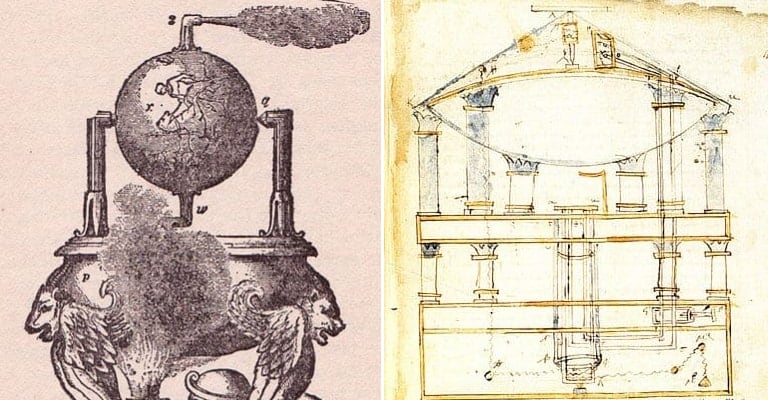 In 1681, French-born Denis Papin made a unique discovery after an unfortunate accident with a pressure cooker. Papin’s attempts to extract fat from animal bones in a steam induced high-pressured container were a failure when the vessel exploded. However, before the unfortunate termination of his experiment, Papin had observed how the steam raised the lid of his pot. It was the inspiration Papin needed to conceive a prototype steam driven piston. Papin’s experiment in its turn formed in 1705, the basis for Thomas Savoy’s steam engine, which played such a vital role in the early industrial revolution.

Papin’s chance invention, however, was not the first steam engine. The ancient Greeks had already been playing around with the uses of steam from the fourth century BC. However, the invention of the first steam-propelled mechanism, the aeolipile, dates to the first century BC and can be credited to Hero of Alexandria, an Alexandrian scientist and inventor. Although classical scientists never fully explored the potential of Hero’s aeolipile in ancient times, its technology may have informed steam-based technology even before Papin’s time.

The Life and Work of Hero of Alexandria

Hero of Alexandria was a mathematician, physicist and engineer who lived and worked sometime during the first century BC and who established and ran the Higher Technical School in Alexandria. During his tenure as the school’s director, Hero taught and lectured students as well as continuing with his own research projects. Hero was particularly involved in building upon the work of Ctesibius, one of the greatest mechanical inventors of the ancient world and a fellow Alexandrian who had lived two centuries previously.

Hero’s lecture notes and other papers on physics, mechanics and maths were well thought of as they were replicated often enough for an impressive number of them to survive to this day. Their subject matter was varied. In his Hydria, Hero explored the mechanical uses of water while his Belopoetica, (which was influenced by the fourth-century BC Athenian architect, Philon and Hero’s contemporary, the Roman engineer Vitruvius); the tutor and engineer explored new design for war machines.

Some of Hero’s ideas were particularly original. In On the Dioptra, Hero explored the possibility of measuring distances using astronomy. He took as his example the distance between Rome and Alexandria, using an eclipse of the moon as his astronomical benchmark. Hero observed the differences between the local times in each city when the eclipse was visible to calculate the distance. In 1938, Hero’s description of this eclipse allowed science historian Otto Eduard Neugebauer to match it with the event which took place in Alexandria at 11 pm on March 13, 62BC- thus establishing Hero’s period as the first century BC.

It was Hero’s Pneumatics, however, that tackled the subject of Invention. The volume divided into two books, both of which explored various mechanical devices which, when driven by air, water- or steam- replicated the movements of living things. The book contained many novelties that Hero used as teaching devices for his students. One example was a puppet theatre, where a combination of drums and weights moved the strings of the ‘players’. Another similar device was a steam operated ‘temple wonder’ that turned out to be well ahead of its time: the aeolipile.

Hero of Alexandria was not the first ancient scientist to toy with steam driven devices. According to Leonardo da Vinci, the fourth-century Greek scientist Archimedes invented one of the first steam driven devices in 330BC. The invention was a steam-powered cannon, fueled by water heated over coals. According to Da Vinci, the device could hurl 70-pound iron balls at the enemy. Archimedes was later followed by Hero’s ‘hero’, Ctesibius who in 250BC invented a water-filled metal sphere that rotated when heated or placed in water. It could be Ctesibius’s device formed the inspiration behind Hero’s aeolipile.

Hero named his steam-powered machine after Aeolus, the Greek god of wind. His description of the device and how to use it was relatively brief. ” Place a cauldron over a fire: a ball shall revolve on a pivot, “began the brief passage in his Pneumatics. The aeolipile’s operator was then instructed to light a fire” under a cauldron containing water and covered at the mouth by the lid; with this, the bent tube communicates, the extremity of the tube being fitted into a hollow ball.

The description of the aeolipile’s design and use continues as follows: “Opposite to the extremity place a pivot resting on the lid and let the ball contain two bent pipes, communicating with it at the opposite extremities of a diameter and bent in opposite directions, the bends being at right angles. As the cauldron gets hot, it will be found that the steam entering the ball passes out through the bent tubes towards the lid and causes the ball to revolve.”

Although Hero’s contemporary, Vitruvius also refers to the aeolipile, Hero’s description and explanation of the device’s workings is the first detailed account of this particular form of machine. For although Archimedes may have pioneered the use of steam in propulsion and Ctesibius the application of heat to cause rotation, Hero’s device was the first to combine the two principles to use steam to drive a rotor. In effect, Hero of Alexandria had devised an early form of the steam engine- sixteen centuries before society recognised its invention.

The Loss and Rediscovery of the Steam Engine

However, in Hero’s day, the aeolipile was never widely used. For ancient Alexandria was not a mechanised society, and so the machine could only have a limited, novelty appeal. At best it would have been viewed as a teaching device, illustrating Hero’s principles- nothing more. So, the description of the aeolipile loitered dormant and disregarded in Hero’s papers, while time moved on and the use of steam faded. In the tenth century, there was a brief revival of interest, when a priest called Gerbert installed a steam-based hydraulic organ in a church in Rheims. However, it was not until the Renaissance that inventors and scientists once again noticed steam power.

These early Renaissance steam machines were much simpler than Hero’s aeolipile- although they had the same novelty value. In 1551, an Arabic inventor, Taqi al-Din created a rudimentary steam turbine which used a jet of steam to rotate a spit. By the seventeenth century, the Europeans had joined the trend. In 1615, Sol de Caus, a German engineer who worked for the elector palatine of Heidelberg, described his steam machine, a simple device that forced water in a copper wall through a tube through the application of steam.

In 1629, an Italian inventor Giovanni Branca constructed a ‘windmill’, whose wheel was turned by steam generated in a boiler. The games with steam then continued in England when in 1647, Nat Nye, a mathematician had the idea of powering guns with steam rather than gunpowder. The idea was a non-starter. In fact, it was another 30 years before a serious contender for a steam-powered machine to match that of Hero’s was on the horizon when in 1679, Denis Papin’s botched pressure-cooker experiment allowed him to conceive the notion of a steam engine. None of these attempts, however, were directly informed by Hero’s aeolipile.

However, it seems that there may have been a serious attempt to utilise Hero’s aeolipile and create a steam-powered machine a century before Papin. Documents preserved in the Royal Spanish Archives in Simancas suggest that in 1543, a Spanish naval captain called Blasco de Garay displayed a steam-powered ship in Barcelona harbour before Charles V, the Holy Roman emperor. The ship incorporated a copper boiler that produced the steam to turn two large wheels on either side of the vessel- thus propelling it through the water without the need for sails.

There are problems in authenticating this attempt. Apart from the fact that the steam-powered ship did not take off, the documents referring to the incident only date back to 1826. Furthermore, the sixteenth century was not a time Spain was noted to be involved with explorations of steam. However, even though the first Italian translation of Hero’s Pneumatics was still four years away, it is not inconceivable that de Garay had not acquired a working knowledge of Hero’s methods from elsewhere. By marrying these methods with elements of Roman and medieval naval technology, it may have been possible to produce a prototype steamship- and the first ever practical application of Hero’s aeolipile.

Where do we get this stuff? Here are our sources.

Heron of Alexandria, School of Mathematics and Statistics, University of St Andrews, Scotland, 1999

Who’s who in the Greek World, John Hazel, Routledge, 2002