Here's Why King Tut, Ancient Egypt's Most Famous Pharaoh, Was Actually One of its Least Significant Rulers 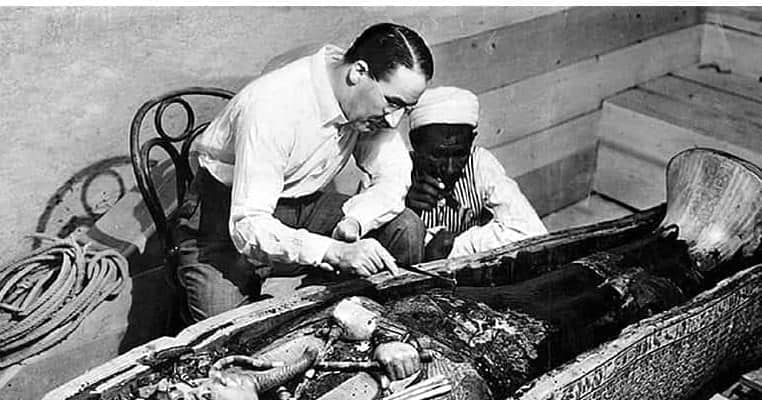 Here’s Why King Tut, Ancient Egypt’s Most Famous Pharaoh, Was Actually One of its Least Significant Rulers

Tutankhamen (reigned circa 1333 – 1323 BC), is Ancient Egypt’s best known pharaoh, and the discovery of his tomb in 1922 was one of archaeology’s most significant events. Relics from Tutankhamen’s tomb are among the most travelled artifacts in the world, and a 1970s exhibition tour, known as the Treasures of Tutankhamen tour, was viewed by millions around the world, many of them having waited in line for hours. That Tutankhamen became so famous thousands of years after his death is ironic: Ancient Egyptians viewed him as one of their least significant or memorable rulers.

The Discovery of King Tut’s Tomb

In November of 1922, after a search that had lasted for over a decade, Egyptologist Howard Carter discovered the tomb of pharaoh Tutankhamen, in Egypt’s Valley of the Kings. He sent a telegram to the chief financier of his archaeological expeditions, George Herbert, 5th Lord of Carnarvon, urging him to hurry to Egypt to witness the opening of the tomb in person. After his patron arrived later that month, Howard Carter proceeded to carefully excavate the site, and on November 29th, 1922, the tomb was opened.

After making his way through a tunnel, Carter reached the main burial chamber. There, he made a hole in a sealed door, then thrust a candle inside. After a pause, an eager Lord Carnarvon asked him “can you see anything?” He received the reply “Yes, wonderful things!” As Carter described it later: “as my eyes grew accustomed to the light, details of the room within emerged slowly from the mist, strange animals, statues, and gold – everywhere the glint of gold“. The following day, the dramatic discovery was announced to the press, catapulting Carter and Tutankhamen to global fame.

The burial chamber was dominated by four shrines, surrounding the pharaoh’s granite sarcophagus. Within were three coffins, nestled inside one another, with the outer two being made of gilded wood, while the innermost one was composed of about 250 pounds of solid gold. It contained the mummified body of Tutankhamen, adorned with a funerary gold mask that weighed about 25 pounds. That death mask, with features simultaneously so familiar and yet so exotic, became the best known symbol of Ancient Egypt.

In addition, there were about 5400 other items in the tomb. They ran the gamut, and included a throne, wine jars, statues of various gods and of the king, and even two fetuses that subsequent DNA examination revealed to have been the stillborn offspring of Tutankhamen. It would take Carter nearly a decade before he could finish cataloguing them them all. Amazingly, the rich haul was what was left over after ancient robbers had twice tunnelled their way into the tomb. Both times, the robbery was discovered, and the tunnels filled in.

The find triggered a wave of Egyptomania. Tutankhamen came to be known as “King Tut” – a name that was soon appropriated by businesses to brand various products. Ancient Egyptian references made their way into popular culture, and musical hits such as “Old King Tut” became all the rage. Even US president Herbert Hoover caught the Tutankhamen bug, and named his pet dog King Tut. Subsequent research has revealed, however, that while Tutankhamen is undoubtedly the most famous Egyptian pharaoh today, he was one of the least significant pharaohs back in Ancient Egypt.

The Temple of the gods at Karnak, near Luxor, was Ancient Egypt’s religious center from roughly 2100 BC until the death of Cleopatra in 30 BC. A vast complex covering hundreds of acres and dedicated to the worship of a pantheon of god, chief among them the main deity Amun-Ra, the priests of Karnak grew so powerful that they alarmed the pharaohs. One of them, Amenhotep III (reigned 1388 – 1351 BC), tried to check them by appointing his own relatives to serve in the temple in order to guarantee the priests’ loyalty. His successor Akhenaten (reigned 1351 – 1334 BC) hit upon a more radical solution: he invented a new religion, and built a new temple complex to rival and replace Karnak.

Akhenaten and his wife-sister (Egyptian pharaohs tended to keep it in the family) Nefertiti set up the world’s first monotheistic religion, centered around the worship of the sun deity, Aten. At first, Akhenaten added an extension to the Karnak Temple, dedicated to his god Aten, but when he encountered resistance from the established priesthood, he decided upon radical and wholesale reforms. The pharaoh began dismantling his realm’s traditional religious pantheon, and replaced its many gods with a single one: Aten.

As is often the case with recent converts, Akhenaten became a zealot, and radically altered the way in which worship was to be conducted. Until then, and for centuries prior, the conduit between Egyptians and their gods was the priesthood, who acted as middlemen between mortals and deities. Akhenaten displaced the priesthood, and made himself and his sister-wife, Nefertiti, the main conduit through which divine blessings could flow. When the priests objected, the royal couple closed Karnak’s temple, fired its priests, and seized its treasury. They then moved their entire court about 300 miles to the north, and built a new city and temple complex at Amarna, dedicated to Aten.

Egypt, whose religion and religious establishment were overturned and displaced seemingly overnight, was plunged into spiritual and political turmoil, and when Akhenaten finally died after a 17 year reign, Egypt was bankrupt. His sister-wife, Nefertiti, tried to continue on his path, acting as regent for her stepson and nephew, Akhenaten’s 7 year old son with another sister. However, she ended up losing a political struggle at court, and power went instead to a Grand Vizier named Ay, who became the child pharaoh’s chief adviser.

The new ruler had been named Tutankhaten at birth, meaning “Living Image of Aten” – after the Sun god whom his father Akhenaten had ordered worshipped instead of Amun. After his ascension to the throne as a child, he changed his name – or had it changed for him by his advisers – to Tutankhamen, meaning “Living Image of Amun”. It heralded a rejection of his father’s religious revolution, and a counter revolution that restored Egypt’s old gods and traditional ways of worship, starting with the abandonment, and eventual destruction, of Akhenaten’s reilgious center at Amarna.

For all his fabled wealth, Tutankhamen was actually a fairly insignificant pharaoh. Aside from being a child king for most of his reign, with real power wielded by his advisors, he was physically disabled and sickly. A product of generations of incest, Tutankhamen’s corpse exhibited many congenital defects caused by inbreeding. Among his ailments, he had a clubbed foot, and needed a cane to walk. He also had a cleft palate, and scoliosis – a deformation of the spine, causing it to deviate from its normal position. On top of that, he suffered frequent bouts of malaria, which ultimately claimed his life.

His death, after a ten year reign, offered Egypt’s traditional priesthood the perfect opportunity to obliterate all traces of Akhenaten, Nefertite, and the Amarna period. For example, Tutankhamen’s throne depicts him and his sister-wife Ankhesenamun together. However recent examination has revealed that the depictions had been retouched, with the images altered and repurposed: the throne had originally depicted Akhenaten and Nefertiti. Similarly, recent research has revealed that Ancient Egypt’s most famous artifact, Tutankhamen burial mask, had not been made for him. Giveaways include conspicuously pierced earlobes for earrings, even though Egyptian males, especially male pharaohs, did not wear earrings beyond childhood. Additionally, the gold of the face turns out to be different from the gold of the rest of the mask, and evidence of later soldering is clearly visible. In short, the face staring at us from the golden mask of Tutankhamen is actually not the face of the famous King Tut. Most likely, it is that of Nefertiti.

Indeed, it is now estimated that roughly four fifths of the items found in Tutankhamen’s tomb had originally belonged to Nefertiti. When King Tut died childless, the last member of a dynasty loathed by Egypt’s priests, they simply raided the tombs of Akhenaten’s and his hated wife, Nefertiti, ransacking them for items to dump into Tutankhamen’s tomb. Even the sarcophagus had been built for somebody else. Masons simply carved over and amended its original inscriptions, and repurpposed them for Tutankhamen. It was a demonstration that Egypt was fully restored to its official state religion, centered on the worship of Amun, that the Temple of Karnak was back in business, and that the traditional priesthood had regained its power.

The relative disdain in which contemporaries held Tutankhamen actually ended up inadvertently protecting his tomb. When royal architects of his and later eras excavated new burial tombs for other pharaohs higher up the hill where Tutankhamen was buried, they simply dumped the debris and detritus downhill, and it fortuitously piled up at the entrance to Tutankhamen’s tomb. The teenaged pharaoh was apparently so little regarded that nobody bothered clearing the rubble from in front of his tomb, and it simply sat there, until his burial site was eventually forgotten.

In due course and over the centuries, the tombs of the more important and respected pharaohs were looted by robbers, but that of Tutankhamen, forgotten and concealed by mounds of rubble, remained hidden until it was rediscovered intact, millennia later. It was a lucky break that made Tutankhamen world famous thousands of years later, notwithstanding the dearth of his accomplishments, while far more accomplished pharaohs were relegated to relative oblivion. As one Egyptologist put it: “The pharaoh who in life was one of the least esteemed of Egypt’s Pharoahs has become in death the most renowned“.