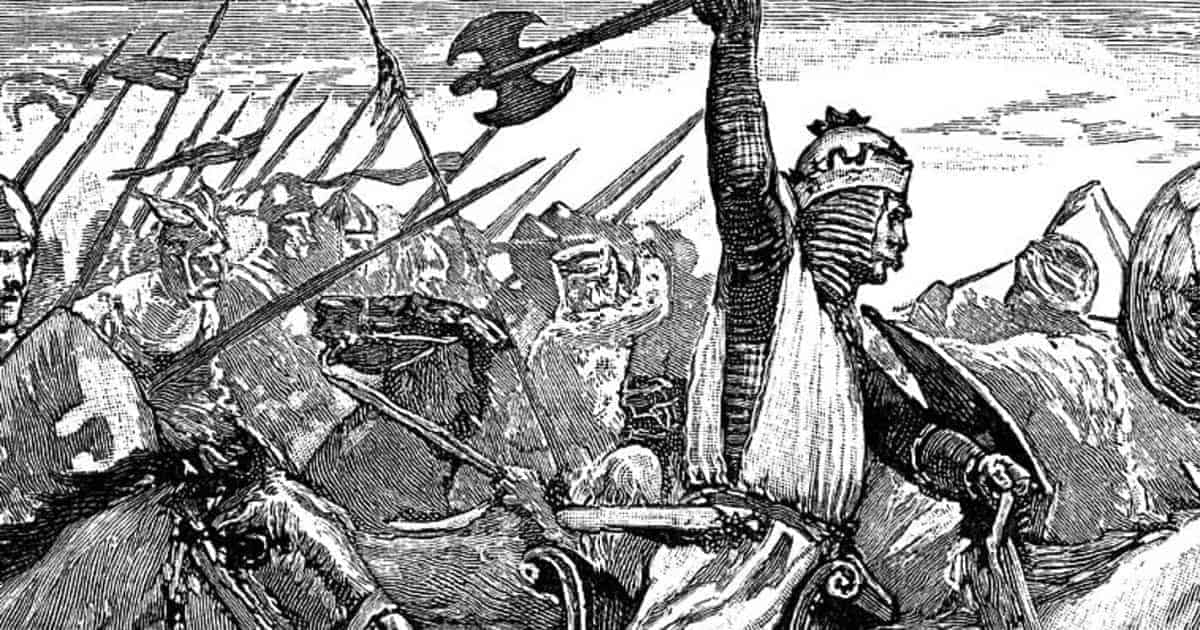 It is no exaggeration to describe the Battle of Tours, which took place on October 10, 732, as one of the single most important battles in European history. The exact location of the battlefield is unknown, but the fight occurred somewhere between Tours and Poitiers. It was a decisive battle in the Umayyad Caliphate’s invasion of Gaul as they were defeated by a combined Kingdom of the Franks force led by the legendary Charles ‘the Hammer’ Martel.

Martel’s victory over his enemy’s forces, led by the Emir of Cordoba, Abdul Rahman Al Ghafiqi, prevented the Muslimization of Western Europe. As well as halting the Islamic conquest, the Frankish win at Tours ensured that Christianity remained the controlling faith in Western Europe. At that time, the Muslim invaders were also busily trying to dismantle the Byzantine Empire in the East. Before we look at the battle, it is important to understand the events leading up to Tours.

The Muslim Invasion of Western Europe

The Umayyad conquest of Hispania began in 711 when Caliph Al-Walid I ordered Tariq ibn Ziyad to launch an invasion. Ziyad’s army disembarked from Gibraltar and began campaigning northwards. The Battle of Guadalete was an early victory, and Ziyad was joined by wali Musa ibn Nusair. The combined armies of both men continued to make inroads into enemy territory, and by 717 they had reached Septimania after crossing the Pyrenees.

A commander by the name of Al-Samh ibn Malik al-Khawlani took over the Arab-Berber forces and captured Barcelona and Narbonne in 719. This marked the beginning of the Umayyad conquest of Gaul. Although the Muslims suffered defeat at the Battle of Toulouse in 721, they retained control of Septimania, and in 725, Anbasa ibn Suhaym Al-Kalbi laid siege to Carcassonne. He forced the city to give tribute, cede half of its territory and make a defensive and offensive alliance with the Muslims.

Uthman ibn Niassa was the commander of the Berber forces, and he became Governor of Cerdanya sometime after the siege of Carcassonne. By this time, the Berber forces were beginning to show a degree of resentment towards the Arab forces. In 731, Niassa allied with Odo of Aquitaine, the victor at the Battle of Toulouse. Niassa killed the Gothic Bishop of Urgell, and Abdul Rahman Al Ghafiqi, the new commander of Cordoba, launched an expedition against Niassa and the usurper was murdered in Cerdanya after being surrounded by Al Ghafiqi’s troops.

Al Ghafiqi then attacked Odo who was still trying to recover after facing Charles Martel. Odo’s forces were defeated by the Muslim commander at the Battle of the River Garonne in 732. Al Ghafiqi ordered his men to move north where they plundered Poitou. At this point, Odo attempted a desperate last gamble by appealing to Martel for help; he warned the Frankish commander about the dangers posed by the invading Muslims. Martel eventually agreed but only after Odo submitted to Frankish rule. The scene was set for one of history’s greatest battles as Martel sought to use the element of surprise to his advantage.

After Martel had agreed to Odo’s request, he set about the task of preparing a professional army. He had assessed the Umayyad’s attack on Aquitaine and realized that inexperienced conscripts wouldn’t be good enough to protect the realm from invasion. Martel angered the religious community by seizing church lands to raise money for his new army, but it was a necessary measure.

There is little doubt that the Muslims underestimated the Franks; this is how they had lost at Toulouse some 11 years earlier. There is nothing written about the military prowess of the Franks in the Arab Chronicles until after the Battle of Tours. The marauding Arabs made a crucial mistake by not scouting northward for possible enemies. Had they done so, they would have known about the military skill of Martel who had established a reputation for excellent command abilities for well over a decade.

Meanwhile, the Umayyad forces had advanced too quickly towards the Loire River which meant they were too far ahead of their supply train. As a consequence, they were forced to live off the land which delayed their assault on the Franks. The Muslims had lost to Odo at Toulouse in 721 because he launched a surprise attack that prevented the Arab cavalry from mobilizing. In later meetings, the Muslims had mobilized their cavalry and easily defeated Odo.

Therefore, Martel’s best chance of victory was to surprise his enemy, and he did so by using secondary roads to intercept the Arab commander Abdul Rahman Al Ghafiqi. Not only did he avoid detection, but he was also able to choose the site of the battle and Martel decided on a high wooden plain. The rationale was to force the Umayyad army to charge uphill through difficult terrain. He cleverly ensured that there were trees in front of his army as a means of reducing the impact of Arab cavalry attacks.

The size of both armies is open for debate. Paul K. Davis claims there were 80,000 Arabs against 30,000 Franks while Victor Davis Hanson believes both armies were equal in size with around 30,000 men each. Most estimates suggest that the Arab army was larger, but Martel eliminated any advantage by surprising his enemy. Indeed, Al Ghafiqi was reportedly so shocked by the size of the enemy army that he delayed battle for a week to decide his next move.

While Martel had succeeded in surprising the Arabs, he elected to avoid attacking them. Perhaps he was waiting for reinforcements or else he hoped that the cold climate would creep up on the enemy. Sure enough, the Umayyad army was not prepared for the winter, so they were forced to attack after seven days of waiting. Martel and his army waited in a phalanx-like formation and invited the enemy on. The fate of Western Europe was in his hands and ‘the Hammer’ would not let the realm down.

Al Ghafiqi attacked his enemy even though he wasn’t sure how large the Frankish force was; the trees obscured his vision. In medieval warfare, cavalry usually defeated infantry but at the Battle of Tours, Martel’s men fended off repeated attacks before the Arabs finally broke through and attempted to kill the Frankish leader. Martel’s personal guard saw the danger and closed ranks to keep their commander protected.

Although Martel’s army was probably outnumbered and contained no heavy cavalry, the men were exceptionally well trained and carried up to 75 pounds of armor into battle. Some of these men had fought with him since 717, and they were able to hold off the vicious assaults of their enemies. At this point, there is a divergence in the chronicles as to what happened next. Arab sources suggest that Frankish scouts started raiding the Muslim supply train and camp which caused the soldiers to retreat and save their plunder. Frankish sources claim that the Franks merely spread a rumor that they were attacking the supply train and this was enough to cause confusion on the battlefield.

Whatever the reason, a significant amount of Muslim cavalry left the field. The infantry misread the situation as a sign of a full retreat and began to flee. Al Ghafiqi tried to stop the retreat but only succeeded in getting himself surrounded by the enemy who executed him on the spot. Martel ordered the resumption of the phalanx formation in the belief that the Arabs would return the following day.

When they failed to appear, the Franks suspected an ambush, so Martel refused to leave his position. Eventually, Frankish soldiers launched a full-scale investigation of the Umayyad camp and discovered that the Arabs had fled during the night, carrying with them as much booty as possible. Europe had been saved, for now.

The Umayyads attempted another invasion of Gaul and launched their raid through Iberia in 735. This second invasion lasted for four years and was arguably more dangerous than the first. However, internal turmoil forced the Umayyads to abandon their quest and return home. The Arabs remained in control of Septimania and Narbonne for over a quarter of a century after Tours but were unable to expand any further.

When the Caliphate embarked on a civil war at the Battle of the Zab in 750, it was only a matter of time before the Arab threat in Western Europe was eliminated. Charles focused on isolating the invaders at Narbonne and Septimania and in 759, his son, Pepin the Short, forced the surrender of Narbonne and the Umayyad dynasty was expelled from the region.

The Arab leader, Al Ghafiqi, made a crucial strategic error by not moving against Martel and by underestimating his army. By doing so, he allowed Martel to choose the battlefield and time of the fight. As the Muslim leader didn’t think the Franks would come to the aid of Aquitaine, he didn’t do a proper assessment of their strength. He also didn’t scout Frankish army movements.

It was also a mistake to waste resources fighting weaker enemies such as Odo when Martel was the real threat. They had needless casualties before Tours and were also burdened by the enormous amount of booty they carried. Martel commanded the situation masterfully and according to Edward Gibbons, had the Frankish leader lost at Tours, the Umayyad Caliphate could easily have conquered a divided Europe.

While modern historians sometimes state that the importance of Tours is overrated, there is no doubt about its impact on Western Europe. According to Henry Hallam, a Frankish defeat at Tours would have meant no Charlemagne, no Holy Roman Empire, and no Papal State establishment; how different would Europe have been then.