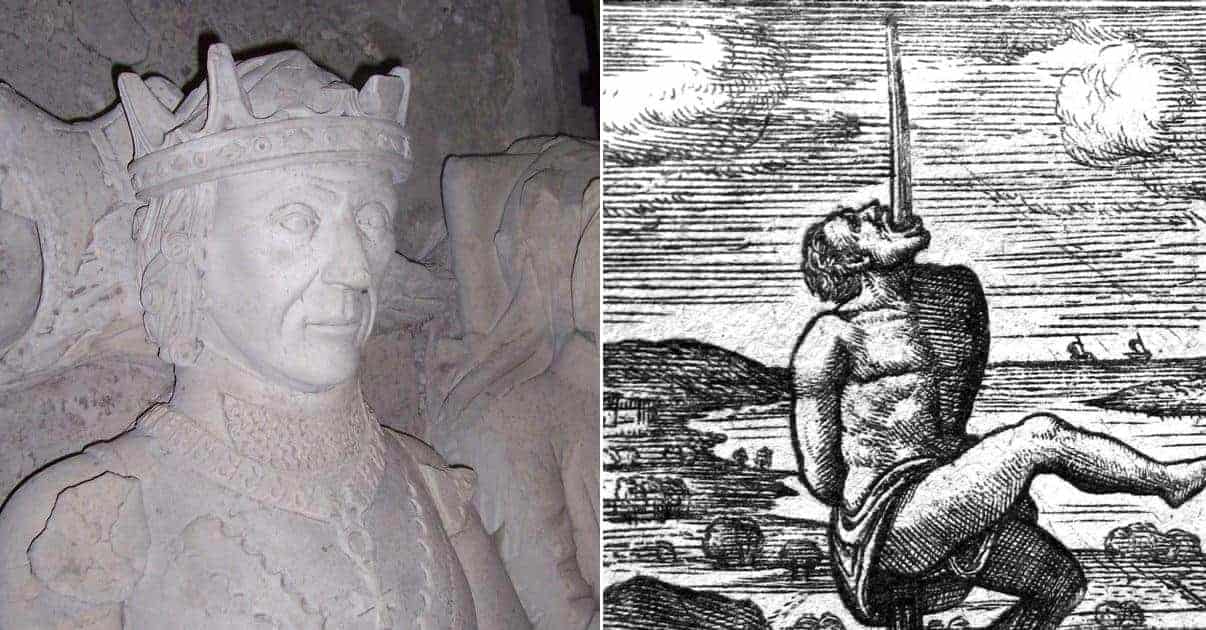 The War of the Roses ranks as one of the most violent periods of English history, during which conspiracies, massacres, and public executions were part of everyday life. For someone to stand out in such a time as being especially heinous is remarkable, but one man has that distinction. He was John Tiptoft, 1st Earl of Worcester (1427-1470), who was notorious for impaling enemies of Edward IV, a punishment unknown in England at the time. His cruelty to his enemies was so appalling that, even during a time of fierce civil war, it drew censure even from his own allies.

And yet, despite this cruel streak, Tiptoft was a quite remarkable man. He came from an esteemed noble family, enjoyed a glittering political career, and was one of the greatest humanist scholars of his day. He travelled Europe in search of learning, translated Cicero, and was a man of great Catholic faith. Although it is hard to forget Tiptoft enthusiastically signing execution warrants and impaling Lancastrian enemies, this is only part of the story. History tells us that nothing is created in a vacuum, and so we must ask how Tiptoft, the embodiment of cruelty and learning, came to be.

John Tiptoft was born on 8th May 1427, the son of John Tiptoft, First Baron Tiptoft (d.1443), a prominent nobleman. The first John Tiptoft was Knight of the Shire for Huntingdonshire and Somerset, Speaker of the House of Commons, Treasurer of the Household, Chief Butler of England, Treasurer of the Exchequer and Seneschal of Landes and Aquitaine. The younger Tiptoft thus grew up in a wealthy household directly involved in the political machinations of the fifteenth-century, a period in which doubts were raised over the suitability, and even legitimacy, of the House of Lancaster to rule.

The House of Lancaster had seized power in 1399, when the unpopular and ineffective King Richard II was toppled by his cousin Henry Bolingbroke, later Henry IV. Bolingbroke spent much of his early reign putting down rebellions after starving Richard to death in Pontefract Castle. His son, Henry V, was an immensely popular figure whose success in France (most notably at the Battle of Agincourt in 1415) united the country, but his untimely death led to his infant son Henry VI taking the throne. Henry VI was a weak king, and so the Lancastrian line was again disputed.

The first John Tiptoft worked closely with all three of these Lancastrian kings, as a diplomat for Henry V and counsellor to the beleaguered Henry VI, and died shortly before the War of the Roses began. In this clandestine and unsettled period the younger John grew up, and as the only son of such an eminent man was expected to follow in his footsteps. He inherited his father’s title when he died in 1443, and was made an Earl merely six years later. By this time, he had begun the education on which his many enemies blamed his bloodthirsty nature.

The Education of John Tiptoft

Tiptoft’s education began in earnest when, aged thirteen, he went to study at University College, Oxford. ‘Univ’, as it is affectionately known, has a claim to be the oldest college at Oxford, being founded in 1249 by William of Durham (a document pertaining to be a foundation deed from the ninth-century Anglo-Saxon king, Alfred the Great, is known to be a forgery). In Tiptoft’s day, Univ only taught theology, which seems to have left a lasting impression on the confusingly-pious Butcher of England. Tiptoft studied at Univ for three years, and shortly after leaving began his political career.

In the same year as being made Earl of Worcester, Tiptoft married Cecily Neville (a Yorkist – an important detail to bear in mind for the next section), who died after only a year of wedlock. He was made Lord High Treasurer in 1452, and then Lord Deputy of Ireland in 1456. The dates of these appointments straddle the first shift in power from Lancaster to York in the War of the Roses, when Richard, Duke of York was made Protector of the Realm after defeating Henry VI in 1455. Tiptoft remained fiercely loyal to the Yorkist cause after this date.

In 1457 and 1459, he was sent on a mission to the Vatican, where Pope Pius II was struck by Tiptoft’s intelligence and intellectual curiosity. After the latter meeting, Tiptoft went on pilgrimage to Jerusalem before spending three years studying in Italy. He chose to continue his education at the University of Padua, which had a far wider curriculum than Univ, being noted for its pioneering work in medicine, astronomy, philosophy, and law. It was also slightly older, having been founded in 1222. At Padua Tiptoft dedicated himself to Greek, Latin, and law, and also visited Ferrara and Florence.

It is owing to his time studying in Italy that Tiptoft has also been dubbed ‘England’s First Renaissance Prince’. The sobriquet, however, is not entirely complimentary. No less an authority than Niccolò Machiavelli called Italy ‘the corrupter of the world’, and Tiptoft’s enemies believed that his egregious cruelty came from his time on the continent. Although clearly a xenophobic charge, it is not beyond the realms of possibility that the skulduggery of late-medieval Italian politics influenced Tiptoft: one has only to consider the fearsome Medici dynasty, with whom he would have been familiar from his time in Florence.

However, we find the most compelling evidence that Tiptoft’s cruelty came from his time in Padua from the Classical texts to which he dedicated himself. Renaissance humanism – which dictated the curriculum at Padua – looked back to the Ancient World for instructions on how to behave and govern in the present. Roman law, in particular, was mercilessly cruel and efficient in order to maintain civilised order. As a student of law, and a known owner of Livy’s Ab Urbe Condita (History of Rome), Tiptoft would doubtless have been familiar with the Romans’ brutal approach to dealing with crime and rebellion.

Tiptoft in the War of the Roses

Armed with his new learning, Tiptoft returned to England in 1461, coinciding with Edward IV of York being crowned King of England. He was immediately awarded the Order of the Garter, and his new expertise in law may have influenced Edward’s decision to elect Tiptoft to Constable of the Tower of London and Lord High Constable. Scholars have long-murmured that Tiptoft’s lengthy absence from England during the early struggles of the War of the Roses was a tactical ploy to avoid the uncertainty at home, perhaps fearing that his change of allegiance in the 1450s would prove his undoing.

Indeed, as the son of a prominent Lancastrian, and a man who had changed his own allegiance to the House of York through marriage and political office, Tiptoft would have feared for his life if the regime failed, and his behaviour whilst Lord High Constable suggests that he was determined to maintain Yorkist power at all costs. In this position, Tiptoft showed no clemency to opponents of Edward IV, and summarily executed almost all of the accused brought before him. He also resorted to torture to uncover Lancastrian plots, his name becoming one of the most feared in the land.

It is worth briefly discussing the offices he held. The Constable of the Tower of London was effectively in charge of defending London, the seat of power in England and to this day the home of the royal family: only the most trusted subject could be honoured with the title. Similarly, to join the Order of the Garter, a group of 24 knights picked solely by the king, signified the sovereign’s acknowledgement of a subject’s loyalty and outstanding military service. In the case of Tiptoft, it can be surmised that his ruthlessness and great learning also helped his cause.

As time passed, Tiptoft grew more cruel. Appointed again as Deputy of Ireland, he executed the Earl of Desmond along with his two infant sons for good measure. The nadir of his cruelty came in 1469, however, when putting down a rebellion led by the Earl of Warwick: ‘[20] persones of gentylmen and yomenne were hangede, drawne, and quartered, and hedede; and after that thei hanged uppe by the leggys, and a stake made scharpe at bothe endes, whereof one ende was putt in att bottokys, and the other ende ther heddes were putt uppe one’.

The cruel spectacle backfired, however, as John Warkworth’s Chronicle continues: ‘the peple of the londe were gretely displesyd’, and in 1470 the usurped Henry VI returned to the throne. Tiptoft was immediately arrested and condemned, and his execution was postponed due to the vast crowds who wished to witness his death. John Tiptoft was beheaded at Tower Hill, London, on 18th October 1470, and begged his executioner to kill him with three strokes to signify the Holy Trinity. 31 books from Tiptoft’s personal collection survive, along with his translations of Cicero’s De amicitia (Concerning Friendship) and Buonaccorso’s Declaration of Nobleness.

Jones, Dan. The Hollow Crown: The Wars of the Roses and the Rise of the Tudors. London: Faber & Faber, 2014.