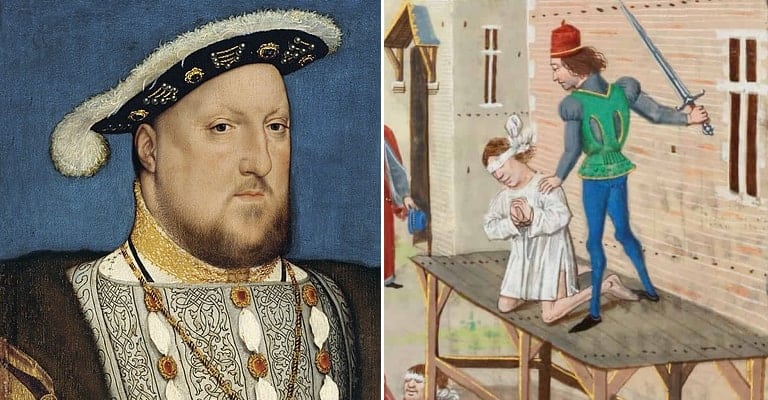 On February 13, 1542, Jane Boleyn, Lady Rochford followed her mistress, Queen Catherine Howard, to the headsman’s bloc. There was a certain irony to Jane’s death. For six years before, she had played a part in sending several others to the block, amongst them, her husband, George Boleyn and George’s sister, Queen Anne. The exact nature of Lady Rochford’s role in the deaths of King Henry VIII’s second wife and his brother-in-law is debatable. Indeed, it did her no lasting harm for Jane Boleyn remained a fixture at court, serving as Lady in Waiting to all three of King Henry’s subsequent wives.

However, Jane’s luck ran out when she became complicit in the adultery of Queen Catherine Howard. She was arrested- and the pressure of the ensuing investigations sent her quite mad. Jane Boleyn’s insanity should have protected her from the block. However, King Henry had the law changed two days before her death, to allow the insane to be executed. This law remained on the statute books until it was repealed by Mary I’s Treason Act of 1554.

While Henry’s unforgiving attitude to those perceived to have betrayed him is well know, he went to an extraordinary length to avenge himself on a woman who was already broken. So what were the crimes of Jane Boleyn? And why did her former brother-in-law go to such lengths to be rid of her?

The Life and ‘Crimes’ of Lady Rochford

Jane Boleyn began life as Jane Parker, the daughter of the wealthy and well connected Henry and Alice Parker of Norfolk. At the age of twelve, after receiving the basic education of a young noblewoman, Jane was sent to the royal court. Although no verifiable portraits of her exist, Jane was reputedly pretty and presentable. Certainly, she did well for herself. At the age of 15, she was an attendant of Queen Katherine of Aragon. Jane was present at the Field of the Cloth of Gold in 1520- and was one of the dancers at the fateful masque where Anne Boleyn first caught Henry VIIIs eye.

In 1526, the Boleyns were on the up due to Henry’s obsession with Anne. Sensing an advantageous match, Jane’s parents organized her marriage to George Boleyn, who in 1529 became Viscount Rochford. Many historians have maintained that the marriage was unhappy, which seemed to be substantiated by the fact that the couple had no children. However, while it may have been a loveless match, there is nothing to suggest that George and Jane Boleyn did not enjoy as cordial a relationship as any other aristocratic couple. Indeed, Jane continued to write to her husband when he was in the Tower after his rest- despite the fact it was she who supposedly betrayed him.

It is Jane’s role in the death of her husband and sister in law that is her most contentious one and that has damned her in the eyes of history. The popular version of events sets Jane up as Cromwell’s star witness against the pair, for Jane was the supposed source of the stories of incest that damned Anne and George. Some people even believed it at the time. The poet Thomas Wyatt, a friend of Anne Boleyn reputedly called Jane a “wicked wife, accuser of her own husband, even to the seeking of his own blood.”

Jane was supposedly motivated to betray those closest two her by her desire to be rid of a cold, possibly abusive husband and the sister in law she hated. Yet there is evidence that she and Anne were close. Anne confided secrets of the royal bedchamber to her sister in law. And when Henry began an affair not long after their marriage, Jane conspired with Anne to have the woman banished from court- a scheme that earned her several months’ banishment herself once Henry found out!

After the deaths of Anne and George, Jane lost some of her lands and titles and had to rely on her father in law Thomas Boleyn for financial support. However, she was soon back at court as Lady in waiting to Jane Seymour. Jane also served Henry’s next wife, Anne of Cleaves and supplied the crucial evidence of the nonconsummation of the marriage. Then, in 1540, Jane was appointed Lady in Waiting to the Queen who was her downfall, Catherine Howard. In 1541, she helped facilitate and cover up the young Queen’s affair with Thomas Culpepper, one of Henry’s gentlemen. In 1541, the affair was discovered and Jane, along with Catherine was arrested.

The Law of Insanity.

On November 14, 1541, Jane Boleyn entered the Tower of London. She quickly realized that her position was hopeless. Archbishop Cranmer, who was in charge of her interrogation presented her with a letter written to Thomas Culpepper in Queen Catherine’s hand. “Come when my Lady Rochford is here, for then I shall be at leisure to be at your commandment, ” read one line of the letter. It was irrefutable proof that Jane was involved in the affair. All was lost, and Jane knew it. After just three days in the Tower, she suffered a breakdown and was “seized by a fit of madness (frenesi) by which her brain was affected, ” as the imperial ambassador Chapuys put it.

Her mind broken, Jane was released into the custody and care of the Lord Admiral’s wife, Anne Russell. Since the fourteenth century, English law specifically prohibited anyone certified insane from standing trial, let alone executed. This included anyone who had gone mad after the event. Instead, most lunatics not deemed a threat to society were allowed to return home or else imprisoned until the monarch pardoned them.

There were several reasons for this. Firstly, a felon was supposed to feel their punishment. However, if a person was insane, they were unlikely to appreciate their castigation. Secondly, a criminal had to have a mensa rea- a guilty mind. In other words, they had to have knowingly have committed a crime. An insane person could not have a mensa rea because they were not in control of their actions. However, crucially, English law regarded any person who was mad to have already been punished by nature of furiosus solo fitrere punitur. In other words “a madman is punished by his madness alone.”

Henry sent his own physicians to assess the state of Lady Rochford’s mind and determine if there was any chance of her regaining her sanity so that “he [the king] may afterward have her executed as an example.” The news was not good. The physicians declared there was little chance Jane Boleyn would make a full recovery.

However, Henry was determined that Jane should die. So, on February 9, 1542, Jane was removed from the care of Anne Russell and taken back to the Tower. In the meantime, the King was busy pushing a bill of attainder through parliament that declared Jane and the Queen guilty of treason without a trial. At the same time, Henry also pushed through a new act of parliament that which allowed “a person becoming insane after the supposed commission of treason, might be tried, or losing his rational faculties after attainder, might be executed.”

Why Did Jane Boleyn have to Die?

On February 13, 1542, Jane Boleyn was beheaded on Tower Green, just after Catherine Howard. Despite her madness, she was composed at the time of her death. As was customary, she prayed for the king and apologized for her ‘many sins”. According to Ottwell Johnson, a merchant who saw both executions, both the Queen and her lady made such a good end that “their souls [must] be with God, for they made the most godly and Christian end.”Jane’s head was removed with a single blow of the ax. She was buried in the Church of St Peter ad Vincula- not far from her sister in law, Anne Boleyn and her husband George.

The Act of Attainer, which led to Jane Boleyn’s execution, not only ended her life; it also destroyed her reputation. For it branded Lady Rochford a “bawd’– in other words, a brothel madame and so implied that she had corrupted her mistress. Henry VIII was not known for being merciful to those who crossed him. But why was it not enough for him that Jane Boleyn should lose her mind and her reputation? Why did she also have to lose her life?

Jane’s fate seems particularly harsh in light of the ‘services’ she rendered Henry regarding unwanted wives. However, Jane may not have been as ‘useful’ as accepted history would have us believe. For although she did provide evidence in the annulment of the Cleave marriage, the part she played in the downfall of Anne Boleyn has been overplayed at best. Nowhere in the trial documents is Jane named as a witness. Chapuys mentioned that there was a woman who gave evidence regarding the Queen’s incest with her brother. However, he did not name her- a strange omission if she was the sister in law of the Queen.

There was only one piece of information that Jane Boleyn is known with certainty to have supplied to Cromwell. Terrified by the implications of the fall of the Boleyns to her own person, Jane was desperate to provide something, anything to prove her loyalty to the King. So she betrayed Anne Boleyn’s confidence by passing on a piece of very private information regarding the state of relations in the royal bedchamber. Jane told Cromwell that Anne had confided in her that although Henry was still capable of sex, it took him a long time to rise to the occasion. Indiscrete perhaps. But hardly enough to condemn Anne for treason.

In truth, Henry VIII had Jane Boleyn executed because he had been made to look a fool. His wife had been unfaithful to him under his very nose- and Jane had helped her. It would not have occurred to Henry that Jane’s position was impossible. There was no way she could have informed on the Queen without hard evidence and escaped Henry’s wrath. Not could she refuse Catherine her aid. However, this aside perhaps Henry was afraid of something else. For Jane had kept royal secrets well enough when sane. But what would she reveal with the balance of her mind disturbed? Jane Boleyn’s madness might have been enough to salve Henry’s wounded pride- if she had not been privy to so many secrets.

Henry VIII Made It Legal To Execute Insane People So He Could Cut Off His Sister-In-Law’s Head, Genevieve Carlton, Ranker.com.

How many executions was Henry VIII responsible for? History Extra, December 28, 2014