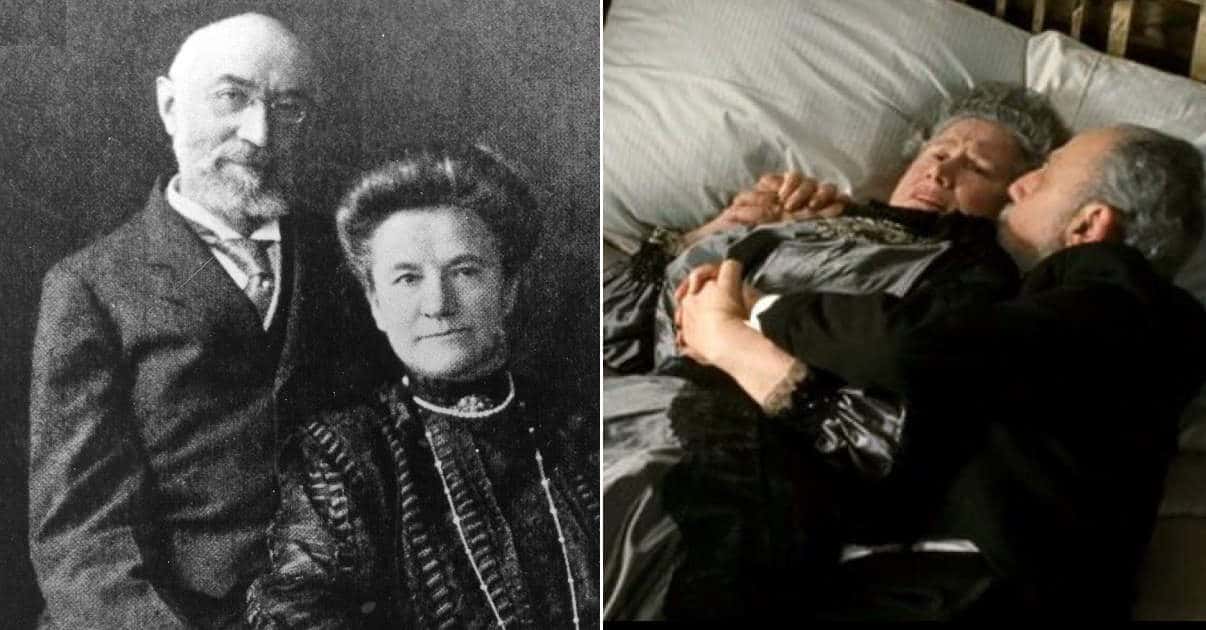 Among the pandemonium on deck in Titanic‘s final moments, the Strauses’ last movements (and those of Isidor’s manservant John Farthing) are lost to history. The final eyewitness report came from the Washington DC-based writer, Helen Churchill Candee. As she was being rowed away from the foundering giant, she remembered Mr. and Mrs. Straus standing on the upper deck. The fact that Isidor’s body was recovered from the water by the Mackay-Bennett the day after the disaster suggests he did remain on deck until the end. Ida’s body, however, was never found.

When the Carpathia docked in New York on April 18, Helen Candee was amongst the first to share what she had seen with reporters. She was, therefore, instrumental in establishing and circulating the Straus story. But she wasn’t alone. Amongst others, Colonel Archibald Gracie confirmed Candee’s version of events. He testified before the Senate Inquiry Committee that he had seen the Strauses discussing how if they were going to die, they would die together. Gracie also reports that he and a number of others did their best to change Ida’s mind, but that she would not be moved from her husband’s side.

Ida’s decision to stay with her husband was one of the biggest stories to emerge from the Titanic disaster. Curiously, this was particularly the case in the United States, where accounts of heroic women as well as heroic men were given considerable airtime (unlike in Britain where the focus was almost entirely on the men). Ida came to the fore as an exemplary woman; an embodiment of wifely virtue and loyalty in an age of failing marriages and higher divorce rates. As the New Orleans Times-Picayune reported:

“In this day of frequent and scandalous divorce, when the marriage tie once held so sacred is all too lightly regarded, the wifely devotion and love of Mrs. Straus for her partner of a lifetime stands out in noble contrast.”

Isidor was buried in New York at Woodlawn Cemetery, the Bronx, a memorial to Ida affixed to his grave, while in Straus Park at Broadway and 106th Street stands a memorial statue reading: “Lovely and pleasant were they in their lives, and in their death, they were not parted”. But this isn’t where their story ends. As you’ll remember, Rosalie refused to take up her place in the lifeboat, offering it instead to Ellen Bird. In the true sense of self-sacrifice, she died so another could live. And live life she did.

She immediately set about seeking out the Strauses’ eldest child, Sara Straus Hess, so she could return the fur coat Ida had given her. Sara insisted that it had been given to her, however, and she should keep it. Ellen soon found employment with another affluent family who had also been aboard the Titanic, the Speddens of Tuxedo Park, New York. She worked for them until her marriage to Julian Edward Beattie, an English-born hotelier in June 1914.

They had a daughter together, Gwendolyn, but tragically she never made it to her third birthday. Ellen and Julian had no more children together after Gwendolyn’s death. Instead, she worked for a series of families, and he for a series of businesses in the hospitality trade, travelling from New Jersey to Boston, Rhode Island, and New Bedford, Massachusetts. She died in 1949 and was buried in Bristol, Massachusetts. Her husband was buried beside her when he died 10 years later.