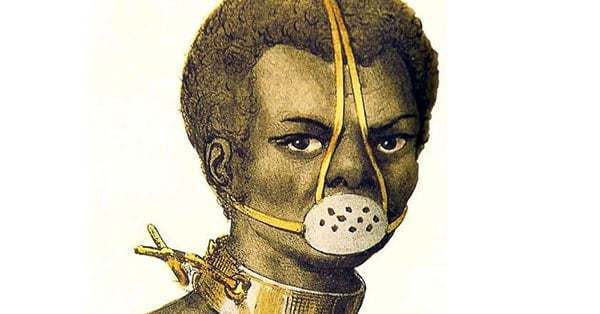 Slavery was not abolished in Brazil until 1888. In the late nineteenth and early twentieth century, reports arose of black Brazilians reverencing the image of a woman in the sort of punishment mask Anastacia was subjected to. The poor of Rio and the descendants of its slaves continued to draw strength from her fortitude. But the cult of this mysterious woman- if there truly was one- was not widely known.

But the discovery of the painting of Anastasia in the Church of Rosario gave the legend a new impetuous. An exhibition was mounted at the Museum of the Negro, which was set up in an annex of the church, to commemorate the 80th anniversary of the abolition of slavery. The portrait, which had now been identified as Anastasia was given center stage.

This was the moment the Cult of St Anastasia was truly born. The Umbanda Religion, which blends native Brazilian, Roman Catholic and spiritist beliefs embraced Anastacia as one of the “old black slaves”, people who died enslaved but who as spirits encapsulated kindness and compassion.

Anastacia’s stories blossomed and began to be gathered and written down and her influence spread By the 1980s, she was even being venerated by the white middle classes. By 1984, the oil company Petrobras funded a campaign to have her officially canonized by the Catholic Church.

But, despite the fact the portrait was discovered in the back of one of their churches, the Catholic Church denied St Anastacia ever existed. In 1987, they declared she was unverifiable and so never existed. There would be no sainthood. Anastacia’s image was removed from churches.

But her cult did not die out. Independent shrines, such as that of Vas Lobo in Rio began to spring up. Small images of the saint, lit by candles were venerated by worshippers who left medallions and prayer cards as offerings to their favored saint.

St Anastacia’s cult shows no sign of slowing and today she has a following of 28 million. For the poor, white and black in Rio, as well as nurses and prisoners, she is a symbol of hope and compassion.

But did she ever exist?

Element’s of Anastacia’s life does indeed ring true. Slave women were indeed abused by their owners and the birth of a blue-eyed slave girl, while unusual would not have been impossible.

It seems that the masking of slaves was common in Portuguese Brazil. In his “Brazil. Entitled Life in Brazil; or, A Journal of a Visit to the Land of the Cocoa and the Palm,” Anglo-American scientist Thomas Ewbank described how Brazilian slaves were often hidden behind iron masks which were especially used as punishments for those who were troublesome. But the slave portrayed by Arago was not a woman, but a man according to the artist himself.

Perhaps the best way of seeing St Anastacia is not as an outright fiction but as a hybrid of numerous lost, nameless individuals who suffered in the ways of this unofficial saint – and yet maintained their humanity.

Simone Schwarz-Bart in her “Hommage à la femme noir” recounts how Anastacia was born in Angola. Once enslaved, she was sexually abused by her master and became pregnant. She was then sent to a plantation where she had several more children by different fathers. Abused by overseers and reduced to becoming a field slave, she was initiated into the Candomble or ‘dance in honor of the gods‘ an Afro-Brazilian tradition. She then tried to escape and was recaptured, beaten and fitted with an iron mask to keep her from speaking before her death from her depredations.

This story, probably fictional, best epitomizes not only Saint Anastasia but those she represents: the bonded, the abused, the rebels who will not be silent and will not give up hope no matter what they face- and yet, in the face of suffering, never relinquish their dignity, compassion, and humanity. No wonder Escrava Anastacia is still popular in the Rio of today.

The Vintage News – The Legend Of The Martyred St. Escrava Anastacia, The Beautiful Slave Girl Who Was Forced To Wear A Face Mask

Face2Face Africa – For Her Beauty, Anastacia Escrava Was Forced To Wear An Iron Muzzle All Her Life In Brazil

Thomas Ewbank – Life in Brazil, Or A Journal of a Visit to the Land of the Cocoa and the Palm

Ancient Origins – Candomble: The African-Brazilian Dance in Honor of the Gods