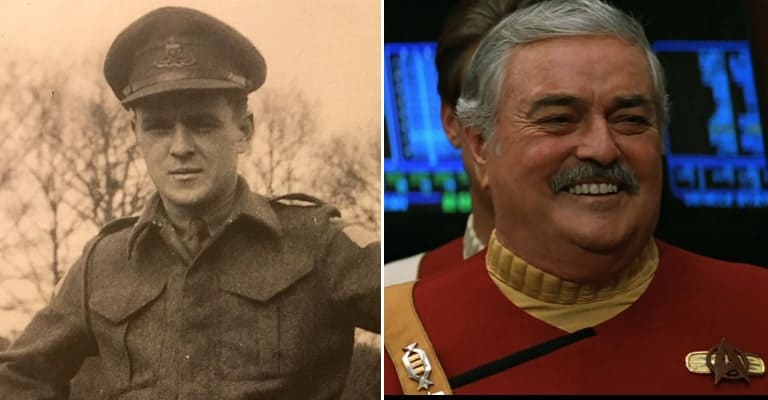 Intense Allied aerial attacks in the runup to D-Day wreaked havoc on German infrastructure, road and rail transport, and communications hubs throughout Normandy and Northern France. However, bombing proved largely ineffective against the actual defenders on the beaches targeted for amphibious attacks on June 6th, and left them mostly unscathed. The first wave of Canadians to disembark were mowed down by Germans firing from heavily fortified and well situated positions overlooking the beach.

The attackers were temporarily pinned down by intense fire, and their advance came to a halt until they were saved by the timely intervention of a British cruiser, HMS Ajax. The Ajax’s guns blasted the defenders and wrecked their positions from what amounted to point blank range for naval fire, long enough for the Canadians to move inland. Doohan led his men over the wet sands, which were strewn with antitank mines that luckily did not go off because the men did not weigh enough to trigger them.

His unit was tasked with securing the Caen-Bayeux road, and with capturing an airport west of Caen, a key city whose capture would bedevil the Allies for a considerable time to come. As Doohan’s unit made its way off Juno Beach and to higher ground inland, he came across and personally killed a pair of German snipers. Despite the early difficulties on the beach that morning, he and his men managed to secure their assigned D-Day objectives by noon of June 6th.

However, chaos reigned on the landing beaches behind them, as reinforcements and follow up units arrived faster than the beach masters, tasked with directing them to their destinations, could handle them. Soon, there was a huge snarl on the beaches and throughout much of the ground recently liberated by the Allies, as different units were jammed next to and mixed with each other. It was not just messy, but also dangerous. Without well defined unit boundaries, jittery troops, many of them experiencing combat for the first time, were liable to shoot up their comrades, mistaking them for Germans. Doohan would experience that firsthand.

Around 11:30PM on D-Day, Doohan was making his way to a command post, when a nervous Canadian sentry opened up on him with a burst from a Bren gun. He was struck by six bullets, four of them hitting his legs, one striking his chest, and one shooting off the middle finger of his right hand. It could have been worse: the bullet that hit him in the chest was deflected by a silver cigarette case, a gift from his brother. As Doohan joked about it in later years, smoking had actually saved his life. It was no joking matter at the time, however, as he writhed in pain while being rushed to a hospital to get his wounds treated.

From Fighting to Fame

After recovering from his injuries, Doohan signed up for pilot training to fly an artillery observer aircraft. After getting his wings, he was assigned to fly a Taylorcraft Auster Mark V plane for No. 666 Aerial Observation Post Squadron, and served in that billet until war’s end. Although he was technically not a member of the Royal Canadian Air Force, Doohan earned a reputation as “the craziest pilot in the Canadian Air Force“. Among other things, he once got in serious trouble for slaloming his plane between telegraph posts, just “to prove it could be done“.

Back home after the war, Doohan resumed his technical education, but after hearing crappy voice acting in a radio drama, he figured he could do better. He turned out to be right, helped in no small part by a talent for doing accents that he had since childhood. So Doohan went to a drama school in Toronto, then earned a scholarship to study drama in New York City. By 1946, he had secured several radio roles with the Canadian Broadcasting Corporation (CBC). Over the next few years, he shuttled between Toronto and NYC as work demanded, eventually performing in what he estimated to have about 4000 radio gigs, and 450 TV ones.

By the 1960s, he was making regular appearances on TV, with credits including The Twilight Zone, Bonanza, Bewitched, The Fugitive, The Outer Limits, and Hazel. His big break came when he auditioned for the role of chief engineer in Star Trek, and producer Gene Rodenberry asked him what accent best suited the role. “If you want an engineer, in my experience the best engineers are Scottsmen“, was Doohan’s reply.

Doohan was cast as the Enterprise’s engineer in the series’ second pilot, Where No Man Has Gone Before, with the name Montgomery “Scotty” Scott, after the actor’s grandfather. Scotty spoke in an Aberdeen accent that Doohan had once heard, but he almost ended up cut from the show after Rodenberry had second thoughts, and wrote to tell him : “We don’t think we need an engineer in the series“. The character remained only after Doohan’s agent intervened.

Scotty became one of Star Trek’s defining characters, with a depth of technical savvy that frequently allowed him to come up with creative and unconventional fixes to solve seemingly insurmountable problems. He frequently bridged the gap between Captain Kirk’s ambitious plans and his ship’s capabilities, encapsulated by the iconic phrases: “I’m giving it all she’s got, captain! She can’nae take any more!” Moreover, with an identity strongly connected to the Enterprise, Scotty brought the inanimate ship to life as a character in of its own right.

By the third season, Rodenberry was glad that he had kept him in the show, writing in a memo that Doohan was: “capable of handling everything we throw at him“, and praising “the dour Scott“. After the series ended, however, Doohan discovered that rather than furthering his career, his successful role as Scotty had typecast him, and he had difficulty getting different roles. He eventually accepted that he would “always be Scotty“, and made a living from personal appearances – one of the few cast members who actually enjoyed meeting fans and talking about the Star Trek days. He lived to age 85, dying in 2005 from pulmonary fibrosis, caused by exposure to harmful substances in WWII.