How the World Will End, According to the Aztecs 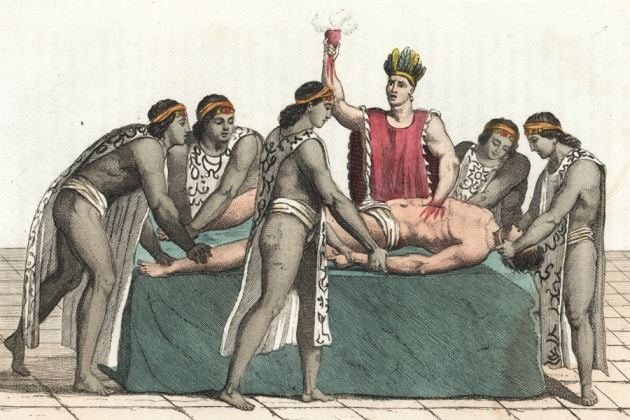 How the World Will End, According to the Aztecs

The honor of the fourth sun was given to Chalchiuhtlicue, who was also the new wife of Tlaloc. She was a loving god and very kind toward the people. Texcatlipoca did not like her kindness on the people and told the goddess that she was not truly loving and only faked it in order to get praise. This greatly upset Chalchiuhtlicue and she cried blood for 52 years. This caused a flood that wiped out the Earth and only the fish, and those that managed to become fish survived.

Quetzalcoatl could not take the death of the people one more time and therefore he traveled down to the underworld. He stole their bones back and dipped them into his own blood in order to bring them back to life. The fifth and final sun was now Huitzilopochtli and the Aztec people were desperate to prevent another end of the world. In this world, the stars, known as Tzitzimitl, remain jealous of their brother Huitzilopochtli for being the brighter as the sun. So, every night, led by the moon, they launch an attack on Huitzilopochtli but are beaten back each morning.

To give Huitzilopochtli strength and to avoid the judgement of Tezcatlipoca, the Aztecs performed brutal sacrifices. To honor Quetzalcoatl for saving them they do blood sacrifices for Quetzalcoatl dislikes the death of his people. There were sacrifices made to honor all the gods, for the seasons and to ask for rain or strength in battle. The Aztecs believed that if they failed to please the Gods for any reason, namely with the stopping of sacrifices, that the world would go black and Tzitzimitl would slay Huitzilopochtli and the rest of humanity. Then a catastrophic earthquake would shatter the world completely.

There are variations of all these myths across regions and people that lived under Aztec rule. However, this version of the myth seems to be the most common and the least contradictory of the myths. The other variations change the identity Ometeotl or the identity of the fifth sun god, but the method of destruction for each sun stays the same.

The Aztec belief in the five suns was central to their beliefs, and as such each ruler would be given a sun stone. The sun stone depicted each of the four previous suns around a center face representing the current sun. A sun stone with a date of 1427 was found to be the stone that legitimized the rule of Izcoatl. The stone would have been kept on ground and some believed anointed with the blood of sacrifices in order to secure the rule of the leader and prevent the destruction of the fifth sun. While some refer to sun stones as calendar stones because they feature depictions of the 20 Aztec day names, they do not function as a calendar. This means there is no exact date for when the Aztecs believed the world would end, just that it would end at the will of the gods.