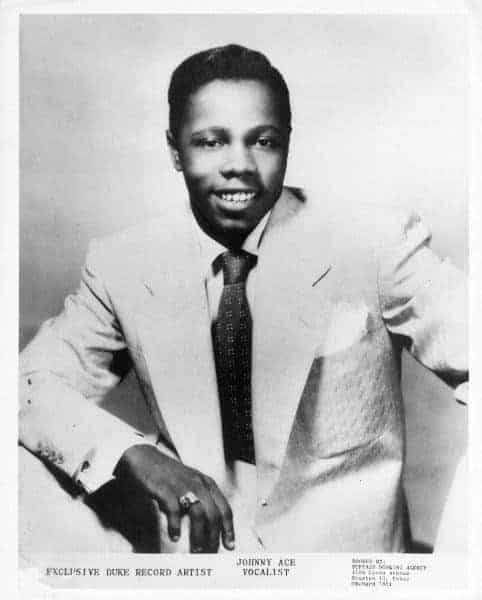 John Marshall Alexander Jr. a.ka. “Johnny Ace” was a rhythm-and-blues singer in the 1950s. He was born in Memphis, Tennessee and was the song of a preacher. For a time, he served the U.S. Navy during the Korean War but after his service, he decided to focus on his music. He joined Adolph Duncan’s band as pianist and then later the B.B. King band with Bobby Bland. When Bobby Bland joined the army, the B.B. King band headed for Los Angeles. With the loss of their singer, Johnny Ace took over singing for the band and renamed the band the Beale Streeters. Johnny also took over the King’s radio show on WDIA.

He later took on the name Johnny Ace and signed to Duke Records in 1952 at the age of 22. His very first song “My Song” topped the R&B chart for nine weeks in September 1952. It would later be covered by Aretha Franklin. With the success of his first single, he started touring all over, many times with Willie Mae Thornton. For two years his career only grew in success with 8 hits in a row it seemed like he could do no wrong. He was named the Most Programmed Artist of 1954 according to a poll of disc jockeys conducted by Cash Box.

In 1955, it was announced that three of his 1954 recordings along with Thornton’s Hound Dog sold 175,000 copies. And his song “Pledging All my Love” was a number 1 hit for 10 weeks and has been widely recorded by artists like Elvis Presley and David Allen Coe. But Johnny Ace never saw the success of this song as it was released after his death.

Read on to see just what caused the famous singer to utter his famous last words.

Johnny Ace was performing at the City Auditorium in Houston, Texas. It was Christmas day and during a break with his bandmates, he began playing with a .22 caliber revolver. This was not uncommon for Johnny Ace as he often played with his gun and would shoot roadside signs while they were driving from place to place. The group was in a happy mood and Johnny Ace had even bought himself a new 1955 Oldsmobile just an hour earlier.

Johnny Ace was pointing the gun around the room, even at his girlfriend and another woman. He was told to be careful with it. Johnny Ace was cocky and laughed at the concern. He said that he knew which chamber was loaded and which was empty. He held the gun up to his head and said “It’s okay! Gun’s not loadedâ€¦see?” Unfortunately, what the people saw was the bullet entering the side of his head and killing the young singer.

The funeral for Johnny Ace was held on January 2nd, 1955. An estimated 5,000 people attended the funeral and the singer was buried in his hometown of Memphis, Tennessee. After his death, people clamored for his music and “Pledging My Love” was released after his death on February 12th, 1955. All of his singles were then released as a full album called The Johnny Ace Memorial Album.

After his death, numerous singers have written tributes and songs that tell the story of the famed R&B singer who killed himself on Christmas Day.