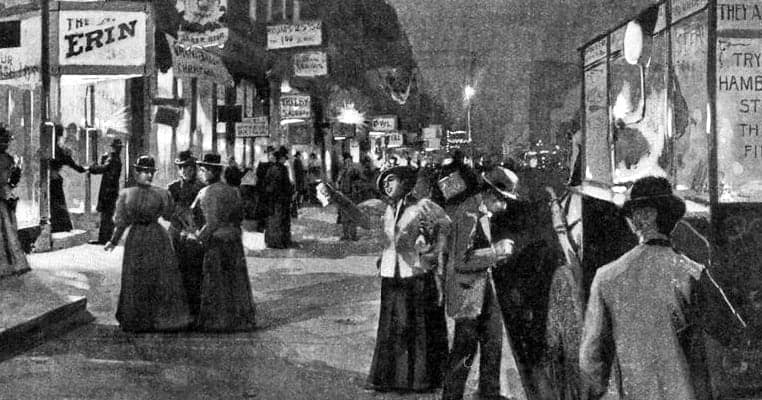 The most famous brothel in the world stood at 2131 and 2133 South Dearborn Street in Chicago. Ada and Minna Everleigh purchased the adjoined buildings and created a business whose sole purpose was to provide sensual pleasure. They were very successful. Along the way they challenged the social construct of what it meant to be a business woman and a prostitute in the first decade of the 20th century. The sisters believed that all women knew how to sexually pleasure and men wanted nothing more than to be pleasured. Lucky for them, men would willingly hand over hundreds of dollars for the kind of pleasure that they were selling.

The Everleigh sisters demanded decorum from their harlots, household staff, and their clients. They were quick to remove a patron who got too drunk, did too much opium, or got violent. The sisters knew they relied upon the married men and they had to provide them with the pleasures that their wives would never dare to do in Victorian Chicago. This is the story of the most exclusive club that had men falling down to get in and women lining up to be “butterflies.”

Lounging on one of George Pullman’s Palace Car Company sleeping cars, Minna and Ada Everleigh eagerly awaited their arrival into Chicago. The sisters had left Omaha, Nebraska following the success of the Trans-Mississippi and International Exposition where manufactures showed off their latest technological inventions. The pursuit of wealth and self-fulfillment spread over the nation like a plague on the eve of the 20th century. Minna and Ada were determined to offer men pleasures at prices that would make them extremely wealthy.

The sisters were born into a prominent slave-holding family in Virginia. Ada was the oldest born in February 1864 and Minna was born in July 1866. In the years following the Civil War, the family had lost their slaves and plantation and were in a reduced financial state. Both Ada and Minna married but soon divorced and left Virginia. By 1895 the sisters had settled in Omaha and managed a brothel as madams. This was the true story that they never discussed. For them, pleasure required creating a story, so the sisters sat in their train car and made up their past.

Ada and Minna spoke with admiration of their father, a lawyer that had fled Virginia when the turncoat British officer, Benedict Arnold invaded in 1781. The girls were born in 1876 and told of a wonderful childhood of finishing schools and debutante balls. When the girls were 17 they married brothers by the last name of Lester. As it turned out, they insisted, the brothers were abusive and their marriages failed. Their father died in the late 1890s and left the sisters with $35,000. Traveling with an acting troupe, the sisters were accidentally left behind in Omaha. They did not have enough money to leave, so they stayed working as prostitutes to make money to leave.

In reality, the sisters were madams at an Omaha brothel. Omaha was full of activity as men prepared the city for the 1898 World’s Fair. For Ada and Minna, Omaha was small potatoes. They wanted a larger and wealthier clientele so they decided to leave Nebraska a year before the fair opened. The sisters wanted to provide a respectable place for men to enjoy sexual pleasures without “offending the fragile sensibilities of their wives.” Over the next year, the sisters traveled to red-light districts and took notes.

They met with madams in New Orleans, San Francisco, Pittsburg, Washington DC, New York, St. Louis, Memphis, and many other cities. Each madam had her own niche that men found irresistible. The sisters jotted down their ideas, discussed them, and then worked on how they would turn their ideas into reality. During a conversation with a madam in New Orleans, they were reminded of how fast Chicago was growing. There the sisters would find the men that would make the Everleigh Sisters a household name.

“An amusing city, Chicago, any way you look at it.”

Chicago had been the fastest-growing metropolis in America during the last decade of the 19th century. In fact, until New York combined all of its independent boroughs in 1899, Chicago was the largest city in the nation. Men, women, and children flocked to Chicago from overseas and from farms arriving in one of eight railroad stations seeking their fortunes that the city’s promoters promised was available to everyone. Factories belched thick smoke while laborers turned raw materials into consumer products. Workers in the mile-long six story high Montgomery Ward warehouse, the amazon.com of its day, wore roller skates to fulfill orders in an efficient manner.

The pursuit of happiness and money drove the city. Men and women had plenty of places where they could spend their hard-earned cash. At Marshall Fields’ store the customer was always right and his mantra was “give the lady what she wants.” Potter Palmer built an opulent hotel, the Palmer House, with gold-leaf trim where men could order a steak where just hours earlier the cattle was in a holding pin of the Union Stockyards. The L (elevated train) permitted people to cross town without ever stepping on the sidewalk!

As with most cities, Chicago had a “segregated” district. City leaders believed that prostitution was going to happen, but it was better to contain it within a segregated district than to permit it in respectable neighborhoods. Chicago’s vice district was the Levee on the city’s near-south side. If there was a show, person, or item that would give a person pleasure, it was readily available for a price in the Levee. Almost all of the activity that was available for purchase in the Levee was controlled by Ward Bosses. Brothels, saloons, and clubs paid protection money as to not be arrested for providing sensual pleasures that were illegal.

Ada and Minna gave a nod to their grandmother who signed her letters with “everly yours.” As soon as the sisters stepped foot in Chicago they became the Everleigh sisters and their first order of business was to secure a building for their business. They set out to speak with Effie Hankins, a madam seeking to retire and sell her brothel and adjoined building. The place was perfect and the Everleigh sisters became Chicago property owners.

“I’m afraid we are in for the time of our lives.”

The 3-story mansions on South Dearborn Street contained 50 rooms. As the sisters made plans for their new business venture, they traveled all around Chicago in their black carriage. They med the competitions, they knew who and where the city’s wealthiest men lived and the name of their wives, and charmed politicians and ward bosses. They hired black porters that would open doors for the gentlemen who entered paradise. The kitchen staff was superior to anywhere in the city and served the best food in Chicago. The sisters created a theme for each room in their club. The Gold Room contained a custom-made gold piano, the Mirror Room contained 1000 mirrors, and the Red Room was filled with red sofas, wallpaper, and silk curtains.

Pleasure was the name of the game. Ada and Minna did not hire any widows or amateurs to work in their club. They wanted girls that were experienced, had a “pretty face and figure,” were in perfect health, and looked stunning in couture gowns. The “Butterflies,” as the harlots were called, were educated in sensuality, philosophy, and lady-like manners that would put the Queen of England to shame. Each evening Minna told her Butterflies that it was their job to “amuse the men in ways that they had never been amused before” and to be proud that they worked at the Everleigh Club.

Without fanfare or publicity, the Everleigh Club opened its doors on Thursday, 1 February 1900 at 8 pm. Minna stood at the door to ensure that the men who sought entrance could afford the $50 minimum required to go through the threshold. That first night, the Club cleared $1000 meaning each Butterfly could easily pocket $100 per week. A salary far above the $6-8 per week at a brothel down the street.

Progressive reformers fought hard to shut down the Levee District. For over a decade reformers had professed the horrors of the white slave trade where young women were kidnapped, drugged, raped, and forced into a life of prostitution where they would soon die from neglect and abuse. This was not how Ada and Minna operated, yet they had no choice but to shutter their club in October 1911 when the reformers had succeeded in shutting down the Levee. The sisters were ridiculed for their participation in the world’s oldest profession and left Chicago with the millions that they had made. Minna Everleigh died in New York in 1948 and her sister Ada died in Charlottesville in 1960.

Miller, Donald L. City of the Century: The Epic of Chicago and the Making of America. New York: Simon & Schuster Paperbacks, 1996.