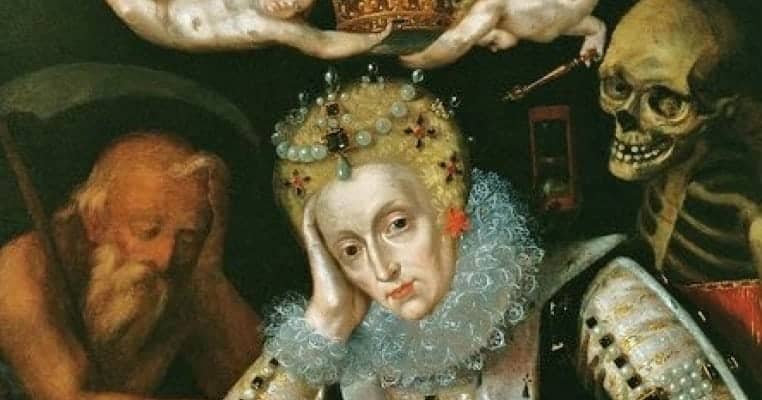 3. FACT: Elizabeth had a fascination with the occult and even invited astrologers and seers into her inner circle

Elizabeth I may have been a well-educated lady with a keen interest in science, but she also had a fascination with the occult and magic. By the standards of the 16th century, however, this was perfectly normal. At that time, there was no contradiction between having a scientific mind and a passion for reason and at the same time placing faith in astrology. However, Elizabeth was unique among English monarchs in that she surrounded herself with mystics and self-proclaimed seers. Chief among them was John Dee. The most famous occultist of the age, Dee was personally invited to the royal court by Elizabeth. She read his key work, Monas Hieroglyphica, and wanted him to explain it to her personally.

Dee was by no means the only practitioner of magic or astrology in Elizabeth’s close circle. She would regularly welcome visiting occultists to her palace, granting them an audience and allowing them to read her star charts or try and predict her future. Notably, such was her faith in astrology that she even ruled that she was to be officially crowned Queen of England on 15 January 1559, a date specifically chosen for her by Dee. At the same time, however, Elizabeth was a devout Christian and helped place the Protestant Church at the heart of the English state.

2. FACT: Elizabeth was vain and her determination to stay beautiful became more intense as the years passed

Queen Elizabeth might have been well-educated and highly intelligent, but she also possessed great pride in her appearance. How other people thought she looked mattered a lot to the monarch. As a young woman, she didn’t need to make much of an effort to impress. According to the accounts of the time, Elizabeth was one of the most-desirable young ladies in all of Europe, and not just due to her social status and wealth. However, as the years passed and her youthful beauty began to fade, the Queen worked extra hard to hold onto her reputation as being blessed with both brains and beauty.

According to the accounts of her ladies-in-waiting, Elizabeth needed a long time to get ready each day. She would line her eyes with charcoal and her face, hands and neck were then painted with a mixture of white lead and vinegar. And, of course, like many ladies of the time, she wore a wig every day. What’s more, Elizabeth was always determined to be the most eye-catching woman in the room. She would always dress in colorful gowns made from rich materials, while she would insist that her ladies-in-waiting would only wear plain black or white gowns.

1. FACT: Elizabeth I was a genuine a polyglot, capable of speaking 10 languages like a native

Over the centuries, England has been ruled by monarchs of varying intelligence. But Elizabeth I was almost certainly one of the kingdom’s most intellectually-blessed rulers. She was well-read, especially for a woman in the 16th century. What’s more, her reputation as being an expert in languages is well-deserved. According to the records, Elizabeth was a true polyglot and her expertise in a number of different tongues helped her rule over a divided kingdom and negotiate directly with foreign allies and potential enemies.

As a young girl, Princess Elizabeth learned Welsh from her nanny and mistress. She was then taught French, Latin, Greek and Italian by her private tutor. Such an education would have been pretty standard for a girl of her social standing at the time. On top of this, however, Elizabeth could speak Spanish, Dutch, Scottish, Irish and even Cornish, bringing her total up to 10. Notably, foreigners commended the Queen for her linguistic skills. For instance, when Giovanni Carlo Scaramelli, the Ambassador of Venice, visited England in 1603, he and the Queen conversed in Italian. He remarked “she possessed these languages so thoroughly that each appeared to be her native tongue.”

“Elizabeth I: Reputations and Reconfigurations.” History.ac.uk.

“Was Queen Elizabeth I A Man?” History Answers UK.

“7 things you (probably) didn’t know about Elizabeth I).” History Extra.

“Did the Virgin Queen have a secret love child?” Daily Mail, June 2006.

“Elizabeth I: the monarch behind the mask.” History Extra.