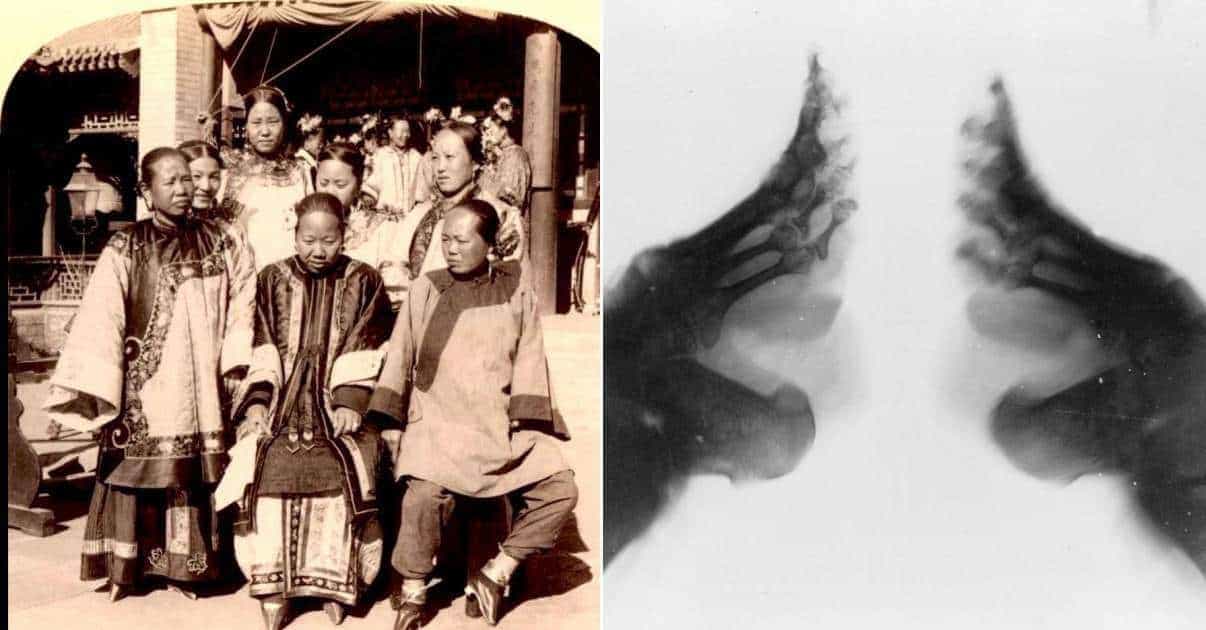 Legend states that the practice of footbinding was inspired by a 10th-century dancer, whose small feet entranced the Emperor. Wanting to emulate this dancer’s beauty- and perhaps attract the attention of an Emperor themselves- women began binding their own feet to make them as small as possible. Of course, most historians agree that this legend has little to do with reality. But it does offer some insight into the cultural attitudes towards foot binding. Obviously, small feet were considered very attractive in Imperial China, similar to the way that Victorian men idolized an unnaturally thin waist.

And small feet were considered not just visually stimulating, but a sign of refinement and sophistication. Women with bound feet were usually unable to walk normally. Instead, balancing on bound feet required careful, short steps. So women who had undergone the procedure often couldn’t work as effectively in the fields. A distinction grew between women with bound feet who families could afford to keep out of the field and women with natural feet who were usually agricultural workers like most of Chinese society. Bound feet became a symbol of status, and as is often the case with status symbols, attractive.

Bound feet also offered an air of mystery. Because the feet were tightly bound, the only time someone would see a woman’s feet were in the bedroom. In the same way that seeing a Victorian women’s ankles were considered scandalous and even erotic, men in China fantasized about seeing women’s bare feet. Bare feet were never depicted in art, even when the subject was painted nude. In many ways, the feet were considered the most intimate part of the body. The allure of the feet was in the fact that men never really saw them. The mystery made the feet an object of taboo speculation and desire.

The perfect size of a foot was considered to be around three Chinese inches. Any foot this size or under was classified as a “golden lotus“. The next category started at four inches and was called a “silver lotus.” And any woman with feet over five inches was considered an “iron lotus.” The closer a woman’s feet were to the “golden lotus,” the more likely she was to get married. Thus, the foot-binding process focused on making the feet as close to a golden lotus as possible. And from the 10th century to the 20th century the golden lotus remained the standard for beauty in China.

The fact that the practice endured for almost a millennia, and the fact that female relatives often performed the breaking, suggests that women saw value in it as well. Women likely realized that their daughters would be able to secure better marriages if they had bound feet. And in a society where one of the only avenues of social advancement for women was through marriage, foot binding may have been seen as necessary for a girl’s future. But even if women didn’t want to bind their daughters’ feet, they had little choice.

Chinese society was, and largely remains, strictly organized on Confucian principles. Named after the Chinese philosopher Confucius, Confucianism teaches that society is based on obligations. Sons and daughters owe respect and obedience to their parents, and their parents owe obedience to their rulers, who owe obedience to heaven. Stepping outside of the bounds of obedience was the worst sin that someone could commit. So, challenging the traditional practice of footbinding was unthinkable for most women. And some historians have argued that the practice was actually created specifically to prevent women from living independently from their family.

Also Read: What it was like Growing up in Ancient China?

Obviously, a woman with bound feet would find it hard to make a living outside of the home. Not only would it be hard to work, but the physical difficulty of walking away from home meant that women with bound feet would find it hard to even leave in the first place. Thus, footbinding may have been a way to ensure that women depended on their family to survive and were unable to leave the house until their father arranged a marriage for them. Once in a new household, they would then be dependent on their husband and his family.

For men, a woman with bound feet was attractive for marriage not just because the feet themselves were erotic, but because they knew the woman would be obedient as a wife. Of course, the truth is that a number of different factors probably played some role in the popularity of footbinding. It was a way to seem more feminine, desirable, and civilized. And it was also a sign of obedience and commitment to the traditional Confucian ideal of sacrifice for the sake of your family. And in many ways, women saw the pain of foot binding as the cost they needed to pay for beauty and social standing.

Of course, it’s hard to separate footbinding from the element of sexual desire. For whatever reason, men desired women with smaller feet. And that desire made women with smaller feet more likely to get married. In a society where marriage was the ultimate goal imposed on women, this created an incentive for women to participate in foot binding. And this strange system that tied status and sexuality to the size of a woman’s feet lasted for a very long time. Even today, you can find elderly women in China with bound feet, a living reminder of the sometimes brutal standards of beauty that society can place on women.

ThoughtCo – The History of Foot Binding in China