End of an Empire: How the Byzantines Fell at Constantinople in 1453 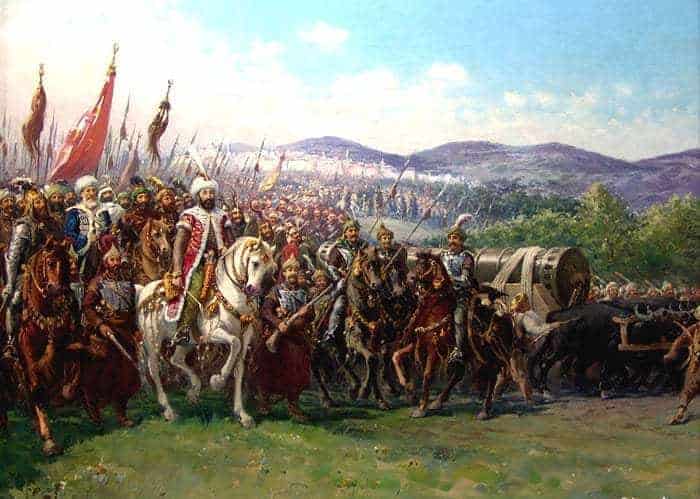 End of an Empire: How the Byzantines Fell at Constantinople in 1453

On May 29, 1453, the city of Constantinople fell and signaled the official fall of the Byzantine Empire, even though it had been on its last legs for centuries. Indeed, by the time Constantine XI died in his kingdom’s capital, the ‘empire’ was little more than the city and a couple of small pieces of land. Nonetheless, the sack of Constantinople by the Ottomans (led by Sultan Mehmed II) was a historic moment as the Muslims finally took the city they had coveted for hundreds of years.

The Byzantine Empire had been fractured beyond repair for hundreds of years (some suggest the sacking of the city by the Crusaders in 1204 was the beginning of the end). The city of Constantinople survived numerous attempts at conquest as the sturdy Theodosian Walls kept marauders at bay. Since the Arabs tried to conquer the city in the 670s, Muslims desperately tried to make it their capital.

Although a 1373 treaty ensured the Byzantine emperor was little more than a Turkish vassal, the Ottomans were unable to take Constantinople. Sultan Mehmed II became the Ottoman leader in 1451 and quickly decided the time was ripe to take the stubborn city once and for all. The Byzantine Emperor, Constantine XI, knew he needed new technology and warriors to hold off the Ottomans. In 1451, he hired a well-respected Christian engineer named Urban or ‘Orban,’ a Hungarian who was an expert in cannon, to help defend Constantinople.

However, the Byzantines couldn’t pay the expert enough money to retain the man’s services, so he worked for the Turks instead. The empire’s inability to pay sealed its fate, as Urban produced the largest cannon in history to that point. The Imperial, as it was called, was 29-feet long and fired stones weighing up to 1,300 pounds. The cannon was so heavy that 60 oxen had to haul it from the city of Edirne. The weakness of the Imperial was that it rapidly overheated so it could only fire seven shots a day. Nonetheless, its incredible power proved to be enough to breach the walls of Constantinople. Ironically, Urban died at some point during the siege when one of his superguns exploded.

Constantine XI knew the Ottomans were coming so he repaired the Theodosian Walls and stretched a gigantic chain across the mouth of the city’s harbor to prevent an attack on the Golden Horn walls. The Byzantines received little help from Western nations, and the city was defended by no more than 10,000 soldiers while thousands of the city’s residents also took up arms.

In contrast, the Ottomans had forces of up to 120,000 men including cavalry, 70 cannon, and at least 70 ships. The main body of the army arrived outside Constantinople on April 1, 1453, while Mehmed arrived four days later and made his final preparations. The Turkish cannon bombardment signaled the beginning of the siege, and the Byzantines fought bravely against almost impossible odds.

The Turks suffered heavy casualties during the siege, especially after a major battle on April 18 where up to 18,000 Ottomans died. Two days later, four Christian ships fought their way through an Ottoman blockade to reach the city. In the middle of May, the frustrated Mehmed offered to lift the siege if the Emperor would pay an annual tribute of 100,000 gold bezants. Alternatively, all inhabitants could leave with their possessions unharmed. The Byzantines knew they couldn’t afford such a sum nor were they prepared to abandon the city, so they refused in the knowledge that death was likely.

On May 26, a thick fog surrounded Constantinople, and the inhabitants believed it hid the departure of the Holy Spirit from the Hagia Sophia. As a result, they probably took it as a bad omen, and Constantine XI prepared for the worst. On the evening of May 28, Constantine apparently told his subjects that they must prepare to die for faith and family. After calling a council of war on May 26, Mehmed prepared for an all-out assault on the May 28/29 after a day of prayer and rest.

The final assault began just before midnight on May 28 as Mehmed sent auxiliaries to kill and tire out the defenders. The next step involved attacking the weakened Blachernae walls, and then the Janissaries charged. The Byzantines held out until their commander was wounded and then their defense collapsed. Constantine XI led the defense on the Lycus Valley walls, but eventually the Turks swarmed the city and forced him back. No one knows the exact fate of the emperor because his body was never recovered, but it is likely that he died leading one final desperate attack.

The Ottomans streamed into the morning service at Hagia Sophia and killed many worshippers while capturing the rest. Mehmed allowed his men to plunder the city for three days instead of the usual one day of raiding. The total losses sustained by both sides during the prolonged siege are unknown, although an estimated 4,000 defenders died while up to 30,000 were captured and enslaved. The Ottomans probably lost tens of thousands. The fall of Constantinople was deemed as a shattering blow to Christendom, so Pope Nicholas V called for a crusade to recover the city. However, not one Western monarch answered the call, and Mehmed renamed the city Istanbul.

The siege of Constantinople was a turning point in history and is often recognized as the end of the Middle Ages and the beginning of the Renaissance era. Some Greek scholars in Constantinople successfully fled the city and brought their knowledge and manuscripts with them to Western Europe. The fall of the city also ended European trading links with Asia. As a result, explorers had to find new routes and their exploits began an age of exploration.

Mehmed II earned the nickname ‘Conqueror,’ and the city of Constantinople gave him a valuable base for further European conquest. The fall of the city finally ended the nearly 1,500 years long Roman Empire, and the Ottomans held on to the city until their empire crumbled after World War I.