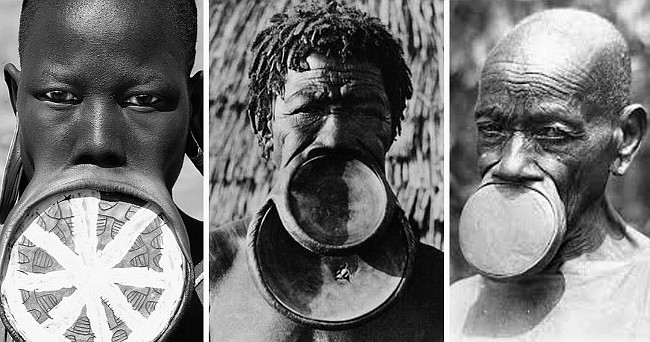 Scarification belongs in the same basic category as tattooing, insofar as beautification is achieved by controlled injury. As a method, scarification probably predates tattooing as a form of body art, and arguably, the most dramatic examples of it can be found in Africa. There the practice is simply to cut a millimeter or so into the subcutaneous later, and rub ashes into the wound. It is this that creates the signature raised elevation of the wound, and when arranged in a pattern, the desired effect is achieved.

Less dramatic examples of facial scarring can amount to no more than a slice or two on the cheek, but there are hundreds of recorded examples of body scarification that would bring water to your eyes just to look at them.

What purpose did all of this serve? Well, we are back to the simple principle of beauty and eroticism, combined with tribal and clan identification, as well as rites of passage and initiation. French anthropologist Claude Lévi-Strauss once described the body as a surface waiting for the imprint of culture. In fact, anthropologists have scratched their heads over the matter of ‘controlled injury’ body art ever since it first surfaced as a specific field of study. Why, for example, is the practice so prevalent in Africa, and the answer, it would seem, has to do with the fact that scars are more visible on darker skin than inked tattoos. Then there is the fact that the process, which is achieved usually over many sessions, produces endorphins, from which a euphoric state can be achieved. Another reason often cited is traditional healing, and that different variations of the process produce different therapeutic results.

It is generally agreed, though, like breast ironing, that none engaged in the practice could truly say what the reasons and origins of it are, but simply that it is so bound up in history and tradition that generations do it simply because the previous generation did.

It is undeniable, though, that even though the process behind it can be rather hard to deal with, the results certainly can be very compelling.

Filing and chipping the front teeth to sharpened points is a body modification practice that is very widespread throughout the world. The tradition was, and in some places still is common in equatorial Africa, Southeast Asia, among the Mayans and associated people and from time to time among the Australian Aborigines.

How and why? Well the how part is quite easy. Usually a sharp instrument, sometimes bespoke and sometimes not, is employed to delicately chip away at the enamel until the desired effect is achieved. Painful and brain jarring at the very least, one can imagine that a few hours of that would send you to bed with a headache and a toothache.

Why is a little different. In some cases, teeth were filed down to a nub in order to reduce the impression of anger and hostility, and in other cases to increase the same effect. The practice was certainly cosmetic, because it offered absolutely no advantage in battle or in the business of hunting, or in eating meat. In fact, the removal of so much essential enamel from the tooth surface simply exposes it to enhance risk of decay and disintegration, and after that, hot and cold sensitivity must be awful.

There has in recent years, with the popularity of body modification, been an upsurge in the business of tooth sharpening, but with the advantage of modern dentistry, the same effect can be achieved without necessarily exposing the inner material of the tooth.

Nonetheless, here we have yet another challenging body modification undertaken for whatever specific reason, and another questionable chapter in the pursuit of ideal beauty.

We end this list with what must truly be one of the oddest, most impractical and downright unattractive combinations of body modification and ornamentation. Lip platters, and only question is why?

A lip platter, as the illustration makes clear, is simply the perforation and elongation of either one or both lips, usually the bottom, to the extent that a disc of varying size can be held in place and worn as an ornament. Typically the labret is pierced, and as with neck stretching and skull elongating, by increments, the perforation is expanding by the insertion of ever larger discs or plates. The practice is most widespread in Africa where it is still widely practised, most notably in parts of Ethiopia and the Sahel region.

In most parts of Africa, it is usually accompanied by the removal of the two lower front teeth. The ‘why’ part of this is again confusing, and speculative. Anthropologists have postulated that the more extreme the modification, and the larger and more elaborate the plate, the higher the individual stands in the social hierarchy.

As a general rule of thumb, a girl will have her lip pierced a year or so before marriage, after which a simple wooden peg is inserted, and once healed, the process begins. The girl will craft her own plate, and as the size of the plate increases, so does the intricacy of its ornamentation. The largest lip plate on record was identified in Ethiopia, and it measured 23.4 inches in circumference and was 7.6 inches wide.

The only other region of the world where the practice has been recording is in Amazonia, although in the Pacific Northwest of America, among the Haida, Tsimshian, and Tlingit a similar practice has been observed, usually as a symbol of a woman’s maturity, and not in any way as extreme as those in Africa. In Africa, the practice is confined largely to women, but among Amazon tribes it is strictly a male preserve, usually as a mark of entering the ‘men’s house’.

It also goes without saying that the Modern Primitive movement as adopted this, among many other ancient methods of beautification, so one is just as likely to see a lip plate adorning a youth on the New York Metro as in a tourist village in Ethiopia.

“Teeth-filing as a Mark of Beauty and Belonging in 19th Century Africa.” DianaBuja’s Blog. March 2012