Elizabeth Stuart, the Winter Queen, was One of the Most Extraordinary Monarchs in History 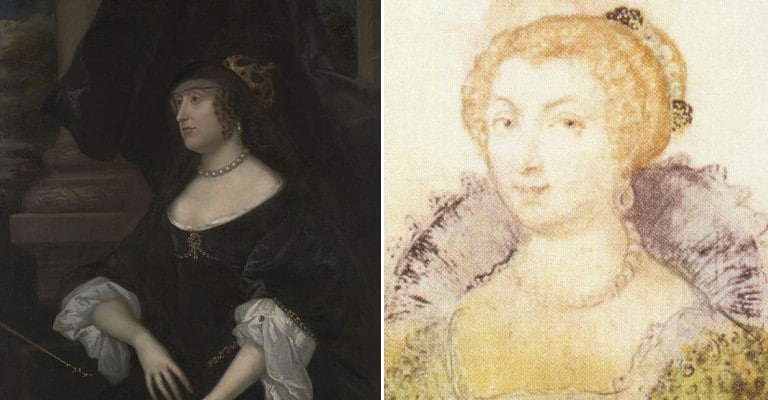 Elizabeth Stuart, the Winter Queen, was One of the Most Extraordinary Monarchs in History

Named in honor of Elizabeth I of England, Elizabeth Stuart was born on August 19, 1596 at Falkland castle, in Fifeshire, Scotland. Elizabeth, as the second child and eldest daughter of James VI of Scotland and I of England and his Queen, Anne of Denmark, was never destined to be a Queen. However, she had brushes with not one but two European thrones. For Elizabeth was the monarch of choice for the men behind the Gunpowder Plot who, if successful, planned to put her in her father’s place as a puppet Queen. Then, during her marriage to Frederick, Count of the Palatine of the Rhine, Elizabeth became Queen of Bohemia for just one year, earning herself the title, The Winter Queen.

Elizabeth may have been a thwarted Queen, however, she continued to be a forceful and energetic ruler who fought for her children’s territorial rights. Elizabeth also acted as an inadvertent stepping-stone between two British Royal Dynasties. For although she never ascended the throne of England herself, it was because of Elizabeth’s Stuart lineage that the Hanoverians ascended to the British throne when her grandson, George, Duke of Brunswick-Lüneburg, became George I of England. The extraordinary story of this would be Queen, and the dynasty she founded begins in 1605 when Elizabeth was just nine years old.

The Gunpowder Plotter’s Queen of Choice

In 1603, Elizabeth’s father, James VI of Scotland became James I of England after the death of Elizabeth I. James immediately left Scotland, for London, where he established his power base. Elizabeth, her mother, Queen Anne and the heir to both thrones, her brother Prince Henry, quickly followed “in a triumphal progress of perpetual entertainment. “However, once in England, the seven-year-old Elizabeth did not join her parents at court. Instead, she was commended to the care of Lord and Lady Harrington at Coombe Abbey in Warwickshire.

The Harringtons were diligent in their care of the young Princess, following James I’s instructions that her education should include plenty of history and religion but no Latin and Greek as James believed that “to make women learned and foxes tame had the same effect- to make them more cunning.” However, they also indulged Elizabeth’s love of nature and constructed her an aviary and menagerie on the estate which Elizabeth called “her territories” and “her Fairy Farm.”

However, the real world was threatening to encroach upon this comfortable existence. In 1605, a Catholic plot was hatched to kill King James. James was not known for his religious intolerance, and the plotters saw his death as the opportunity to pave the way for a Catholic restoration. The plan was to blow up the King and Prince Henry during the opening of parliament. Then, the plotters would initiate a revolt in the Midlands and install a new monarch. James’s only other son, Charles, was considered too young and feeble to make a suitable public figure. However, the plotters believed the nine-year-old Elizabeth would make the perfect puppet Queen.

For the plan to work, the plotters had to lure Elizabeth’s guardian, Lord Harrington away from his charge. So he was invited to a fake hunt. However, Harrington was suspicious. He had heard that a group of Catholics, headed by Sir Everard Digby were meeting at nearby Dunchurch on November 4th. When he heard that someone had stolen all of a neighbor’s horses, the pieces fell into place. Realizing that “some great rebellion is at hand,” Harrington refused the invitation and without waiting for royal approval, spirited Elizabeth away to the safety of the town of Coventry.

The rest is history. The plot was foiled and King James and Prince Henry saved and the conspirators executed. When she learned of the plan to place her on the throne, the shaken Princess remarked, “what a queen should I have been by this means? I should rather have been with my royal father in the parliament house than wear his crown on such condition’. Elizabeth returned to Coombe Abbey until finally, aged 14; she made her debut at the English Court. Her beauty was a talking point. However, it was political and dynastic connections that would determine Elizabeth’s future marriage.

In 1613, Elizabeth married Frederick, Count Palatine of the Rhine. Frederick was descended from the Kings of Aragon and Sicily- and like Elizabeth Henry II of England. However, her mother, Queen Anne, disapproved of the match because Frederick was not a King or Prince. Indeed, the heir to the throne of France and the King of Spain’s nephew were among Elizabeth’s suitors. However, James chose his son in law for reasons of religious politics. For Frederick was a staunch defender of the Protestant faith- and the foremost Protestant leader in Germany. Thus the marriage was formed to strengthen Europe’s Protestant states.

Fortunately, Elizabeth and Frederick appear to have formed a genuine, loving bond in the run-up to their lavish Valentine Day wedding. Then, after a two-month honeymoon in London, the couple began their journey back to Frederick’s court in Heidelberg. There the royal couple settled and in five years Elizabeth gave birth to three children: Frederick Henry, Prince of the Palatinate, Charles, and Elizabeth. However, they were not to remain at Heidelberg for long. For in 1618, the Thirty Years War broke out in central Europe and Frederick became central to specific events.

At the height of its power, the kingdom of Bohemia had extended from Hungary to the Adriatic Sea. By Elizabeth’s time, its sphere of influence had shrunk, covering what is now the Czech Republic. The rule of Bohemia also came under the auspices of the Hapsburg Empire. However, in 1619, this all changed. For when the reigning King, Matthias, died, religious tolerance towards protestants also passed away. The Habsburg candidate for Bohemia’s throne, Archduke Ferdinand was a rabid anti Protestants, known for his violent persecutions. So Bohemia’s Protestant’s decided on their own candidate for King: Frederick, the Elector of the Palatine. Elizabeth was central to persuading Frederick to accept, appealing to his honor.

Elizabeth was central to persuading Frederick to accept the crown, appealing to his honor” as a prince and a cavalier and to his humanity as a Christian.” The family moved to Prague where on November 4, 1619, Frederick was crowned King. Three days later, Elizabeth’ was also crowned. Despite her mother’s misgivings at the match, marriage to Frederick had made a Queen after all. However, it was a state of affairs that was not to last long. For although Frederick was a popular King, Archduke Ferdinand did not intend to give up his throne without a fight.

On November 8, 1620, King Frederick was defeated by Ferdinand’s troops at the Battle of White Mountain. Elizabeth fled Prague for Custrin Castle near Berlin and Frederick soon joined her. The couple became known as “The Winter King” and “The Winter Queen” because of the time of year which they gained- and lost – their throne. However, the throne of Bohemia was not the only thing Frederick and Elizabeth had lost. For the Palatinate was also now occupied by the Catholic League. They could not go home. The only option was for the Royal Couple to accept the invitation Protestant Prince of Orange and go in the exile in The Hague.

“The Queen of Hearts” and the Mother of a Dynasty

Elizabeth and Frederick arrived at The Hague in spring 1621 with the remnants of their court. While Frederick continued his military endeavors, it was from this secure base in exile that Elizabeth began her own determined efforts to regain some of what she and Frederick had lost. Over the next twenty years, Elizabeth wrote thousands of letters bargaining and negotiating to restore her family’s fortunes. During these early years at The Hague, Elizabeth earned herself a new title: ‘The Queen of Hearts” as she became the center of chivalrous attention from Duke Christian of Brunswick, and William Craven, 1stEarl of Craven, who were two of her husband’s principle military supporters.

In 1632, after a ten-year hiatus, Frederick once again set out from The Hague to do battle to reclaim his throne, this time in the company of the King of Sweden. He never returned. However, Frederick did not die fighting but was killed instead by an ongoing infection. For three days after hearing of his death, a devastated Elizabeth did not eat, sleep or drink. However, when her brother Charles I offered her refuge in England, Elizabeth refused. She chose instead to remain in The Hague and fight for her children’s rights.

By 1648, the Thirty Years War was over. Elizabeth’s eldest surviving son, Charles finally regained the position of Elector of the Palatinate and a portion of his family’s lost lands under the peace of Westphalia. However, for Elizabeth, there was no return to the good times. Charles refused to allow her back to the Palatinate, as he perceived Elizabeth to be a neglectful and distant mother because of her years of political campaigning. Then, the following year, Elizabeth suffered a further blow when her royal annuity from England ended with the execution of Charles I.

However, after years of isolation and relative poverty, on May 26, 1661, Elizabeth Stuart returned to England. She had no intention of returning to The Hague, and indeed she did not. For on the eve of what would have been her 49th wedding anniversary, Elizabeth Stuart died of a hemorrhage to the lungs caused by pneumonia. Known only as the mother of Prince Rupert, she had so valiantly supported his Uncle Charles I; she was buried quietly in Westminster Abbey. However, although she was dead, Elizabeth Stuart’s story was not yet done.

In 1714, Queen Anne of England, Elizabeth’s great-niece died. The deceased Queen had outlived all her children meaning that the Stuart dynasty died with her. However, as James I’s eldest daughter, the precedence of succession went to Elizabeth Stuarts’s descendants. Most of Elizabeth’s children had died childless or as Catholic converts. However, her youngest daughter, Sophie, had married the Protestant Elector of Hanover. So, on October 20, 1714, Sophie’s son George has crowned as the first Hanover King of England. A secure crown may have eluded Elizabeth Stuart however, she had founded a new royal dynasty- and all subsequent British monarchs, whatever their house, would trace their direct descent from her.