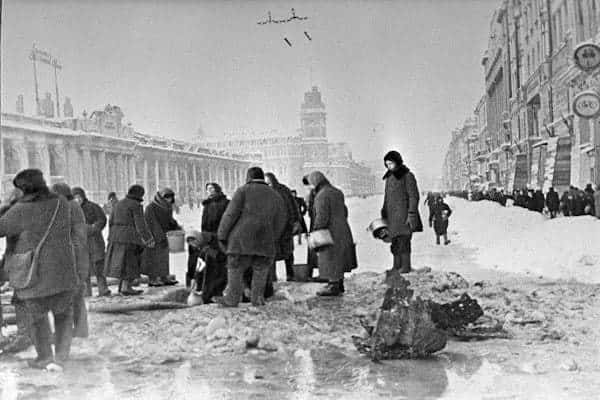 It’s hard to imagine a worse place to find yourself in all of history than the Soviet city of Leningrad during WWII. Leningrad was the former capital of Russia and one of the industrial hubs of the nation. Thus it one of the first major targets of Operation Barbarossa, the German invasion of the Soviet Union. But the goal was never to capture the city. Hitler feared that capturing the city would make him responsible for feeding the millions of civilians who called it home. Instead, the city was to be wiped off the face of the Earth… along with everyone inside.

In June, just weeks after the start of the invasion, the civilians of Leningrad were mobilized to construct defenses and barricades. Though many- particularly children- were later evacuated, the Soviets expected the more than a million people who remained to defend the city to the death. Meanwhile, the Germans captured the nearby city of Novgorod by August in the face of ferocious Soviet resistance. By the end of the month, the first German troops were just outside Leningrad, and German artillery began shelling the city. Within a month, the last supply routes to the city were cut off. One of the deadliest sieges in history had begun.

According to German projections, it would take just a few weeks before everyone in the city was starving. Within a few months, the entire population would be dead. All the Germans had to do now was wait. And as they predicted, the food supply in the city ran out quickly. Soon, nearly the entire population was starving. Everyone in Leningrad now had to make the same choice every starving person in history has had to make. Do they do whatever it takes to survive? Or do they try to hold on to their principles in the face of death?

And for one group of civilians in Leningrad, that was a very complicated question. The researchers at the Vavilov Institute of Plant Industry were, after all, sitting on one of the last supplies of food in the city. The problem was that the food they were protecting wasn’t just meant to feed the citizens of Leningrad, it was meant to ensure the survival of the entire Russian people. You see, the Vavilov Institute wasn’t just the leading agricultural research center in Russia. It was also the world’s largest seed vault.

The seeds inside the vault were the result of decades of selective breeding. They promised a future where Russian peasants could produce more than they ever had, breaking cycles of famine that had lasted for centuries. The work of a generation of scientists had been entrusted to the care of the Vavilov Institute researchers, along with the best chance Russia had at a future free of hunger, but only if they were willing to starve now to defend it. As German shells and bombs rained down on the hungry city, the remaining members of the Institute made a choice: The future of Russia would come first, no matter the cost.

The Vavilov Institute was the brainchild of Nikolay Vavilov. Vavilov was a botanist who had grown up in a poor rural village and seen the devastation that crop failures could cause for Russian farmers. From an early age, Vavilov dreamed of one day eliminating this cycle of poor harvests and famines. As a scientist, he devoted himself to developing new crops that could help farmers become productive enough to feed their families and the entire nation. The culmination of this work was his seed facility in Leningrad, which trained new agricultural scientists who shared Vavilov’s dream.

But in true Soviet fashion, Vavilov soon became a target of the state. Josef Stalin had become a staunch believer in the pseudo-scientific ideas of another Soviet botanist named Trofim Lysenko. Lysenko rejected the idea that traits were passed down in plants by Mendelian genetics and favored his own interpretation of inheritance called Lysenkoism. Scientists who refused to adopt Lysenko’s ideas were imprisoned as enemies of the state. Vavilov himself refused to accept Lysenkoism, and in July 1941, just weeks before the Germans surrounded Leningrad, he was sentenced to death.

As Vavilov starved in a prison cell, his students were starving in Leningrad in the Institute he had built. Having vowed to protect Vavilov’s legacy and the future of Russia, they now had to make another choice. It was clear that they couldn’t save all of the hundreds of thousands of seeds in the Institute from the German bombs and the hungry citizens of Leningrad. They carefully selected a cross-section of their live plants and moved them along with the most important seeds into a complex of 16 cold storage rooms in the basement. From then on, the rooms were kept under a 24-hour watch.

It was necessary because the situation in the city was rapidly becoming desperate. After just a few weeks, the first deaths by starvation were recorded. As winter set in, diseases like tuberculosis began to spread silently through the ruined streets. And by December, the police were investigating reports of cannibalism. For most of the people of Leningrad, the subject was nothing more than a dark rumor. Parents would warn their children not to stray out of sight for fear that desperate people would grab them off the streets and butcher them. Soon, the children transformed these warnings into nursery rhymes.

“I’m having human flesh for lunch,” one popular rhyme went, “And for supper, clearly. I’ll need a little baby. I’ll take the neighbour’s. Steal him out of his cradle.” As is often the case with nursery rhymes, it was a reflection of a dark truth. After one year of the siege, the NKVD arrested over 2,000 people on charges of eating human flesh. They were divided into those who had eaten the corpses of the dead and those who had actually killed to satisfy their hunger. The former were given prison sentences, and the latter were shot. It was a sign of the desperation in the city. And in the basement of the Institute, the researchers were growing as desperate as anyone.

Whether or not you starved in Leningrad depended largely on who you were. The available food was distributed by a rationing system run by the local communist party authorities. Unsurprisingly, those who were in charge of distributing food generally remained healthy throughout the siege. The local party leaders and their wives or girlfriends also rarely lacked for food. The irony of communist leaders eating so much better than everyone else didn’t escape the notice of the hungry Leningraders. One woman was recorded whispering to another in a breadline, “They’re stuffing their faces while we starve.”

As researchers at an institute founded by a man declared an enemy of the state, the men guarding the seed vault hardly got the first choice of rations. Soon, they were starving along with everyone else. A new rule was agreed upon: no one could be alone with the plants. The risk of even the most dedicated scientist’s will breaking in the face of ravenous hunger was too great. They swore a vow to protect the future of Russia from all threats, even themselves. But in the dead of winter, new threats seemed to emerge every day.

The first enemy was the cold. Though many of their seeds benefited from freezing, their potatoes began showing signs of damage from the frost. So, braving the German artillery and air barrages that were killing hundreds of people a week, scientists ran through the streets collecting pieces of flammable debris from the ruined houses. By burning them, they were able to keep the potatoes warm enough to survive. It was a clever solution that made the most of their limited resources. But there was still another, more determined enemy to contend with: the rats.

The starving city was filled with the vermin, who grew fat off the corpses littering the abandoned allies and basements of the city. And when even this seemingly-inexhaustible supply of food ran low, many found their way into the seed vault. The remaining months of the siege would be a constant battle with the furry invaders as researchers armed with metal spikes took turns hunting vermin through the dark corridors of the basement. It was a task that seemed to never end as the siege went on for months and then years.

Finally, as the Soviets shifted back onto the offensive, the army began pushing towards Leningrad in 1943. In January, the Soviets launched Operation Iskra, breaking the German hold on the city and liberating the populace. The siege had lasted more than 900 days and claimed more than a million lives. The brave researchers of the Vavilov Institute had suffered as much as anyone for their principles. At least nine of them starved to death during the siege. Many collapsed from hunger in the vaults, surrounded by enough food to last them for years. Even death wasn’t enough to shake their conviction that the future of Russia was more important than their lives.