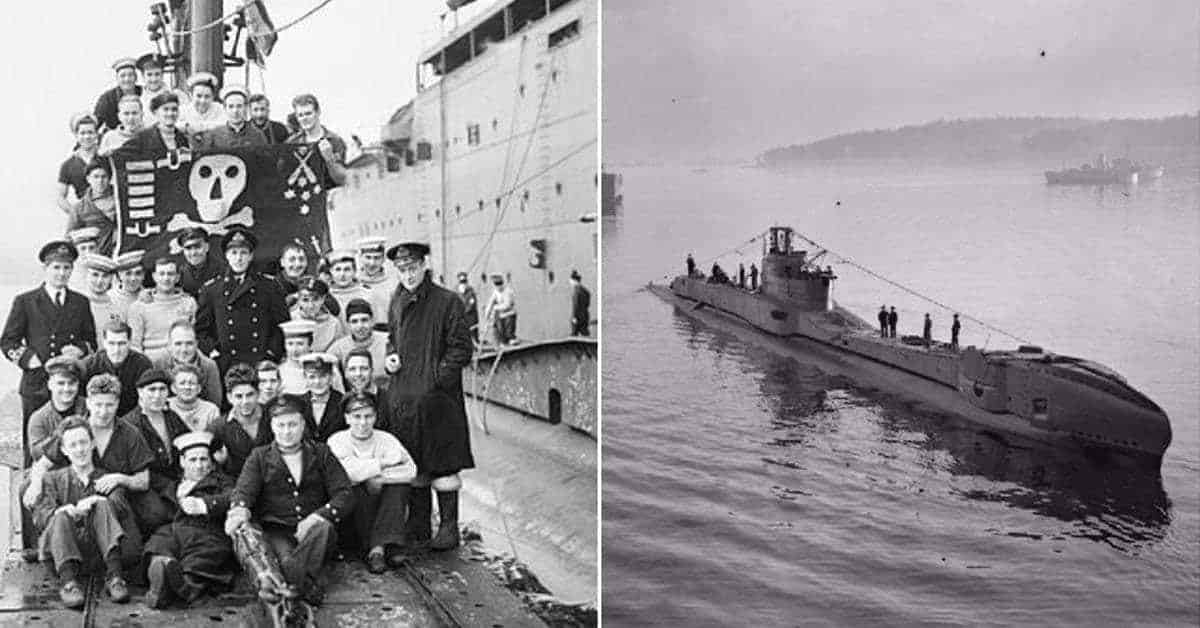 During the years following the First World War Western navies, particularly England’s Royal Navy, struggled to catch up with the submarine technology and tactics with which the German Navy had nearly brought England to ruin. The German Navy had proven the submarine to be an offensive weapon to reckon with. This did not sit well with their British cousins, who considered Britannia to still rule the waves, although the British did concede that modern naval warfare meant using submarines against maritime enemies.

By the late 1930s, British shipyards such as Liverpool’s Cammell Laird were constructing T-class submarines, the largest yet built for the British Navy. The boats (seagoing submarines are called “boats” by their crews) were equipped with 10 hull penetrations for torpedo tubes, the most installed on any submarine of the day. While the ten torpedo tubes gave the boats considerable firepower they also presented a flooding hazard which could place the vessel in jeopardy of sinking. Eventually, 53 T-class submarines were built, four of which were to serve in the Royal Netherlands Navy. One of the submarines retained in the British Navy was christened HMS Thetis. Thetis was launched in June 1938 and began trials to prepare itself for Royal Navy service as Europe lurched towards World War II.

Thetis experienced problems during her acceptance trials which delayed the boat’s commissioning into the Royal Navy. Initial problems were with the boat’s control planes, essential to the submarine’s ability to drive, operate safely submerged, and return to the surface. Other problems emerged with the torpedo tubes, which needed to be flooded with seawater to fire torpedoes. Submarine torpedo tubes contain a door which opens to the sea, allowing the torpedo to be ejected from the tube and a door which opens into the submarine, allowing a torpedo to be loaded into the tube. Interlocks prevent both doors from being opened at the same time, an obviously inadvisable circumstance.

Thetis was not equipped with such interlocks, but instead with indicators which allowed the crew to ensure the status of the doors. Additionally, drain tubes were in place which would allow water to escape the tube if it were flooded and a crewman checked by opening a petcock, calling the crew’s attention to the tube’s status. Thetis was freshly out of the shipyard and thus freshly painted inside and out. The painters’ in their enthusiasm had painted over the openings to the drain tubes. The petcocks were painted shut.

In June of 1939, Thetis was operating in Liverpool Bay for torpedo trials prior to commissioning. The crew of Thetis was aware of the fact that the United States Navy submarine USS Squalus had sunk during test dives near Portsmouth, New Hampshire the preceding month, with the loss of 26 men. As Thetis began its trials the US Navy was attempting to rescue survivors from the stricken Squalus. At least in part due to the Squalus incident, Thetis had more than the usual number of escort vessels accompanying her during her test operations.

Thetis carried her normal crew of 59 officers and men accompanied by another 44 shipyard workers, technical advisors, and naval observers when she attempted to dive on June 1, 1939. The crew, unable to determine that the torpedo tube outer doors were open because the drain tubes were clogged with paint, opened the internal doors of at least one tube. Efforts by the inexperienced crew to correct the problem were complicated by overcrowded conditions, leading to uncontrolled flooding in the forward torpedo room.

Emergency surfacing procedures were initiated and Thetis raised its stern to the surface before heeling to port and beginning a dive. Thetis sank bow down in 150 feet of water. Most of the crew survived the initial sinking and after signaling to accompanying observation ships they prepared to abandon the submarine using prearranged escape procedures.

The submarine was equipped with an escape hatch which required the user (only one man could escape at a time) to follow procedures exactly or the system would be disabled for those following. After the first four men cleared the escape hatch one by one, the fifth escapee panicked as he attempted the procedure, disabling the escape mechanism and dooming the rest of the crew to a slow death from carbon dioxide poisoning.

Thetis was over 275 feet long, and a goodly portion of its hull remained above the surface of the water, tantalizingly exposed to rescuers who could do little to help the men aboard. The option of cutting air holes in the exposed stern of Thetis was considered and rejected as being too dangerous to the integrity of the hull and the safety of the would-be rescuers. Over the course of the next 48 hours, the crew aboard Thetis continued to breathe.

Ninety-nine men died as the natural result of their own exhalations. The Thetis disaster remains Britain’s largest loss of life in a submarine.

While Thetis remained helplessly crippled and the families of its lost mourned, the US Navy succeeded in raising USS Squalus (after a dramatic rescue, broadcast live on radio, in which 33 survivors of the sinking were saved). Squalus was raised in September 1939, returned to the shipyard, and eventually recommissioned as USS Sailfish. Under that name, it served throughout World War II, and was credited with sinking 20 Japanese ships for a total of more than 80,000 tons. Throughout its career it was forbidden for anyone of its crew, on pain of being marooned at the next port of call, to utter the word Squalus.

Efforts to salvage Thetis began as Squalus was being raised. At least one diver died while preparing to raise Thetis. The effects and dangers of narcosis – called “the bends” by divers – were as yet poorly understood, leading to the loss of Petty Officer Henry Perdue as preparations were made to bring Thetis back to the surface. By early September Thetis was raised off the bottom and – still submerged – deliberately grounded in Anglesey, on the Welsh coast. With England now at war with Germany efforts to prepare the submarine for service intensified.

We Are the Mighty – The HMS Thunderbolt Was Lost with Almost All Hands. Twice!