What You Don't Know About intimacy in World War I 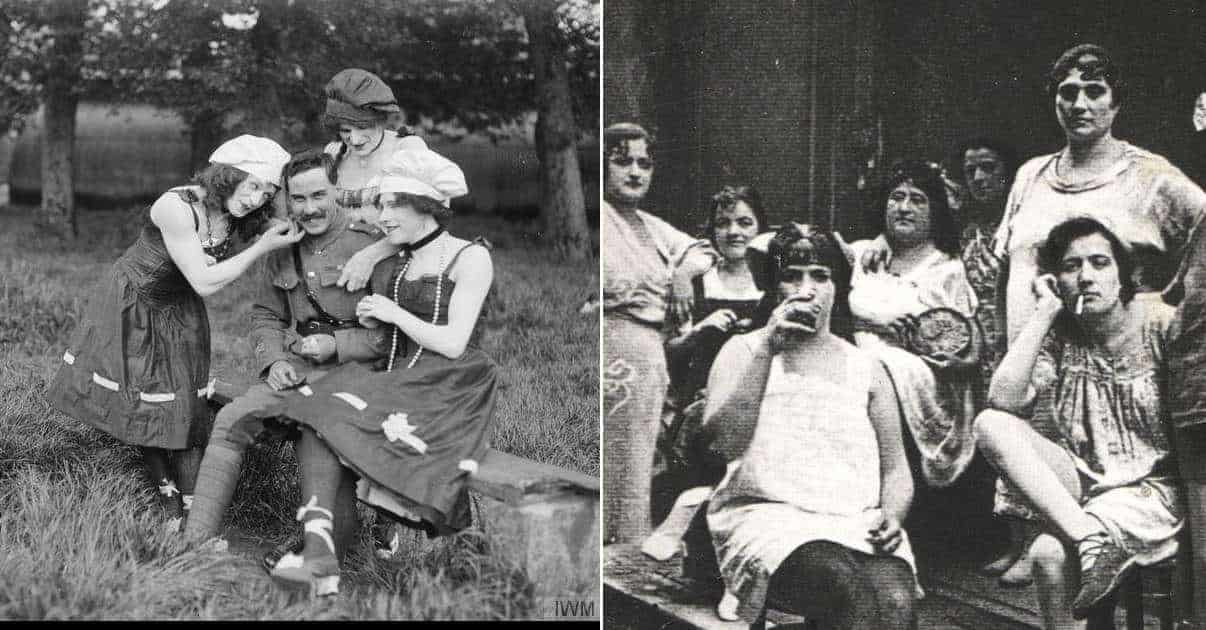 What You Don’t Know About intimacy in World War I

Amidst the unspeakable carnage on the Western Front, it makes sense that British soldiers were desperate to squeeze in whatever carnal pleasure they could. During the bloodiest phase of the First World War, the average lifespan of a British junior officer was just six weeks, while over the course of the conflict one in ten British soldiers who signed up (or was conscripted) to serve in France and Flanders was destined never to return home. With such a primitive existential threat lurking around every corner, we shouldn’t be too surprised that the war stimulated other primitive urges in the war’s combatants.

Yet the extent to which French brothels (or maisons tolérées) were set up to service the needs of British servicemen is quite staggering. At least 137 establishments, catering for 35 towns across Northern France, were in operation by 1917. Business in these places boomed; the brothels frequented by a steady stream of clientele on rotation from the front lines to the reserve lines to postings in towns and villages a few miles behind the trenches. As one commentator remarked, apart from the distant roar of artillery fire, being stationed in one of these towns in villages you wouldn’t have known there was a war on at all.

These settlements were conspicuous for their lack of young and middle-aged Frenchmen, who had been deployed to other locations across the Western Front in a desperate bid to hold back the German tide. And although the French were their allies, the British had no issues exploiting this. Anecdotes about British Tommies hitting it off with local girls abound in histories of the First World War: one anonymous veteran would even brag about how he made love to a French girl the moment he disembarked from his train—on the grass verge that substituted for a station.

If his boasts are to be believed, the same soldier was later billeted with an old Frenchman and his beautiful granddaughter. Every morning he claimed that the granddaughter would offer him coffee in bed before climbing in beside him: all to the blissful ignorance of her grandfather. Not all Tommies shared his Casanovan qualities, but for those unable to charm their way into the local culture there was always the paying alternative. And testament to how popular this alternative was is that in the space of just a year, one brothel-lined street attracted a staggering 171,000 customers.

According to eyewitness accounts, maisons tolérées were instantly recognisable, not just from their signage—a red lamp in the case of the notorious “Red Lamp” in the village of Béthune—but from the crowds of soldiers queuing up outside. The scene was described by a fresh arrival on the Western Front, Jack Wood (insert joke here about how the British Army had just got wood). Even the full Monty of trench warfare couldn’t numb him to the surprise of seeing such a long queue outside the establishment, which he likened to a scene from a football match back in Old Blighty. Albeit slightly more orderly—for is there’s one thing the British love more than anything it’s a good ol’ queue.

Conditions inside the brothel were no less cramped. After making it through the doors and paying the one franc admission fee, the men would crowd around inside a small café, little more spacious than their bunkers in the trenches. The difference, of course, was that the booze was flowing and they would be in the company of women willing to take them to one of the rooms upstairs (for a further five francs of course…) Yet even shelling out the equivalent of a week’s wages didn’t bring them instant gratification; contemporary accounts describe men sitting on every step leading upstairs waiting for their turn.

As you might expect, life on the Western Front brought with it no shortage of first time experiences. Not all of them, however, were necessarily scarring. For Private William Roworth it was during his time stationed in Northern France that he popped his cherry. He was a young lad; just 15 when he signed up, three years under the official recruiting age. And the fact he was just a teenager when he lost his virginity shines through as clear as day in his diary entry describing the deed: “it was like pulling your thing, but you have someone to talk to.”

But while Roworth may have left disappointed, Lieutenant R. Graham Dixon had no such complaints. He saw these brothels as a necessary outlet for the excess physical energy of British soldiers; a view shared by a contemporary parliamentarian who addressed the House of Commons with the words, “continence is neither impossible nor harmful”. In fact, Dixon had a favourite brothel to which he would regularly return during his time in Dunkirk, not least because it was home to whom Dixon romantically described as a “black-eyed, black-haired wench”.

We can all agree that Dixon was no Byron, but he was at least forthcoming in his praise for her professional expertise. Reflecting on his rapturous encountered with this lady of the night, he described her as a woman “whose enthusiasm was quite adequate and whose skill, likewise”. Dixon doesn’t specify, but the workplace of his “black-eyes, black-haired wench” was most likely a “blue lamp” brothel. Unlike the “red lamp” brothels of the rank-and-file, blue lamps were reserved exclusively for the officer class by secret edict of the British Army.

Though it wouldn’t have been necessary for Lieutenant “Lord Flashheart” Dixon, at least one blue lamp establishment offered its patrons an early form of Viagra. A private of the 10th Battalion Royal West Surrey Regiment, Fred Dixon—in no way a relation of the Lieutenant Dixon—visited a brothel in a couple of teenage girls handed out pills intended to give, “additional power in our amorous exploits.” Dixon’s colonel greedily gobbled up two, though how this affected his performance is unfortunately lost to the sands of time.

It didn’t take long for new arrivals to be inducted into this lifestyle. In his memoirs, a man who voluntarily swapped his place at Oxford University for a posting in the trenches, Lieutenant James Butlin, recalls some time he spent in the city of Rouen before returning to the front. He described Rouen as ruinous, not just to his purse but also to his morals. For talking to those who had seen the hellish scenes of no-man’s land, he quickly resolved that his life (precarious as it was) was to be enjoyed to the full.

The maisons tolérées weren’t only a temptation for young unmarried men. A contemporary observer noted that one particular queue outside the Red Lamp was formed not of young lads, but of older married men who were “missing their wives.” It might seem shocking, but as an institution the British Army was all too willing to forgive such transgressions. There were even chaplains on-hand, ready to cleanse the consciences of those who strayed from their marriage bed provided they stuck to licensed brothels and bring back their sweetheart in Old Blighty a cocktail of venereal diseases.

It was for good reason the chaplains inveighed against venereal disease. In fact, the threat of contracting a venereal disease such as syphilis or gonorrhea was serious enough that it warranted the attention of the British High Command. Lord Kitchener—that quintessential moustached military man of the Victorian era—issued an educational leaflet in the soldiers’ first pay-packet warning against the horrors of contracting something exotic. “In this new experience you may find temptations in both wine and women,” it sermonised. “You must entirely resist both”.

Of course, there was a vast gap between what was practised and what was preached. As one recruit, Private Richards, pointed out: “it may as well not been issued for all the notice we took.” Yet there was sound reasoning behind Kitchener’s propaganda that went beyond adhering to the traditional morals of the Victorian Age. As the war progressed and the horror became too much to handle, more and more men were being withdrawn from active duty because some venereal disease had rendered them unfit for service.

Most of the time, this was accidental, but not always. In their desperation for some respite from the rat-filled trenches, some men would actively seek out the brothel’s disease-riddled prostitutes in the hope of catching something. It really is testament to how bad conditions in the trenches must have been if syphilis was preferable, especially given how rudimentary the treatment was at the time and how it only brought you a month in hospital. Still, who knows how many times the call might have been given to go “over the top” that month…

The frequency with which British Tommies visited French brothels (or maisons tolérées) during the First World War is easily explicable give the situation they found themselves in. Staring death in the face on a daily basis was a good enough incentive to embrace a carpe diem mentality and not invest too much in the future. But there’s also a cultural context: all but the youngest combatants of the First World War had received a strict Victorian upbringing that shunned indulgent sexuality.

Many of the younger rank and file would have probably arrived in France as virgins, and even married men of the British Army the low hanging fruits combined with the apparent certainty of their imminent death offered tempting pickings. This is not to judge the actions of these men; the exceptional nature of their circumstances makes it both impossible and inappropriate for us to do so. But it does give all new meaning to the old cliché: all is fair in love and war.