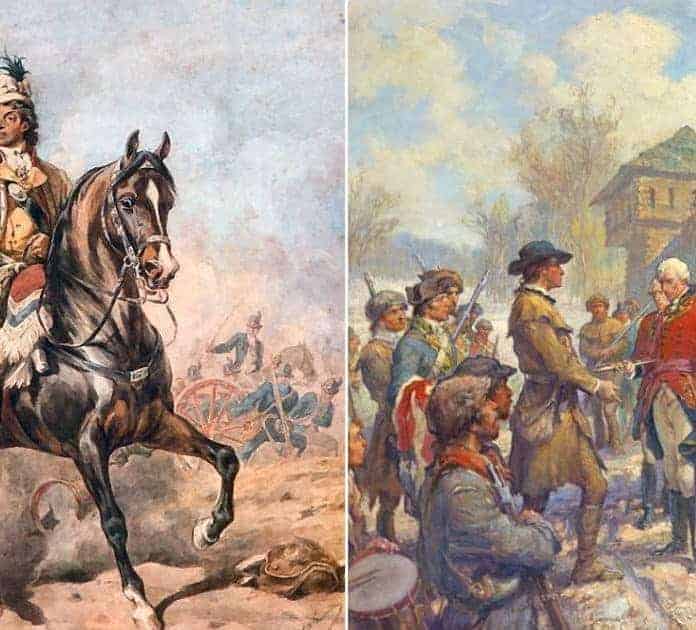 Most Americans recognize the name of Lafayette. The young French aristocrat and soldier who risked his life and fortune to serve the American cause during the War of Independence and is arguably the most famous of the many Europeans who did so. But he was far from alone. Europeans came from several countries and principalities to join the American cause. Some of them were soldiers of fortune, some charlatans, and some gave their lives in the process. Their efforts often provided the inexperienced American army with military expertise in the areas of tactics, battlefield movement, camp construction, engineering and the reduction of enemy fortifications.

While some demanded honors and financial remuneration from a chronically cash-strapped Congress, others served for nothing, or actually – as in the case of Lafayette – spent large amounts of their own money for the privilege of serving the cause of freedom. Many of their names remain part of the American landscape today in the form of names of cities, towns, counties, or landmarks. Many found after the war that they were unable to return to the land of their birth due to the resentment of their former sovereign, others remained having given their lives for their adopted land.

Here then are some foreign warriors who came to help America win its freedom from the British Empire.

One of only eight individuals who have been awarded the status of Honorary Citizen of the United States, Casimir Pulaski is widely regarded as the father of the US Cavalry. As the second son of a Polish nobleman Pulaski did not stand to inherit his father’s estates and thus, as did many second sons of European nobles of the day, chose the army as a career. Poland of the time was largely a puppet state of the Russian Empire, and Pulaski joined a confederation opposing the Russians and their influence over his homeland.

After years of fighting, Pulaski was forced to seek refuge in France when the forces he supported were defeated by those of the Czar. With the knowledge that returning to Poland likely meant death at the hands of the Russians, Pulaski allowed himself to be convinced by the American diplomat in Paris, Benjamin Franklin, to emigrate to America in part to escape imprisonment for indebtedness.

Despite Franklin’s glowing recommendations – it was Franklin who bestowed the title of Count upon the officer, which he did not in fact hold – the Congress had no cavalry to assign him to and no general’s commissions to award him.

Pulaski initially served without any rank other than courtesy and commanded troops at Brandywine which saved the Americans from an even worse defeat than that which they suffered there. Eventually he created a troop which became known as Pulaski’s Legion, and is largely credited with creating what became the American cavalry despite his contentious and imperious personality frequently causing conflicts with fellow officers.

Pulaski served in the American south after the shift of focus to that front, and was in numerous engagements there. He suffered from bouts of malaria, an illness common to that time and place, and served with distinction in South Carolina and Georgia before being mortally wounded before Savannah in the fall of 1779, at the age of 34. Fort Pulaski, outside of Savannah was later named for him, as was the US nuclear missile submarine USS Casimir Pulaski. Days set aside in his name are celebrated in both the State of Illinois and Poland, and numerous statues and other memorials exist to his honor in the United States.