Dining on the Dead: The Cannibals of Cheddar Gorge 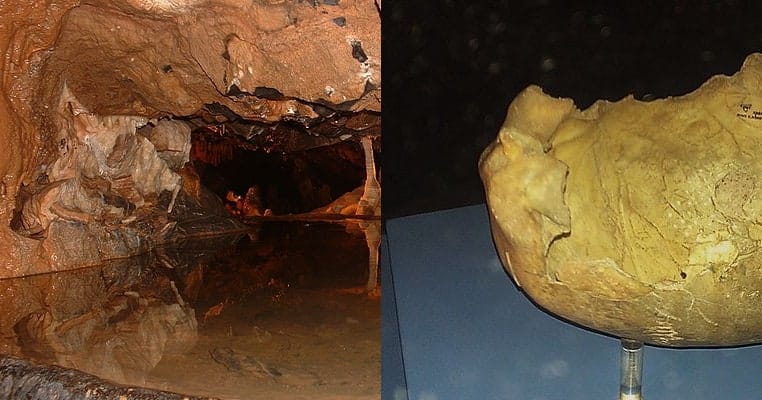 Dining on the Dead: The Cannibals of Cheddar Gorge

Cheddar Gorge in Somerset, England has been a popular tourist attraction since 1838. In their time, the ancient caves have been used to mature the local, world famous Cheddar Cheese. They were also home to 10,000-year-old Cheddar Man, the name given to the oldest known, complete human remains in Britain. Cheddar Man, however, did not belong to the first group of people to settle Cheddar Gorge. For archaeologists have proven that the caves have been home to humans for over 40,000 years. Nor was he amongst the first people to resettle Cheddar after the Ice Age. For they arrived 14,700 years ago.

Known as the Horse People of Cheddar Gorge, these early Britains led a subsistence existence, gathering from the land and hunting the local wildlife- notably horses- that they drove off cliffs before eating. Horses, however, were not the only things these people ate. For grizzly remains found in Gough’s Cave- the very cave where archaeologists uncovered Cheddar Man- proves these early re-settlers were cannibals. However, curious features on the bones suggest that sustenance may not have been the only reason for these grizzly Paleolithic feasts. So why did the Horse people of Cheddar Gorge dine on the dead?

The Horse Hunters of Gough’s Cave

24,000 years ago, a vast ice sheet covered much of North Western Europe. Some areas, such as northern France and southern Britain escaped the ice. However, they were polar deserts, and their climates were too extreme to support life. As a result, for over 9000 years, a substantial part of Europe remained barren and uninhabited. Human groups were confined to ice-free zones in the south of France and the Iberian Peninsula. Then suddenly, 14, 700 years ago, things changed.

Danish scientists examining ice cores in Green land and lake sediments from Germany have found that in less than three years, temperatures rose by 6-7 degrees. The cause of this is still unclear. But what is known is, the ice sheet began to retreat, freeing up more inhabitable land in the previously polar regions of northern Europe. Plants began to grow, and as a result, herds of animals started to move north. Amongst them were herds of horses that were a significant source of food for Paleolithic hunter-gathers. So, as a consequence, people began to move too. Following the horse herds, they expanded into northern France and crossed Doggerland, the land bridge that once linked Britain to the rest of Europe.

A few years later, a group of these Horse Hunters settled in the area of Cheddar Gorge and made their home in Gough’s Cave. They only remained for a generation or two. Then all evidence of their presence stopped. Experts believed this was because birch forests were beginning to take root in the area due to the rising temperatures. However, woodland was not an attractive habitat for horses. So when the herds moved on again, the Horse Hunters of Gough’s cave followed them.

The descendants of these Horse Hunters were driven out of Britain during the Younger Dryas period that occurred between 12900- 11700 when icy conditions temporarily returned to northwestern climes. However, around 2000 years later, people were back in Britain again for good- and once again they were settling in Gough’s Cave. Cheddar man is a relic of this final resettlement of Britain. However, unbeknown to these Mesolithic Britains, a quiet corner of Gough’s Cave was hiding the remains of their predecessors.

Between 1986 and 1992 a team from Britain’s Natural History Museum uncovered a collection of human bones that dated from 14,700 years ago. Analysis showed that disarticulated remains belonged to five people: a 2-3-year-old child, two adolescents, a young adult, and an older individual. The bones were mixed in with animal bones, flint remains, and small mobile pieces of art carved from antler and ivory. However, closer examination showed these human bones were hiding a grizzly secret.

The Secrets of the Bones

The original investigation of the Paleolithic bones in Gough’s cave concluded that they showed signs of cannibalism. The bones all belonged to people who had been disarticulated in the same way as butchered animals. Their corpses had then been systematically stripped of their flesh. The bones showed signs that the flesh was carefully scrapped away to remove every trace of tissue- in some cases with human teeth as well as tools. It was a sensational and disturbing discovery- especially as one of the bodies was of a young child.

In 2017, a further team from the National History Museum re-examined the bones using more up to date technology. They concluded that the bones did indeed belong to bodies that had been systematically disarticulated and stripped of their flesh. Close analysis of cut marks corresponded with scraping and filleting- and 42% of the remains did indeed possess human teeth marks. A third of the bones had also been broken up post-mortem in a way that suggested marrow extraction. To complete the grizzly picture, the edges of some of the skulls had been carefully smoothed to make them into skull cups- after the soft tissue had been carefully removed.

Dr. Silva Bello, part of the Natural History Museum team also agreed with the initial archaeological assessment that the human remains had been cut up and butchered in the same way as the animal bones. This, taken with the other findings provided the 2017 team with “Unequivocal evidence that the bodies were eaten.” However, there were other curious marks on the bones that were not related to the butchering and de-fleshing of the bodies. Natural History Museum expert Jill Cook had first noticed these marks in 1986. Other experts, however, had dismissed them as filleting marks. But, these scores in the bones were found in areas without muscle attachments. So, the modern team decided to investigate them further.

The marks resembled a zigzag pattern, which curiously matched zigzag motifs commonly used in the picturePaleolithic art of the same period. On one of the forearm bones, this pattern covered an area of just over 6 cm. Cook had argued that the marks were made deliberately after the flesh was stripped. Bello and the team decided to look at the construction of the cuts using macro and micro morphometric analysis to help determine if they were part of the de-fleshing process. They found that the structure of the cuts was utterly different from those made during butchery. Cook was right; the marks were deliberate.

More intriguing still was the fact that the carved pattern was made in the same way as the decoration on the animal bone artifacts. However, the fact that the human bones were decorated at all was perplexing for there were relatively few examples of engraved human bones to be found across Paleolithic Europe. Something more than simple cannibalism had been going on in Gough’s cave. But what?

Before the 2017 team accepted the zigzag cuts as a deliberate motif, many experts believed the Gough cave bones to be an example of plain homicidal cannibalism born of necessity. They speculated that the Horse Hunters may have been driven to eating their dead when the Horse Hunter’s main source of food began to disappear. The fact that the bones were then dumped in the same refuse pit as the animal bones lends a certain credibility to this, as does the fact the cave was not occupied for long before the hunters moved on.

The 2017 team believed that there was no reason for this sort of survivalist cannibalism as even if horses were off the menu, other game was not. “Animals like horse and red deer were available,” said Dr. Chris Stringer, the head of human origins at the Natural History museum. “There is also evidence of worked mammoth ivory at the site, indicating that these groups traveled into colder regions as well.”

One thing both schools of though agree on is that the bones do not belong to individuals who were deliberately killed, as there is no sign of associated trauma. For the 2017 team, this is the final proof that the zig zag decorations were part of a mortuary ritual, completed as soon as the bodies were de-fleshed. This practice, known as Endocannibalism has been found in other, historical contexts such as amongst the Amachuaca tribe of Peru. In Endocannibalism, any flesh consumed would have been part of the mortuary ritual and so an act of respect rather than born of necessity.

In this context, the marking of the bones could have been a way to complete the mortuary ritual. “The act of engraving has often been associated with ways of remembering events, places or circumstances — a sort of extension of our memory outside our body,” Dr Bello explained“In this case, however, the engraving of this bone may have been a sort of memory more directly related to the deceased, and an intrinsic part of the cannibalistic ritual itself.”

However, there is the possibility that the bodies in Gough’s cave weren’t the victims of cannibalism at all and that their disarticulation was for purely practical reasons. Although not dismissing the possibility that the bodies were consumed by other humans, the late Dr. Roger Jacobi of the Oxford Radiocarbon unit raised the possibility that the bones could have belonged to members of the tribe who died some distance from Gough’s cave. As a consequence, their bodies could have been cut up and stripped of flesh to make them more portable- rather than for consumption. In this context, the decoration of the bones could still have been a ritual mark of respect but without any associated ritual dining on the dead.

Where Do We Get This Stuff? Here are our Sources.