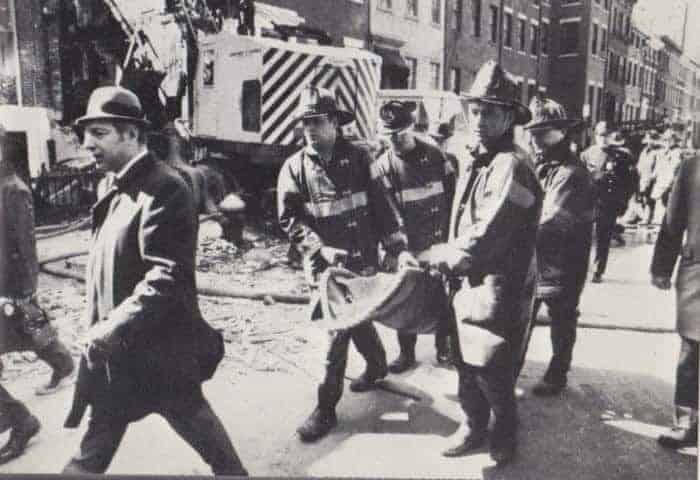 In June 1969, the SDS held a convention, and the organization became divided. The Weathermen and the Progressive Labor Party split the SDS. Oughton and Ayers both followed The Weathermen, which was the more radical and violent of the two.

Oughton actively passed out pamphlets to high school students about her strong opinions in Flint, Michigan, which led to one of her many arrests. In Chicago, Oughton participated in the “days of rage” in which The Weathermen went on raids against the police.

In October 1969, the extreme Weathermen group gathered in Chicago. They organized a protest against what had happened there a year before during the Democratic National Convention of 1968, where police publicly beat thousands of Vietnam War protestors.

It was labeled as a police riot by the government. Young Americans viewed televised pictures of city officers clubbing demonstrators, which angered them enough to respond to the police brutality. Some of them fought violence with violence. After the Democratic National Convention of 1968, a poll revealed that an overwhelming 368,000 young citizens considered themselves revolutionaries. The Weathermen desired to “bring the war back home.”

Although massive crowds marched for the defendants’ protest, The Weathermen simply could not mobilize the young Chicagoans. Ultimately, more of The Weatherman suffered from injuries and financial damage than their targets, and 200 of the members were arrested that day. As the American people welcomed a new decade, the violent words and actions of The Weathermen continued to frighten them. Oughton and the others held a secret meeting in Flint, Michigan and planned a wave of terrorist bombings.

From 1970 to 1972, the passionate group took credit for eight bombings including the New York City police headquarters, part of the U.S. Capitol, the Pentagon, and the Army’s mathematics lab center in Madison, Wisconsin. Oughton was never officially accused of conspiracy to plot a bombing or the action bombing itself.

On March 6, 1970, Oughton and four other members of The Weathermen were working in a townhouse basement in Greenwich Village in New York City. The location was specifically used as a bomb factory. The 11th Street house accidentally blew up and killed three people. After discovering a severed finger, 28-year-old Diana Oughton was identified as one of the victims.

A Shift in Power

After all of the arrests, bombings, and deaths, the violent organization was forced to go underground. With hardly any support left, the members scattered; some assumed fake identities, while others connected with the Black Panther Party.

The group became known as The Weather Underground and announced a “Declaration of War” against the U.S. They still desired to persuade young Americans, especially white people “into armed revolution,” which was required to stop the injustice against African-Americans and other minorities both at home and overseas in the Vietnam War. By 1976, the organization mostly dissolved. That did not stop a few members from randomly robbing banks and bombing buildings in the name of The Weather Underground until 1985.

The radical group once had good intentions rooted in the SDS, full of ethos and compassion, but after a militant feature was added, and the belief that violence was required for change, more people were hurt than helped, including Diana Oughton.