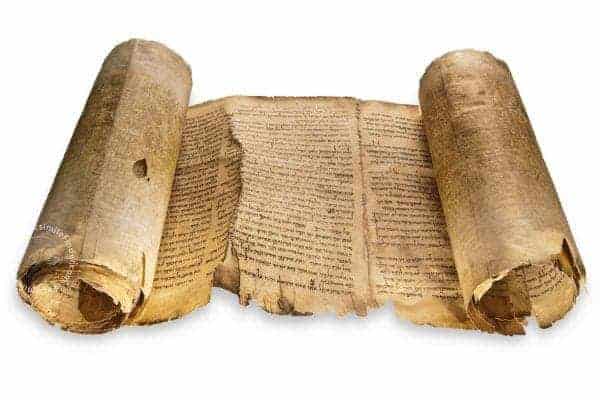 The Dead Sea Scrolls are famous for being ancient texts found in the Qumran Caves in 1946, 1956, and 2017. They are 981 different manuscripts that date from around 408 BCE to 318 CE. They are among the oldest religious texts ever discovered and they contain copies of texts from the Hebrew Scriptures and other religious texts. There are even sectarian manuscripts that offer details about the rules and beliefs of different groups within Judaism.

But there is one scroll that is unlike any of the others. Out of the 981 scrolls discovered, there is one scroll that has confounded scholars. The first thing that sets this scroll apart was that it was not discovered by the Bedouins, like most of the dead sea scrolls. This scroll was found by an archaeologist on March 14, 1952. It was the last of the 15 scrolls to be found in cave 3 at Qumran.

The second thing that sets the scroll apart is that it is made of two thin rolls of copper mixed with 1% tin. All of the other scrolls that were found in the caves were made of parchment or papyrus. In fact, the corroded metal was not even able to be unrolled. Instead the copper rolls were cut in to thin strips in order to be taken apart and read. The words written on the scroll were translated.

It was the text that was on the scroll that yet again separated it from anything else found in the caves. It was not a religious text or a literary work. It is not written in the same Hebrew with the same orthography or paleography as the other scrolls. It also had different dating than the other scrolls that have been found more recently.

The lists tell of treasures weighing tons and over 4,600 talents of precious metals. Estimates today put the total haul of all 64 treasure locations at a value of over 1 billion dollars. Where did the treasure come from? Who did it belong to? Where is it now?

Others credit the treasure as being that of the Second Temple, even though historical records have led many to believe that all of the treasure of the second temple was in the temple when it was destroyed by the Romans. It is possible that the treasure was secretly removed from the temple before the arrival of the Romans and then divided and hidden in order to keep it from being found by the Romans.

Understandably, most scholars are more concerned with where the treasure may be now than where it originally came from. There is debate among scholars about whether or not the treasure is real. Two of the first translators of the document have very different opinions about what it may be. J.T. Milik, who offered the official translation of the scroll, believes it is a work of fiction. Milik said that it was common for there to be Jewish folklore about the treasure of the First Temple and he believed this was one example.

John Allegro, who also offered a translation of the scroll, believed it was real because there is no story at all to the scroll. The scroll is just an itemized list of locations and treasure contents. There is not literary aspect to the scroll at all and the different style makes it unlikely to be a simple work of fiction. Copper was expensive, and writing on copper was time consuming. It seems far more likely to John Allegro that only someone entrusted to protect a great treasure would go through the extra effort of putting it on copper.

Allegro gathered a team and set off on a treasure hunt. However, it was no easy feat to find the treasure, because over the course of 2,000 years, names of places had changed, sites were destroyed, and names may have been attached to other locations or different places. Allegro had a few ideas about some of the treasure locations and decided to act on them.

In 1964, another man named Vendyl Jones set out to hunt for the treasure and believes he found part of it. He and his expedition team found a small earthen vessel filled will sweet-smelling oil to cover sacrifices. Jones believes that the sacred vessel is one of the items listed on the scroll. Richard Freund also believes that part of the treasure was found during a 1960 expedition. After examining a cave, the expedition found numerous bronze implements buried at exactly the depth listed in the copper scroll.

There was also a stoneware jar and pieces of a scroll which are mentioned in the copper scroll. There is debate about whether the items found could have been part of a Jewish treasure because they contain pagan symbols, but Freund argues that it is possible since other Jewish objects have been found with pagan symbols, and King Herod was a very Romanized Jew who may have allowed the pagan symbols.

None of the other treasure has been found yet. Item 64 on the list tells of another scroll that contains information and an itemized list. The other scroll has never been found, and some have theorized that both scrolls are needed to find the treasures.