This Day In History: The Unknown American Soldier From WWI is chosen (1921) 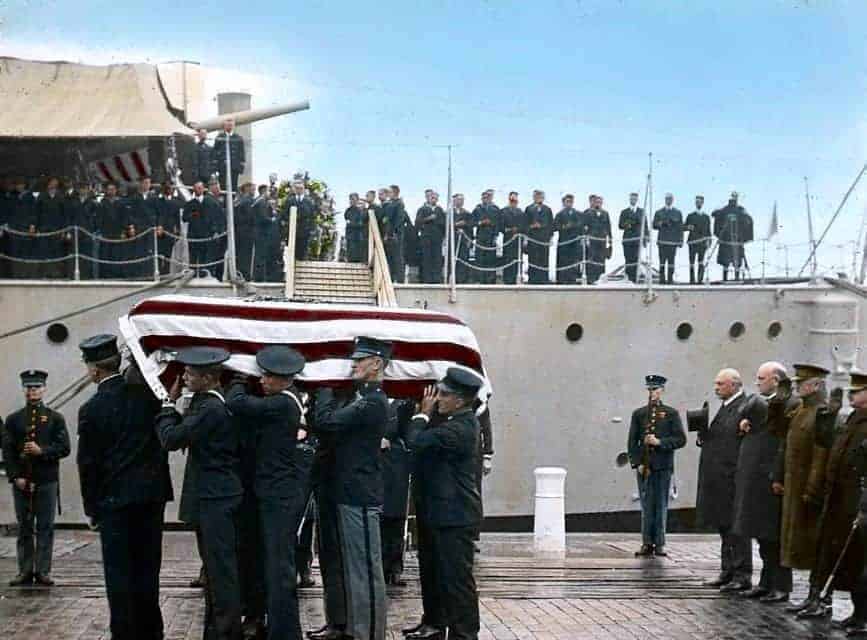 This Day In History: The Unknown American Soldier From WWI is chosen (1921)

On October the 24th, in 1921, almost three years after the end of WWI in the French town of Chalons-sur-Marne, a remarkable ceremony took place. An American officer selected the nation’s first ‘unknown soldier’ . This soldier whose identity was not known was selected to be honored and to represent some 78,000 US soldiers, marines and airmen killed on the Western Front. This plan had been approved by the United States Congress.

According to documents of the Army Graves Registration Service a body set up to record the Americans who made the ultimate sacrifice, some four unidentified American servicemen who had been killed in action were transported to the French town. The bodies had been disinterred from American cemeteries. The four dead bodies were Americans who had been killed in some of the great battles on the Western Front such as Saint-Mihiel. The service records showed that the dead soldiers were completely unknown’ and other that they had died in battle nothing else was known about them. The bodies had not been claimed by any of their colleagues. Their rank or unit was also unknown. This was very common in WWI when many of the dead were never identified and came to be simply known as an ‘Unknown soldier’.

The four bodies were taken to a hall in the town of Chalons-sur-Marne on October 23, 1921. The following day some American and French officials entered the hall where the four coffins with the unidentified remains were draped with the American flag. Then an American soldier a Sergeant Edward Younger was given the task of selecting one coffin. The remains in the coffin, selected would be designated the Unknown Soldier. The Sergeant entered the hall and walked around the coffins three times and then with great solemnity laid white flowers on one of the caskets. The Sergeant then saluted the coffin, with the flowers laid on it. The remaining three coffins were re-buried.

The selected casket was provided with the inscription “An Unknown American who gave his life in the World War,”

The casket was taken under a military escort first to Paris and then to the French Port of Le Harve and it was loaded onto an Ocean Liner. From here it was taken to New York and the casket was then taken to the Arlington National Cemetery, near Washington, D.C on the first of November, 1921. The Unknown Soldier was buried in a specially designed marble tomb. The Tomb of the Unknown Soldier was greatly expanded in 1931. The Tomb of the Unknown Soldier from WWI is located among other the ‘Tombs of the Unknowns’ from WWII, Korean War, and the Vietnam War in Arlington. The Tomb is guarded by a military unit, known as the tomb guards, who are selected from serving soldiers in the American army.