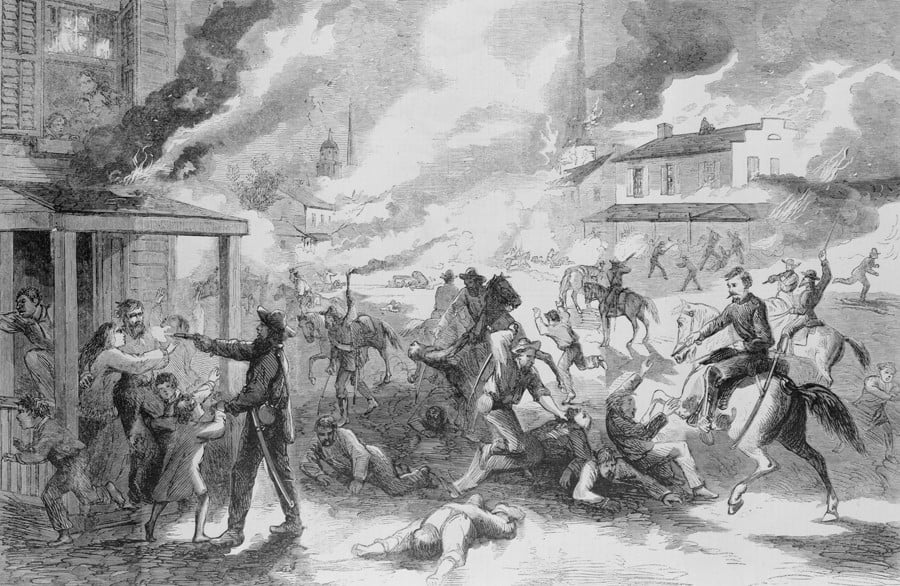 On this day in 1863, during the America Civil War, a band of Confederate guerillas attacked Baxter Springs in Kansas. They were led by the infamous William Clarke Quantrill who had carried out numerous bloody raids in Kansas, which was sympathetic to the Union.

Quantrill’s unit attacked a Federal outpost at Baxter Springs that was held by a Yankee regiment. They Yankees were at first taken by surprise but they managed to barricade themselves inside of the post and the lightly armed Confederates could not dislodge them. A Union detachment heard the battle and marched on Baxter Springs. The Confederates feared that they would be attacked from the rear or even surrounded. Quantrill’s attack on Baxter Springs was repulsed and he ordered a retreat. As Quantrill’s raiders were making their way home to Missouri when they came across a unit of Union troops. The troops were attached to the headquarters of the Union commander in Kansas, General Blunt. He and his men were in the process of moving their headquarters to Arkansas. The detachment was made up of clerks and office workers. General Blunt did not realize at first that Quantrill and his men were Confederates because they were in the blue uniforms of the Union army, this was a deliberate tactic by the raiders in order to confuse the Yankees. As a result, the guerrilla band was able to approach the Union soldiers and then suddenly attacked them. It was a massacre. The Confederates hunted down the Union troops that tried to escape them. In total, some 70 men were killed by Quantrill and his raiders. General Blunt was able to escape but he was blamed for the massacre and he was later removed from his command. Quantrill after the attack on Blunt’s column demanded the surrender of Baxter Springs but the force largely made up of African-American soldiers refused to surrender and the raiders gave up their attack on the fort.

After the massacre, Quantrill turned his attention elsewhere and he raided all along the Kansas-Missouri border and also attacked Indian tribes who had sided with the Federal government. The raiders left a trail of blood and destruction all the way down to Texas.

The fighting in Kansas and Missouri was very bloody during the Civil War, because unlike other theatres, the conflict in these states was largely one that was characterized by guerrilla tactics. One of the worst massacres of the war happened in August 1863 when Quantrill and some 400 of his men attack the town of Lawrence in Eastern Kansas. The town was a stronghold of the abolitionist cause in Kansas and this made it a target for Quantrill. He and his men murdered some 150 men and set fire to the town and managed to escape a superior Union cavalry force that pursued them. When the northeast of Kansas became closely guarded by Union troops, after the attack and massacre at Baxter Springs, Quantrill and his men, increasingly turned their attention to the south of Kansas.