This Day in History: The Marshall Plan Is Approved (1948) 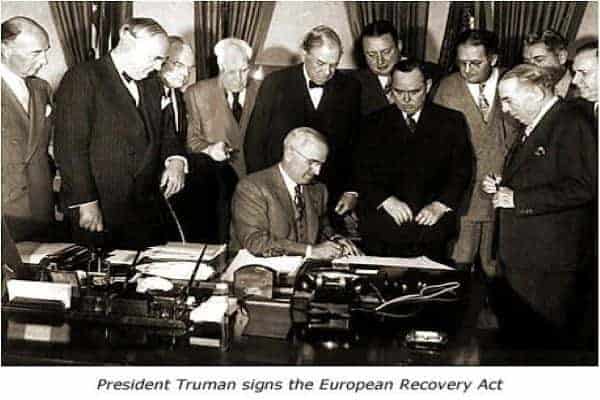 This Day in History: The Marshall Plan Is Approved (1948)

It is no surprise that Europe was in shambles at the end of World War II. The total number of casualties taken by all sides of the war in Europe alone were staggering. Estimates are sketchy, but historians generally agree that the war cost between 15 and 30 million lives, and that was just military members. You can almost double those numbers if civilian casualties are added in. It was a true human tragedy that even to this day the world hasn’t completely recovered from.

On this day in 1948, the first step to returning Europe to its former self was made by the United States. It was called the Marshall Plan, and was organized by then Secretary of State George Marshall. It was meant to accomplish many things in an effort to rebuild Western Europe, including:

The plan was approved, and $12 billion dollars was sent to Western Europe. That’s nearly $120 billion in today’s money, which was unprecedented. The plan went into effect on April 8, 1948, and would last four years. It affected 18 countries, and was originally meant to last through 1953, but conservative Republicans blocked the extension of the plan and cancelled the last two years of benefits. The reason behind this was the growing cost of the United States’ participation in the Korean War.

The outcome of the plan for the years it was active was tremendous. Between 1948 and 1952, the European economy grew faster than any other time in history. Agricultural and industrial production expanded past pre-war levels, and homelessness and starvation fell to pre-war levels as well.

The Marshall Plan was not solely responsible for the success of the European recovery. After years of war, it is thought by historians that Europe would have experienced that growth even without the Marshall Plan taking effect. Most still agree that the plan played a significant role in speeding up the recovery.