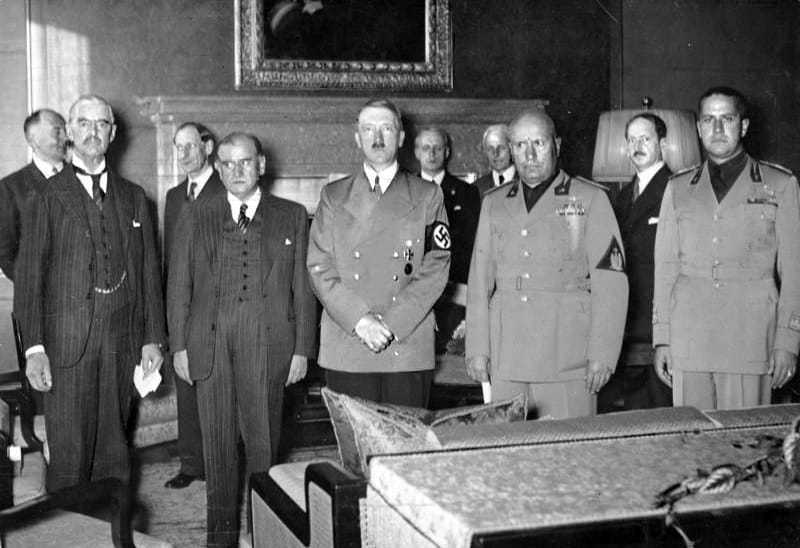 This Day In History: Hitler Signs the Munich Pact (1938)

On this day in 1938, the British and French prime ministers sign the Munich Pact with the Nazi leader Adolf Hitler. The pact is seen as averting a general war in Europe. The agreement was believed to be a way of defusing the Czechoslovakian crisis.

Hitler was determined to unite all Germans and to make sure that they all lived in the ‘Fatherland’. Many Germans found themselves living in non-German countries after the Treaty of Versailles. After the end of WWI, there were significant German minorities in Eastern Europe. There were one million Germans in the Sudetenland in Czechoslovakia, alone. They began to agitate to reunite with the German Fatherland, especially after Hitler’s occupation of Austria and some even resorted to violence. The Nazis had probably encouraged this unrest as they wanted to annex some or all of Czechoslovakia.

Hitler began to claim in 1938 that the Czechs were persecuting the German minority and he began to threaten Czechoslovakia. It seemed to many that Hitler was now turning his attention to Czechoslovakia and that he would invade the country. Prague was in no position to resist the Germans and they contacted London and Paris. The Czechs hoped that the British and French would help them and save their country from invasion or partition. The British Prime Minister of Great Britain Neville Chamberlin visited Berlin twice in the hope of averting war.

On September the 22nd, Hitler demanded that all of the Sudetenland should be handed over to Germany. The government in Prague believed that a German invasion was inevitable and mobilized their army. France also began to mobilize its troops and it seemed that war was inevitable. However, they were not ready for war and the French Prime Minister joined Chamberlin in a last-ditch peace effort. Both men entered into negotiation with Hitler and they came to an agreement. Hitler was to have his way and he conquered Sudetenland without firing a shot, in return for respecting the territorial integrity of the rest of Czechoslovakia. The governments of London and Paris pressurized Prague to give up the Sudetenland for the peace of Europe. Prague had to agree to Hitler’s demands as they had been effectively abandoned by the Prime Ministers of France and Britain.

The French Prime Minister hated the Munich Pact’s appeasement of the Nazis, but Chamberlain was elated and saw it as a personal triumph. He returned to London and told the British public that he and Hitler because of the Munich Pact had secured “peace in our time.” The Germans’ takeover of the Sudetenland began the next day and they absorbed the rest of Czechoslovakia the following year. Some have called this the ‘Rape of Czechoslovakia’. Many in London, denounced the Munich Pact for its ‘appeasement of Hitler’ and that it would only encourage him to demand more and more territory. The foremost critic of appeasement was Winston Churchill and he was proved right when the Germans invaded Poland in September 1939.