This Day In History: Geronimo Surrenders to the American Army (1886) 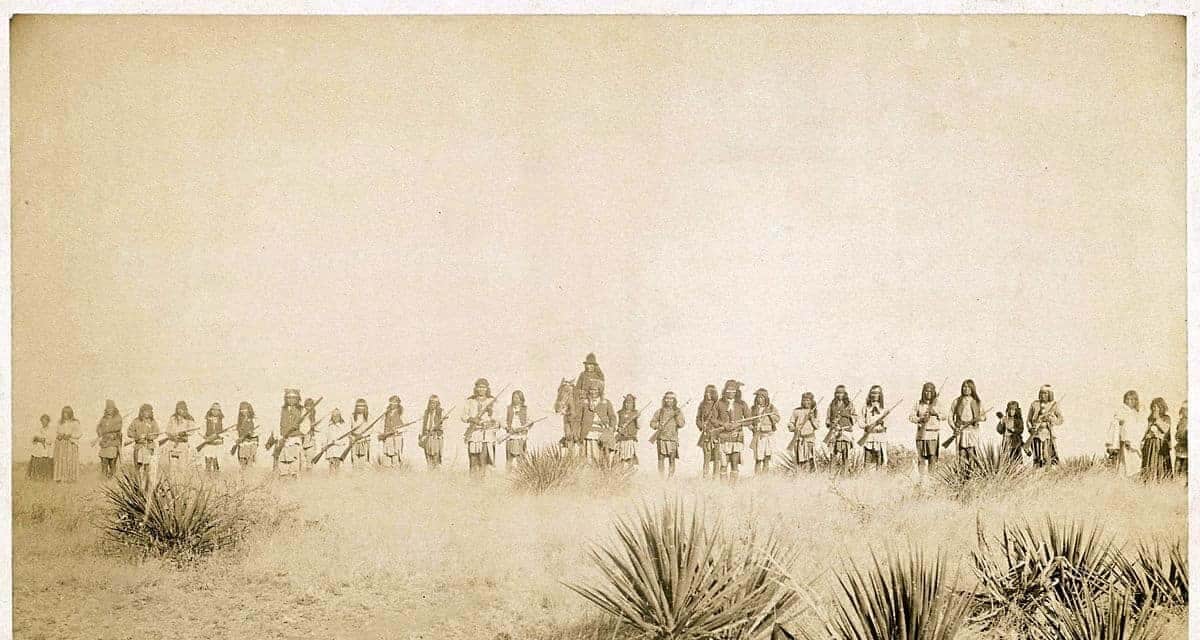 This Day In History: Geronimo Surrenders to the American Army (1886)

On this day in history in 1886, the famous Apache chief Geronimo surrenders to the U.S. cavalry. He had fought the Americans and the Mexicans for almost three decades. He bravely fought all those who threatened his homeland and his people. He has gone down in history as one of the greatest Apaches and also one of the greatest Native Americans. General Nelson Miles accepted Geronimo’s surrender, he was the last chief to surrender in the southwest. His surrender marked the official end of the Indian Wars in the southwest of the United States.

Geronimo was born in 1829 or 1830 and he grew up in modern day Arizona and Mexico. His tribe, the Chiricahua Apaches, clashed with white settlers who wanted to farm their land. In 1858, Geronimo’s family was murdered by Mexican troops. Enraged, Geronimo swore revenge against the Mexicans and the Americans. He led many raids on Mexican territory and he also attacked and killed many American settlers in Arizona and elsewhere in the South West. He proved to be a great leader and a formidable warrior. In 1874 the US Federal government decided that the Apache nation had to live on a reservation. The reservation meant that the Apaches were placed under the direct supervision of the army.

1885, Geronimo and some 160 followers fled the reservation one last time. They were pursued by a force of US Cavalry. Some 5000 US troops followed Geronimo and his band into Mexico. After several months on the run evading the Americans, the Indians were exhausted. They had little food or supplies and the Mexicans were also gathering their forces to attack them. In March 1886, General George Crook forced Geronimo to surrender. Once again Geronimo quickly escaped and continued his raiding and terrorized many Americans and Mexicans. General Nelson Miles replaced General Crook and he was much more aggressive than his predecessor and in the Fall of 1886 he forced Geronimo to surrender and this time, he would not escape. Geronimo and his band of Apaches are sent first to Florida and eventually ending up at the Comanche and Kiowa reservation near Fort Sill, in Oklahoma. The great war chief did give up his ways and became a successful farmer. He later also converted to Christianity and was regarded as a devout Christian, but may have returned to his old faith before he died.

Geronimo dictated his life story in 1906 to a ghostwriter and his autobiography was published as Geronimo’s Story of His Life. He died on the reservation in Oklahoma on February the 17th, 1909.