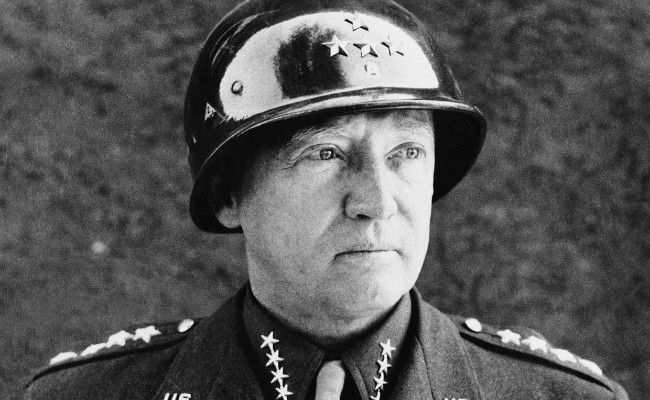 On this day, in 1945 one of the greatest American generals of WWII dies. General George S. Patton, the famous war-time leader, died not from wounds in battle but rather from a car accident. He died at the age of 60 and he died in a freak accident after the war had been won. Patton came form a long line of soldiers. He had attended West Point and had graduated in 1909 near the top of his class. Patton was a talented sportsman and represented the US in the pentathlon in the 1912 Olympiad. He went on to serve on the western front. Patton served in a tank unit and from then on he was convinced that the tank was the key to the future of warfare. He believed that the tank with its mobility and fire-power would decide the next great war.

Patton was given a command of an American Army in the wake of a defeat in Tunisia in 1942. He quickly re-organized the Americans units and turned them into a formidable fighting force and helped to drive the Germans and Italians from North Africa. Later Patton and his army played a pivotal role in the capture of Palermo, Sicily. Patton was a controversial figure and he was relieved of duties after striking a shell-shocked soldier. He was later recalled by General Marshall and was given command of an army in France. Patton led a dash across France and helped to drive the Germans out of that country. He played a prominent role in the Battle of the Bulge and he broke the German siege of Bastogne. Patton developed a brilliant strategy that allowed the Allies to cross the Rhine and he and his army were then able to sweep across Southern Germany and into Austria. Old ‘Blood and Guts’ as his men called him was advancing into Czechoslovakia when he was ordered to stop. Patton resented this, especially as it was done to please the communists.

Patton was a daring soldier but he was not a diplomat. He was frequently in trouble because of his big mouth. In the immediate aftermath of the war, he criticized the American policy of denazification and the arrest and detention of Nazis. He wanted them to play a part in resisting Soviet influence in Germany. This got him into trouble with Eisenhower who transferred Patton as punishment. Old Blood and Guts was also anxious to be given command of an army in the Pacific. He wanted to play a role in the anticipated invasion of Japan. However, the dropping of the A-bomb ended Patton’s hopes. Patton was given command of the 15th Army Group and in December 1945 he was involved in a car accident. The staff care he was traveling in-skidded off the road and Patton’s neck was broken and he was to die two weeks later in an army hospital.