This Day In History: The British Breakthrough the Gothic Line (1944) 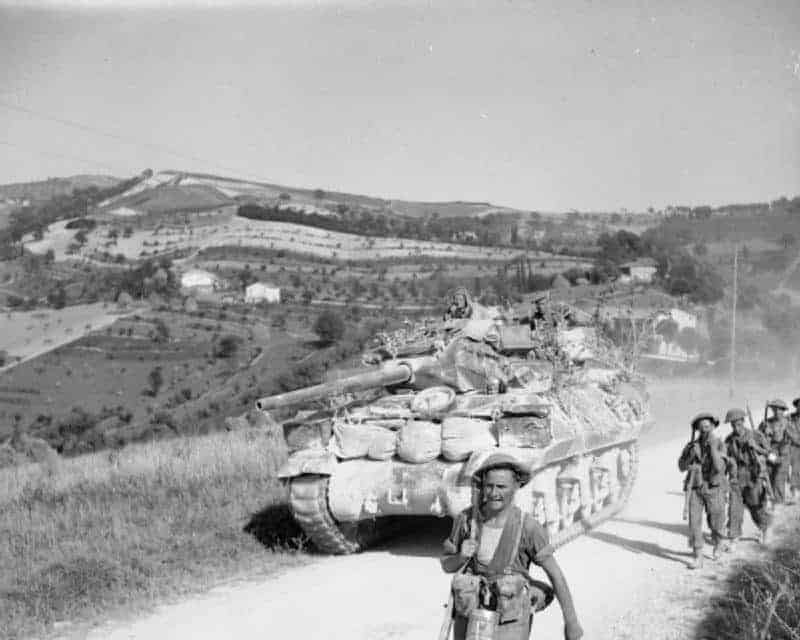 This Day In History: The British Breakthrough the Gothic Line (1944)

On this day in history in 1944, the British break through the German ‘ “Gothic Line,” a defensive line drawn across northern Italy. The Gothic Line had been established by the Germans after they had been forced to evacuate Rome some months earlier. The Allies had initially landed in Sicily and taken the island. The Germans had then occupied the rest of Italy. An Allied force had landed in mainland Italy and had driven the Germans back, at first. However, they had established a defensive line in the mountains of Southern Italy, with their main strongpoint at Monte Cassino. The Americans and other allied forces could not break through this defensive line. They tried to outflank the Germans by landing several divisions at Anzio, but this force was originally pinned down on a narrow beachhead. It was only when Polish forces had seized Monte Cassino that the German defensive line broke.

The Allies had pushed the German occupying troops on the Italian peninsula farther to the north. The Americans under the command of General Mark Clark had captured Rome. Now the Germans had dug in north of the city of Florence. The line was built earlier in the year, this defensive line consisted of fortified towns, stretching from Pisa in the west to Pescara in the east. The Germans had chosen the area because it was hilly and mountainous and their positions would be difficult to take by assault. The Germans were outnumbered by the allies. However, they did have the support of Italian Fascists. Mussolini had been ousted from power, but his ally Hitler had rescued him and set him up as leader of the so-called Salo Republic (Northern Italy). The Gothic Line as it came to be known fortified some of the main centers of the Renaissance in Italy, which housed many priceless works of art. One of these was Siena, home to much glorious medieval and Renaissance art. However, the Gothic Line was in an area where Italian partisans, many of them communists were active. They often attacked the Germans and their Italian fascist allies. These partisans caused confusion behind the Germans’ own lines and this was of great assistance to the Allies.
The Germans held up the allies for some time at the Gothic Line. The 8th army (The Desert Rats) were chosen to lead an attack. The allies adopted a series of feints and surprise attacks to confuse the Germans. After these, the British General Harold Alexander, opened the offensive on August 25, surprised the Germans, and the 8th Army swept through to the Plain of Lombardy, breaking through the Gothic Line. The Germans, however, retreated to another defensive line in the mountains to the north of the Gothic Line. They and their fascist allies, however, only controlled a very small area of Italy in the extreme north, which they largely held until 1945.